The third volume of Odd Tangle-Hair’s Saga finds our hero in Golden Miklagard (Constantinople), posing as an ambassador from the Grand Prince of Rus. But his real mission is to assassinate his former master, Harald the Ruthless, who has now risen high in the Emperor’s Varangian Guard. Odd is dazzled by the brilliance of the Byzantine capital and its beating heart–the Great Palace, with the astonishing Throne of Solomon that levitates above the heads of kneeling courtiers.

Here, Odd will meet Constantine Psellus, an ambitious young bureaucrat who mentors him in the ways of the court. He will be drawn into an intrigue that involves the Empress Zoe, who spends her days brewing vats of perfume, and John the Guardian of Orphans, the powerful and sinister eunuch who schemes to advance his family. And Odd will fall in love with Selene, an alchemist’s daughter, who supports herself by gambling in the waterfront taverns.

Finally, after a hard-fought campaign against the Saracens in Sicily and the overthrow of an Emperor, Odd reaches the pinnacle of power and believes he has vanquished his enemy Harald once and for all.
Then disaster overwhelms him.

Praise for The Varangian

“Thoroughly effective at explaining the intriguing and highly complex circumstances of the time period, Macbain’s (The Ice Queen, 2015, etc.) book shines in a way that only historical fiction can. Who needs King Jon Snow in Game of Thrones when one can get a glimpse of the historically real and undeniably sinister John the Guardian of Orphans? Even the most terrifying dragon pales in comparison to the sheer horror of a society so comfortable with castration. As the story ventures outside of Constantinople, the reader is treated to a plot that can only be described as epic … a highly entertaining Viking adventure.” – Kirkus Reviews

“This is the third and final of Macbain’s Odd Tangle-Hair novels. All three have been spellbinding in their storytelling, though this one may be the best. Odd’s journey takes us around the Mediterranean and eastern European world, and all the way north back to Iceland. The characters are wonderful, the story intriguing, the combat real but never superfluous, and Odd makes for the perfect protagonist. Highly recommended.” – Historical Novel Society

“Written by a historian with deep understanding of the cultures, peoples, and languages of this world, The Varangian speaks with an authoritative and compelling voice that can equally present naval battles decided by Greek Fire and court intrigue culminating in advancement to lucrative rank or in mutilation and blinding. This is a masterfully written and suspenseful tale that weaves fictional characters into the dramatic story of eleventh-century Byzantium and ambitious women and men, some home grown and some drawn from afar, who aimed to profit from an empire of legendary wealth and splendor.” – Emily Albu, Professor of Medieval and Byzantine Studies, UC, Davis

“The Varangian is the third and final volume of Bruce Macbain’s Odd Tangle-Hair’s Saga, and like the first two entries, it is as compelling and wild a ride as historical fiction offers. Macbain brilliantly weaves in his vast knowledge of 11th century Viking and Byzantine life with a great storyteller’s ability to drive the plot forward, a plot filled with intrigue, violence, betrayal, and lust.” – Barton Kunstler, author of The Hothouse Effect

“Detailed and vivid writing.” -Albert Noyer, author of the Getorius and Arcadia Mysteries

I was trained as a Classicist, my first two novels are set in ancient Rome, I love the Mediterranean, I hate ice and snow and suffer through Boston winters with gritted teeth. How then do I happen to be writing about Viking Age Scandinavia?

It all goes back to Prince Valiant in the Days of King Arthur, that wonderful comic strip written and drawn by Hal Foster from 1937 until the mid-1970’s.

On any Sunday morning of my youth you would have found me lying on the living room rug with the comic section of the New York Journal American spread open before me. It must have been a dozen pages thick, or so it seems to me now. Those of you too young to remember the golden age of comics have no idea what you’re missing. Let me just recite the names. Flash Gordon, Tarzan, The Phantom, Terry and the Pirates, Blondie, Lil’ Abner, Dick Tracy, Joe Palooka, Barney Google, Smokey Stover…and I could go on, but a tear is coming to my eye. What a loss that we don’t have these anymore, or anything to compare with them!

Above them all, though, was Prince Valiant. He had a page boy haircut, smooth cheeks, an ageless face; he lived in Ultima Thule with his blond wife, Queen Aleta, and a whole cast of Vikings and Arthurian knights. He fought barbarians, and occasionally dragons (though these appeared less often as the strip aged). Yes, it was all silly—but the art work! Foster was an amazing draughtsman. No one could render castles or misty vistas or storms at sea or swirling battle scenes the way he could in those big panel illustrations. You could (and I did) spend long minutes studying every small detail of them, drawn into the world he created. 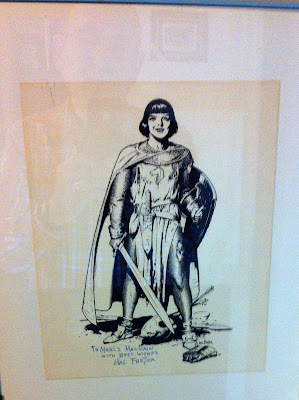 I never met him but my father once did and got from him an autographed drawing, which I reproduce here. I’ve had it for sixty-some years and it now hangs on the wall above my computer monitor. I look at it often as I create my own Vikings, my own Ultima Thule.

To win a copy of The Varangian by Bruce Macbain, please enter via the Gleam form below. Three copies are up for grabs!

Giveaway ends at 11:59pm EST on April 27th. You must be 18 or older to enter. – Giveaway is open to residents in the US & Canada only. – Only one entry per household. – All giveaway entrants agree to be honest and not cheat the systems; any suspect of fraud is decided upon by blog/site owner and the sponsor, and entrants may be disqualified at our discretion.  Winner has 48 hours to claim prize or new winner is chosen. 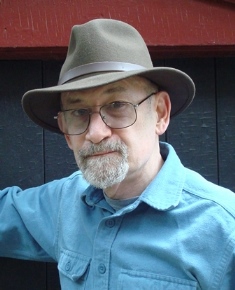 Bruce Macbain holds degrees in Classics and Ancient History and was formerly an Assistant Professor of Classics at Boston University. He decided to stop writing scholarly articles (which almost no one read) and turn his expertise to fiction—a much more congenial medium. His previous novels include two mysteries set in ancient Rome (Roman Games, The Bull Slayer) and the first two novels in the Odd Tangle-Hair series (Odin’s Child, The Ice Queen).
For more information, please visit Bruce MacBain’s website. You can also find him on Facebook, Twitter, Google+, and Goodreads.