Join Historian, Matthew Lewis, as he shares the inspiration behind his fabulous new book — Stephen and Matilda:Cousins of Anarchy #History #NewRelease @MattLewisAuthor


Stephen and Matilda
Cousins of Anarchy
By Matthew Lewis 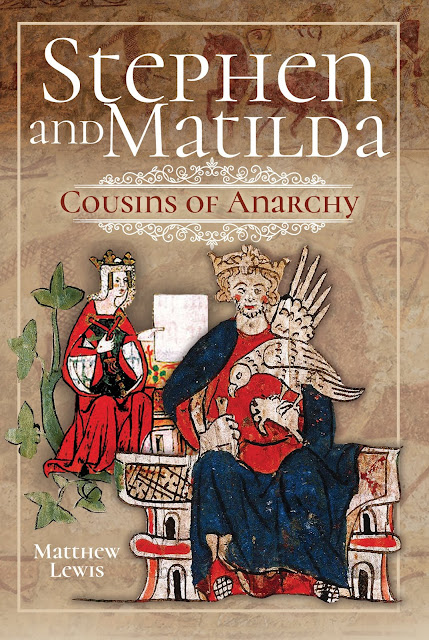 The Anarchy was the first civil war in post-Conquest England, enduring throughout the reign of King Stephen between 1135 and 1154. It ultimately brought about the end of the Norman dynasty and the birth of the mighty Plantagenet kings. When Henry I died having lost his only legitimate son in a shipwreck, he had caused all of his barons to swear to recognize his daughter Matilda, widow of the Holy Roman Emperor, as his heir and remarried her to Geoffrey, Count of Anjou. When she was slow to move to England on her father's death, Henry's favourite nephew Stephen of Blois rushed to have himself crowned, much as Henry himself had done on the death of his brother William Rufus. Supported by his brother Henry, Bishop of Winchester, Stephen made a promising start, but Matilda would not give up her birthright and tried to hold the English barons to their oaths. The result was more than a decade of civil war that saw England split apart. Empress Matilda is often remembered as aloof and high-handed, Stephen as ineffective and indecisive. By following both sides of the dispute and seeking to understand their actions and motivations, Matthew Lewis aims to reach a more rounded understanding of this crucial period of English history and asks to what extent there really was anarchy.

The Anarchy. Now there’s a name to conjure with. It’s a proper, meaty name for a civil war. The Wars of the Roses sounds a bit flowery, and by the seventeenth century, we could do no better than The Civil War. The anarchy leaves you in no doubt as to what kind of chaos and barbarism was going on. Naming internal conflicts in England seems to have peaked in the twelfth century.

My previous focus has generally been around the Wars of the Roses in the fifteenth century and some of the key individuals within that period. I think this interest in a period of civil war and an appreciation that it was far from the simple, clean, Lancaster vs York story that often makes the headlines lent The Anarchy a fascination for me. If the Wars of the Roses isn’t what it is generally perceived to be, was The Anarchy similarly complex and misrepresented?

I approached the book as almost a joint biography of the two main protagonists – King Stephen and Empress Matilda. The narrative switches focus between each side of the civil conflict in each chapter to try and retain a balance in examining the motives and escalating actions of the cousins. Traditionally, Stephen is seen as a nice guy who made a rubbish king – too weak, too easily led and too ineffectual. Matilda has long been seen through the eyes of the monkish chroniclers who wrote down their accounts of the events – abrasive, belligerent and unwomanly.

That last charge is the most interesting and probably the one that clings most tightly to the Empress’s reputation still, nearly 800 years later. It is a symptom of the misogyny of the Church, and, to be fair, the wider population, that whatever Matilda did in her efforts to gain the inheritance she believed was rightfully hers would doom her to criticism based on her sex. In 1141, when she came within a hair’s breadth of the throne, she attracted intense criticism for her attitude and behaviour. If you break down what she was accused of – being authoritarian, making decisions herself, punishing her opponents – they are all things a new king would have been praised for. In fact, some of them are things Stephen is criticised for failing to be.

The problem for Matilda was that men couldn’t fathom how they would be subservient to a woman. If she behaved like a queen, in the sense of the consort of a king, men would lack a real leader to make decisions, since a queen was supposed to support her husband’s role as king. If she acted like a king, who happened to be female, she was condemned as lacking femininity and acting in such an outrageous manner that men could not follow her. Perhaps she might have looked for a third way, a compromise, but she would doubtless have been criticised for that too. Being a woman was Empress Matilda’s Catch 22.

Her problems were exacerbated by Queen Matilda (because I’m on familiar ground here, with almost everyone sharing three or four different names!). Stephen’s wife, Matilda of Boulogne, offered a perfect contrast to the problems men saw in Empress Matilda. She was able to appear, to their sensibilities, reasonable in making efforts to protect her husband and children’s interests. She even managed to put an army in the field, something the Empress couldn’t manage, because the queen did it in her husband’s name.

Empress Matilda settled on Lady of the English as the title she planned to use. It differentiated her from a queen in the accepted sense of being a king’s wife but avoided describing her as a king with all of the uncertainties her sex would bring to that label. Lady of the English harked back to Æthelflæd, the tenth-century Lady of the Mercians. The oldest daughter of Alfred the Great, she ruled the kingdom of Mercia from 911 to 918 and provided a template for the female exercise of power. The daughter of a great king, just as Matilda was, it offered a way for men to understand the exercise of royal authority by a female, but England bottled it at the last moment and Matilda was driven out of London on the eve of her coronation.

The cast of supporting characters in this dynastic drama is rich. As Queen Matilda was to King Stephen, so Robert, Earl of Gloucester was to his half-sister Empress Matilda. He was an illegitimate son of Henry I and provided the Empress with a mechanism to put armies on the field, though Robert frequently found himself fending off suggestions that he should be king himself. Henry, Bishop of Winchester was King Stephen’s brother, but was often found in the camps of his enemies. Was he betraying his brother to suit his own prospects, or was there much more to the apparent changes of side, keeping his brother’s cause alive from within his enemy’s court?

One story that leaps out from the catalogue of despair penned by William of Malmesbury is that of Robert Fitz Hubert. Described as a ‘cruel and savage man’, Robert was known to boast that he had once burned eighty monks alive inside their church and he threatened to do the same to William’s home at Malmesbury Abbey. Robert was apparently well known for torturing those he captured, and one of his favourite methods of inflicting misery was tie his victim up outside in the sun. He would then smear them with honey and stir up insects to bite and sting them. When Robert died, William saw it as divine justice for an evil man, as chroniclers were fond of doing. I read it and thought it’s the sort of thing we do to celebrities on reality shows these days.

The Anarchy is a fascinating period brimming with complex and captivating characters. One of the main questions I tried to address was just how anarchic it was. The Anglo-Saxon Chronicle famously lamented that for nineteen years, men said that Christ and His saints slept. I wanted to try and discover just how lawless and brutal those nineteen years really were, and what I found was surprising.

Pick up your copy of
Stephen and Matilda
Cousins of Anarchy

Matthew Lewis was born and grew up in the West Midlands. Having obtained a law degree, he currently lives in Shropshire with his wife and children. History and writing have always been a passion of Matthew's, with particular interest in the Wars of the Roses period. His first novel, Loyalty, was born of the joining of those passions.

Posted by Mary Anne Yarde at 05:00 No comments:

#BookReview — A Phoenix Rising (The House of the Red Duke, #1) by Vivienne Brereton #HistoricalFiction #Tudors