Author,Ian Nathaniel Cohen explains how he wrote non-historical sword fights into his fabulous book — The Brotherhood of the Black Flag #amwriting #HistoricalFiction @INCspotlight


When writing historical fiction, there's always a hazy line between accuracy and artistic license. As writers, our job is to tell a captivating story that can maintain a reader's interest, not show off how much research we've done. On the other hand, what we come up with has to be at least somewhat credible, especially to audiences familiar with the time period we're writing about. That means having to do a truckload of research to get all sorts of details right, not for its own sake, but to understand how the setting would most likely impact our characters in one way or another. (And, of course, to avoid the inevitable - and to be fair, justified - wrath of fact-checkers.)
My first novel, The Brotherhood of the Black Flag, is an adventure thriller set in the Golden Age of Piracy, an era that fortunately is easy to find information about. When doing my research, I not only scoured books, articles, and websites, but also fired off emails to academics, government officials, and re-enactment societies asking for all manner of information so I could depict the time period as accurately as possible and understand how it could possibly shape the plot and character arcs. I've been going through that same process for my next book, The Sherwood Caper, a heist thriller set in Medieval England – and yes, it’s about Robin Hood. I’ve been fact-checking the accuracy of the terminology I use, poring over maps to make sure I have my geography straight, that sort of thing - and that's just the non-spoilerish stuff.

However, there's one part of my writing where I willfully, deliberately, and unapologetically chuck strict historical accuracy out the window - sword fight choreography.

The job of every scene in a book is to paint a vivid picture for the reader, allowing them to visualize the proceedings like they're watching it on a screen. When I write sword fights, the picture I typically want to paint is two opponents engaging in a graceful, fast-paced clash of blades, like something from an Errol Flynn movie or The Princess Bride. There’s even a semi-official term for this theatrical kind of swordplay, according to TV Tropes – “Flynning.”

A real fight, of course, is nothing like this. They're a messy tangle of limbs and weapons, where the objective is to take down your opponent as quickly as possible by any means necessary, fair play be damned. If you want to read great examples of these kinds of fight scenes in historical fiction, Bernard Cornwell's Sharpe novels and Arturo Pérez-Reverte's Alatriste series are loaded with them.

As for real fencing, it's all about economy of movement so you can attack and defend as quickly and efficiently as possible. The moves in stage and screen combat, however, are flashy and exaggerated to look more exciting.

So why did I go this route? If I’m determined to be a stickler for accuracy in all other respects, why make an exception for how I stage my sword fights?
I have two main reasons for doing this. The first is a stylistic choice. I grew up on Hollywood swashbucklers, and both The Brotherhood of the Black Flag and The Sherwood Caper are intended, among other things, as homages to these movies. A key part of capturing the spirit of this genre is trying to replicate the feel of their fight scenes, even if it comes at the expense of the accuracy I aim for elsewhere in the story.

The other reason is simply that those are the kinds of fight scenes that, in part, inspired my writing. Film fights may be anachronistic and unrealistic, but in the context of certain kinds of stories, they're a lot more fun to watch. The movements are more fluid, the pacing is faster, and the choreography is more graceful. It's a thing of beauty to watch a fight like that, and I wanted to see as much of these as I could.

As a result, cinematic swordsmanship ended up becoming a gateway to a variety of fiction genres across all mediums, as well as multiple eras of world history that inspired the fiction, where I could see and read about as many sword fights as possible. All this inspired not only a fascination with fencing, which I took for six years, but also stage combat and fight choreography, which I've had a few lessons in - not to mention trying my hand at my own stories about sword-swinging heroes. Long story short, the Flynning style of screen fighting was what inspired me not only as a reader, but as a writer, so that's what I try and reproduce in my work.
That doesn't mean I don't do any research whatsoever when coming up with my fights. I still need to learn about the weapons being used and how they are best used, as well as how to depict proper and improper stance. (The protagonist of The Brotherhood of the Black Flag is a former fencing instructor, requiring him to not only demonstrate proper form and technique himself, but correct students as needed.)

Beyond that, characters using certain moves and techniques are textbook examples of "show, don't tell" when it comes to demonstrating their proficiency with a particular weapon or fighting style. As an example, for one of the duels in The Brotherhood of the Black Flag, there's a sword fight that originally ended with one character disarming another with a vaguely described move. More than one beta reader wanted to "see" what the actual move was. As the victor was armed with a schiavona, a cut-and-thrust sword with a distinctive fighting style, I consulted with a friend who's knowledgeable about that particular weapon. (In fact, it was thanks to him that I decided said character was even going to use one.) He told me about using the cage-like handguard of the schiavona's hilt to trap the opponent's blade and pull the sword out of their hand. It's a very difficult move that requires a great deal of expertise to pull off, and having a character use it demonstrates that expertise, instead of me having to say “this guy’s an expert.”

Also, even with this approach to how I stage my fights, I still have to follow the rules of "show, don't tell" in other ways. Readers don't want to see a detailed blow-by-blow account of a duel to the death, because they're boring to read - and frankly, boring to write. Instead, we want to know what's going on inside the combatant's heads. Are they afraid? Is rage clouding their judgment? Do they feel a kind of thrill at facing off against someone who can give them a good challenge? That's what readers want us writers to show them, and that's what I try and focus on.

Will I ever write more realistic fight scenes at any point? Yeah, probably, for a story that calls for it - something with a more dramatic flavor to it, rather than a lighthearted swashbuckling adventure story. But for now, rather than Capo Ferro, Thibault, and Agrippa, I'll look to Fred Cavens, Bob Anderson, and F. Braun McAsh for my sword fights.

The Brotherhood of the Black Flag
By Ian Nathaniel Cohen 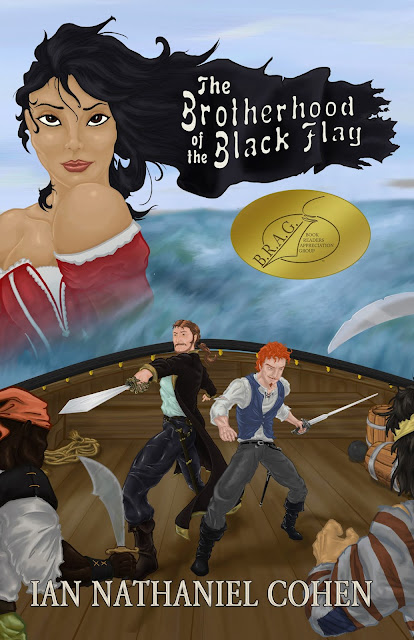 His once-promising naval career in tatters, Michael McNamara leaves the newly-United Kingdom behind in search of a new life. With no other skills but the sword, he joins forces with a pirate turned pirate hunter, determined to rid the Caribbean of the Brotherhood of the Black Flag once and for all.

Eager for a worthy cause to fight for, McNamara pits himself against treacherous seas and battle-hardened buccaneers... and uncovers an international conspiracy that threatens the lives of thousands.


"Cohen delivers a solid, compelling, and briskly paced story that blends adventure and romance within a rich historical setting."

Ian Nathaniel Cohen
Ian Nathaniel Cohen is a native of Miami, Florida, where he grew up immersing himself in swashbuckler literature and film. He graduated from the University of Central Florida in 2003 with a BA in Radio/Television Production and a Minor's Certificate in Applied Computer Science. He also received his MA in Asian Studies from Florida International University in 2006, where he teaches the course Asia Through Film as an adjunct lecturer. In 2010, his essay "Heroes & Villains of the East", analyzing the evolving depiction of the Japanese in Chinese and Hong Kong martial arts cinema, was published in FIU's Japan Studies Journal.