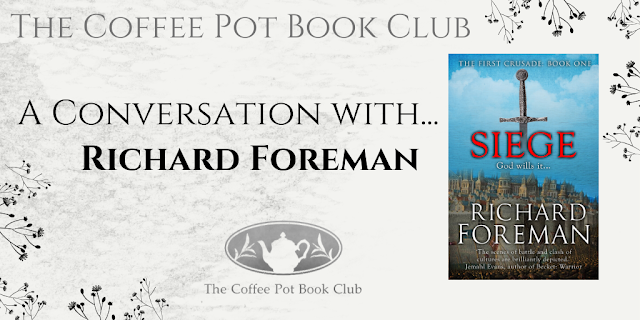 MA: I am so glad you could drop by for a chat today. Before we begin, could you please tell my readers a little about yourself. 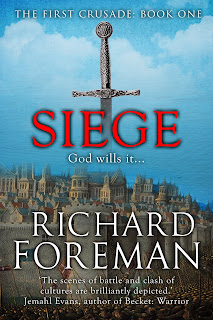 RF: My name is Richard Foreman. I’m a publicist turned author and publisher. During my days as a publicist I was fortunate enough to work with several historians and historical novelists – Simon Sebag Montefiore, Kate Williams and Tim Butcher - arranging articles, launch parties and book talks. My days are spent reading and writing. In regards to reading, I run Sharpe Books, one of the UK’s leading independent publishers. We publish both established and new authors – specialising in historical fiction and crime/thrillers. As well as reading submissions, I sometimes act as a judge on competition panels. In relation to my writing, I am the author of various bestselling novels, covering different eras and genres – including Augustus: Son of Rome, Raffles: The Complete Innings and Warsaw, set during WW2. My latest book is Siege, the opening instalment of a planned trilogy about the First Crusade. The novel covers an epochal moment in European and Middle Eastern history, blending fact with fiction, action with religion. I am always interested in hearing from people so do get in touch, whether you are a reader or author, should you have read one of my titles and wish to publish something similar.

MA: I thought we would keep the questions light-hearted today. If you could live anywhere in the world, where would it be?

RF: I live in London – and have done all my life. I’ve been able to travel a fair bit over the years, for business and pleasure. I couldn’t live in New York – but I I could Boston, in the US. As much as I write about Ancient Rome I prefer the other City of Seven Hills, Lisbon. I think I would still live in London, for the most part, given the choice. But I’m not averse to having holiday homes in the countryside and somewhere sunny, however, with a swimming pool. I just need a nearby bookshop, pub and cinema – and most importantly my dog would need to live with me.

MA: What would you consider to be your greatest strength?

RF: To know that I have plenty of weaknesses.

RF: Fine dining. I regularly arrange dinners with author friends, who know how to put an outfit and sentence together. The copious amounts of wine we drink help us laugh at each other and ourselves. We share ideas and contacts – and are duly supportive of people with new books out. Am equally happy at a Michelin Star restaurant or local curry house.

RF: Rudeness. Good manners cost nothing - but are priceless.

MA: Thank you so much for dropping by today.

If you would like to learn more about Richard's books then you know what to do... SCROLL DOWN! 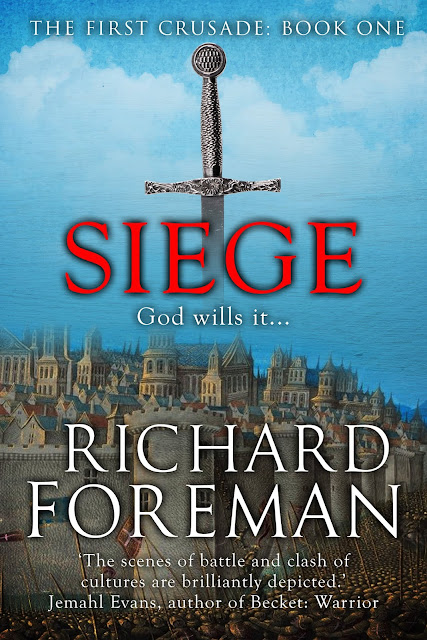 1098.
The crusader army still stands outside Antioch. Starving. Deserting.
An enemy force, led by Kerbogha of Mosul, is days away from relieving the walled city.
Bohemond of Taranto calls upon the English knight, Edward Kemp, to meet with an agent, who is willing to provide the Norman prince with access to Antioch.
But Bohemond is not alone in wishing to capture and lay claim to the prize. Edward must contend with enemies in his own camp.
Should the knight's mission fail, then so may the entire campaign.
Antioch must fall.
Recommended for fans of Bernard Cornwell, Michael Jecks and Conn Iggulden.

'The scenes of battle and clash of cultures are brilliantly depicted.' Jemahl Evans, author of Becket: Warrior

Siege is the first book in a new series, set during the First Crusade, by bestselling historical novelist Richard Foreman.

Pick up your copy of
Siege
Amazon UK • Amazon US

Richard Foreman is a bestselling historical novelist. He is the author of multiple series set in Ancient Rome, including Sword of Rome, Sword of Empire, Spies of Rome and the Augustus saga. He has also written books set in the medieval period, Band of Brothers, and WW2 – Warsaw and A Hero of Our Time. His books have regularly broken through into the top 100 of Amazon and have been widely praised. His new book is Siege, the first in a series of novels set during the First Crusade.

For many years Richard worked as a publicist and literary consultant for numerous bestselling authors, including Simon Sebag-Montefiore, Kate Williams and William Dalrymple. During his time as a publicist Richard founded the London History Festival. He has also served as a judge for the HWA Crowns.

Richard is the CEO of Sharpe Books, one of the leading UK independent publishers. Sharpe Books specialises in publishing crime/thrillers, historical fiction and history books. Authors on their list include Michael Jecks, Sarah Gristwood, Saul David and Peter Tonkin. As well as publishing established writers, Sharpe Books accepts submissions from new authors too. Please see sharpebooks.com should you wish to get in touch and see their submission requirements. 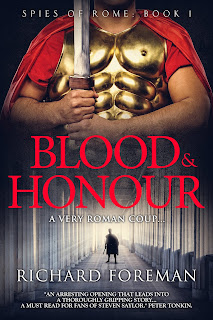 "A masterful and evocative depiction of a fledgling imperial Rome fraught with intrigue and at war with itself. The story and characters are as striking as the graffiti that adorns the violent city’s walls during Augustus' rise."
Steven Veerapen, author of The Abbey Close.
"An arresting opening that leads into a thoroughly gripping story. Impressive research and understanding of the period allows Richard Foreman to move so seamlessly and effectively from historical epic to historical detective thriller. A must read for fans of Steven Saylor."
Peter Tonkin, author of The Ides. 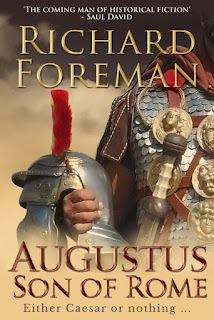 'Augustus: Son of Rome forges action and adventure with politics and philosophy. This superb story is drenched in both blood and wisdom - and puts Foreman on the map as the coming man of historical fiction’.
Saul David, Author of the Zulu Hart series. 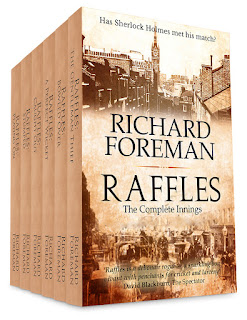 Band of Brothers:
The Complete Campaigns 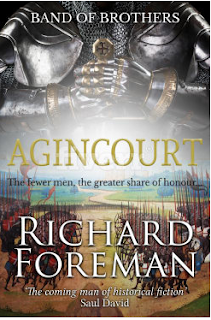 'Escapism at its best... A great read that tells much about the style of war and how the individuals fought.'
Michael Jecks.
'A rattling good yarn, requiring only the minimum of suspension of belief, and leaves one eagerly anticipating the next instalment of the adventures of the team as they accompany the King to Harfleur.'
Major Gordon Corrigan, author of A Great and Glorious Adventure: A Military History of the Hundred Years War. 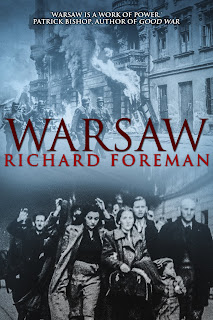 "Warsaw is a work of power. It has the authentic feeling that pulses from an important book. The meticulous research and psychological insights light up one of the most ghastly episodes in the history of man's inhumanity to man."
Patrick Bishop, author of Fighter Boys and A Good War.