#HistoricalFiction author, Liz Harris, is talking about the inspiration behind her fabulous novel - The Road Back #NewRelease @lizharrisauthor 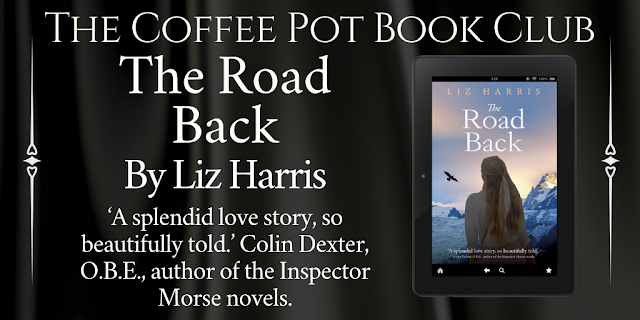 The Road Back
By Liz Harris 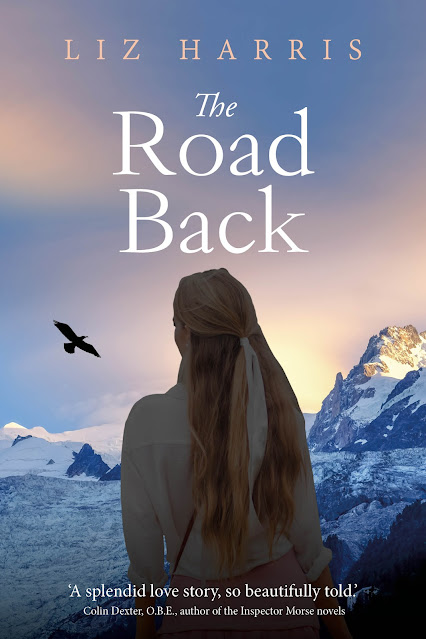 Book Title: THE ROAD BACK
Publication Date: 1st August 2022
Publisher:  Heywood Press
Page Length: 354 Pages
Genre:  Historical Fiction
‘A wonderful story of an illicit affair in Ladakh (a territory west of Tibet) in the 1950s. There is some terrific cultural detail in a splendid read.’ (The Bookseller, 26th May, 2012)
When Patricia accompanies her father, Major George Carstairs, on a trip to Ladakh, north of the Himalayas, in the early 1960s, she sees it as a chance to finally win his love. What she could never have foreseen is meeting Kalden - a local man destined by circumstances beyond his control to be a monk, but fated to be the love of her life.
Despite her father's fury, Patricia and Kalden are determined to stay together, but can their forbidden love survive?
A wonderful story about a passion that crosses cultures, a love that endures for a lifetime, and the hope that can only come from revisiting the past.
‘A splendid love story, so beautifully told.’ Colin Dexter, O.B.E., author of the Inspector Morse novels.

THE ROAD BACK
by Liz Harris
I should say first of all that this is the second edition of The Road Back, which was published for the first time in 2012. The original cover, however, is now a little dated, and it’s believed that a second edition, with a new cover, could attract a whole new readership who’d enjoy it.

The following isn’t a spoiler as you’ll deduce this from the blurb! The Road Back is the story of Patricia, brought up in London in the 1950s, and of Kalden, a few months older than Patricia, who was brought up in a small village in Ladakh, his destiny being to become a monk. Fated to meet, they fall in love, and are determined to stay together despite the obstacles they face.

I have my late uncle to thank for introducing me to Ladakh, a beautiful Indian province that lies to the north of the Himalayas and west of Tibet.

When my uncle was stationed with the army in North India in the 1940s, he managed to get one of the few authorised passes to visit Ladakh. Upon his return to England, he assembled his photos and notes into an album, which he gave to one of his daughters. That daughter now lives in Australia, and a few years ago, she phoned and asked if I’d help her to find a permanent home for the album as the green ink in which my uncle’s notes were written, was starting to fade.

The album is now in the Indian Room of the British Library on Euston Road. But before I handed it over to the Library, I read it from cover to cover, and I fell in love with Ladakh. I knew I had to set at least a part of a novel there, so I began to research the province in depth, and then I started writing.

The character of Patricia had long been in my head. She was born in the 1950s and brought up in Belsize Park, a part of London I know well. I saw her as a lonely child, living with parents who’d been torn apart by grief over a tragedy that had happened to the family in the past. She’d been waiting for her moment to emerge from my mind, and her time had come!

But all I knew about Kalden was that he’d been brought up in a small village in the Buddhist part of Ladakh, so I carried on with my research. And then one day, I read how the lack of rain had influenced the social structure of the family in a way that affected the fourth son. At that moment, I was overwhelmed by a huge surge of excitement - I had my story!

In writing the story, I followed my instinct. It was only after I’d finished the book and had started to send it to agents, that I was given reason to think about its structure.

At that time, the familiar linear structure, where one chapter followed another chronologically, was being challenged by a number of authors, who had started exploring different ways of telling their story. Some jumped backwards and forwards in time, for example, sometimes going back a few months or years, sometimes whole centuries.

However, I’d written my book in what was a fairly conservative way, alternating the first few chapters between Patricia and Kalden, each growing up in a very different environment from the other, engendering, I’d hoped, a sense of expectation on the part of the reader that the two would one day meet, which would bring some tension.

I heard back from an agent fairly soon, and was very excited when she told me that if I’d restructure the book, playing around with time rather than sticking to a chronological presentation, she would be interested in representing me. When I’d got over my initial excitement, I thought long and hard about that.
While I could see that moving backwards and forwards in time could work really well where there were, for example, long-hidden secrets to be revealed, or where the life of a modern character was paralleled with that of someone from centuries before, I wasn’t sure that such a structure would allow me to show clearly the character development of Patricia, a lonely girl raised by parents who were weighed down by grief, and of Kalden, who through the circumstances beyond his control, faced a future he would never have chosen.

But an agent’s advice couldn’t be ignored, and I decided that, although the novel had seemed to flow in the way I’d written it, I should play around with the way in which I’d presented my narrative.
Ignoring an inner voice that screamed, ‘Don’t do it’, I then started cutting and pasting the first few chapters, and bringing forward chapters from later in the novel. When I had finished, I sent copies of the original and the revised versions to three different friends. All three preferred the original.

I thanked the agent, but I didn’t change the book, and in its original form, it was later accepted for publication. 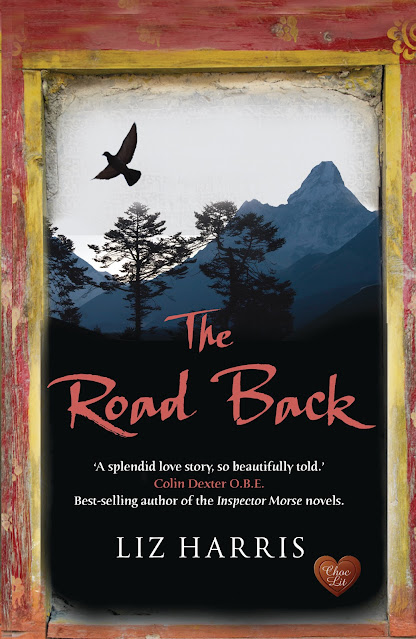 A few months before the first edition of the novel was published, I was extremely fortunate to meet Colin Dexter, O.B.E., the writer of the Inspector Morse novels, at a party given by the Oxford Writers’ Group. We bonded over a shared enthusiasm for The Archers, his knowledge of Belsize Park, where some of my novel is set, and a mutual liking for cryptic crosswords.

This resulted in Colin asking to be sent the manuscript for The Road Back. He’d greatly enjoyed it, he later told my publisher, and had been very moved by the story, and he volunteered to endorse the book. His words are on the cover of both editions. ‘A splendid love story, so beautifully told.’
Furthermore, he came to the launch of the novel, held in Waterstones Oxford, and gave a most amusing talk.

Looking back at the way in which the novel was received, at the awards it won and at the fabulous reviews it garnered, I’m very glad that I stuck to my guns when it came to the way I structured the novel.
Liz Harris
2nd June, 2022 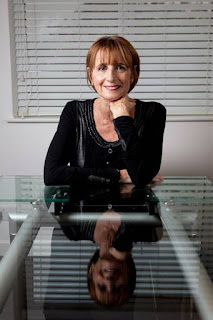 Born in London, Liz Harris graduated from university with a Law degree, and then moved to California, where she led a varied life, from waitressing on Sunset Strip to working as secretary to the CEO of a large Japanese trading company.
Six years later, she returned to London and completed a degree in English, after which she taught secondary school pupils, first in Berkshire, and then in Cheshire.
In addition to the fourteen novels she’s had published, she’s had several short stories in anthologies and magazines.
Liz has recently moved to Berkshire. An active member of the Romantic Novelists’ Association and the Historical Novel Society, her interests are travel, the theatre, reading and cryptic crosswords. To find out more about Liz, visit her website. You can also find Liz on the following social media platforms:
Twitter, Facebook, and Instagram.