"We sell any monk..." ~ the appeal of Horrible Histories

“History can be horrible.”
Horrible Histories

I'm sticking with "teaching our children history" theme this week, and I wanted to take a look at Horrible Histories by Terry Deary ~ you may have come across his work??! The Horrible Histories is a series of books looking at the…

…history, that is aimed at children. They are history books in cartoon form. The first Horrible History was published in 1993, can you believe it. They have been with us for over 20 years!

Deary is a very opinionated author. He is very vocal on the state of education in Britain, and he is also rather critical of historians. This is what he has to say about the latter…


"…(Historian’s)…are nearly as seedy and devious as politicians..."

Deary started life as a drama teacher – well not literally, but you know what I mean. He was a Drama teacher, not a History teacher. But, Deary has, and there is no other way to say this, succeeded where others have failed. He has managed to engage children into loving history. He has made a career out of doing this.

The first thing you notice about his books are the titles. Here's a few examples… 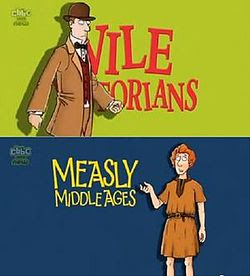 There is nothing as awesome as alliteration, is there?!

My children love Horrible Histories. They really really love it. I have lost count how many books we have, but it is definitely in double figures. I think Deary wrote somewhere in the region of 40 Horrible History books.

In 2009 the BBC picked up the books and made them into a very popular children’s program, which is still being aired today ~ We do have all the DVDs! I have taken my children to see the live shows several times. For the last couple of years, Horrible Histories have been guests at Warwick Castle for the summer holidays, and as we try to go to Warwick Castle every year because it truly is amazing ~ and if you haven't been you really should ~ we get to interact with the Horrible Histories actors. They are not only entertaining but they let children experience a Victorian School, or a Viking Camp and of course they let the children do lots of vile things!


Horrible Histories, however, has come under fire… The English journalist, Simon Hoggart, has this to say about the television show..

"…where the books make a rudimentary attempt to teach history as a series of interconnected events, the television show is basically gags, chiefly about defecation, gluttony, murder and torture…”


“…Getting children interested in the past isn't necessarily easy, and Horrible Histories does it extremely effectively—and those who come to history because it's fun seem far more likely to stay with it in the long run…"


"…One step above Blackadder,”

But hey, Baldrick had a cunning plan and maybe Deary has too.

Snow then goes on to say…


“…it plays to stereotypes, but it's fantastic as entry-level history…”

I was talking in a past blog about how important it is to make teaching history enjoyable, and Horrible Histories does this through songs and dance. Of course, this does have disadvantages. Check out this short clip.

I had to cope with some very strange looks while walking around the supermarket with my youngest, who had decided to sing the Horrible History song ~ "We Sell Any Monk," at the top of his voice ~ he would have made a good Viking.

For children, I think the Horrible Histories series is great, and if it gets them interested in history then surely that is a bonus?!
Posted by Mary Anne Yarde at 08:00

Email ThisBlogThis!Share to TwitterShare to FacebookShare to Pinterest
Labels: #history

The French Orphan by Michael Stolle