#bookreview ~ Worth Fighting For #histfic

It was my very great pleasure to receive an ARC copy of
Mary-Anne O'Connor's latest book. 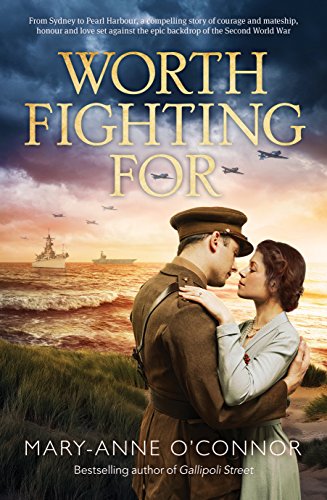 From Darwin to Pearl Harbour, Sydney to Papua New Guinea, a compelling story of courage, honour and a great love set against the epic backdrop of the Second World War.


Eighteen-year-old Junie Wallace is a smart girl and, with her two brothers away at war and her third brother just killed in action, she knows there is only one way to save the family farm for her grieving parents. Unfortunately, that solution involves marrying the unscrupulous Ernest, and breaking the heart of the young drover she loves, Michael.

But the war is looming ever closer, and when Pearl Harbour brings the threat of Japanese aggression to Australian shores, the fates of many becomes inextricably interwoven.

From the explosive battles of the Pacific campaign to the desperate fighting in the Papuan New Guinea rainforest; the dancehall gaiety of Sydney’s Trocadero to the terror of the Darwin bombings, this epic family saga brings home the importance of mateship and of fighting for what you believe in, even when impossible odds seem stacked against you, even when all seems lost…

Worth Fighting For is a resounding testament to the enduring force of love: a reminder of what can be achieved if you draw on your reserves of courage and listen to the truth in your heart.

Links to Purchase
Amazon US
Amazon UK
What did I think of the book?

Junie Wallace is engaged to be married. She is to marry the man who has rescued her family from financial disaster. This should be a happy occasion. A win, win situation for everyone. Alas her heart belongs to another, a young drover called Michael. Michael has stolen her heart, but will she ever be free to give him hers?

Worth Fighting For is an evocative, emotional read about the courage of one young woman, who puts her family above her own happiness.

Set in the backdrop of WW2, Worth Fighting For is rich in historical detail. From the horrors of Pearl Harbor to the fierce fighting in Papua New Guinea's rainforest, this book describes the horrors of war in explicit detail. It was very real in the telling and at times, I found myself reaching for the Kleenex as characters I came to care about faced life and death situations.

Junie is a well-rounded and believable character, trapped in an impossible situation. I felt her heartache and her despair, and I rejoiced with her triumphs.

O'Conner does not shy away from the treatment of the indigenous tribes in Australia at the time, and I thought she approached this delicate subject with compassion and humanity.

Worth Fighting For is a well-researched and compelling read. I read the book in one sitting. I simply could not put it down. With beautiful prose and an enthralling storyline, I have no hesitation in recommending this book.

I Highly Recommend.
Posted by Mary Anne Yarde at 08:00