“…Sir Walter Raleigh and Mr. Ruthven being prisoners in the Tower, and addicting themselves to chemistry, she (Lucy St.John Apsley) suffered them to make their rare experiments at her cost, partly to comfort and divert the poor prisoners, and partly to gain the knowledge of their experiments, and the medicines to help such poor people as were not able to seek physicians. By these means she acquired a great deal of skill, which was very profitable to many all her life. She was not only to these, but to all the other prisoners that came into the Tower, as a mother. All the time she dwelt in the Tower, if any were sick she made them broths and restoratives with her own hands, visited and took care of them, and provided them all necessaries; if any were afflicted she comforted them, so that they felt not the inconvenience of a prison who were in that place.”
Lucy Hutchinson
Biographical Fragment
Memoirs of the Life of Colonel Hutchinson

When I was back working on research at the Tower of London in May, I was delighted to hear from one of the Beefeaters that there is a restoration underway of the Bloody Tower, and the medicinal garden that bordered it. Built over by the Victorians, the garden appears on old maps of the Tower as a thriving section of cultivated land stretching from the Queen’s House (home of the Governor) all the way to the Bloody Tower. It was vital component of the Tower of London, and one that my ancestress, the Lieutenant’s wife Lucy St.John Apsley, made good use of during her time there in the early seventeenth century.


Portion of Hayward and Gascoyne’s survey of the Tower of London, 1597, showing the Physick Garden (lower left)

From the windows of his prison in the Bloody Tower, Sir Walter Raleigh would have looked out over the thriving physick garden, complete with an orchard and a large hen house. Tended by Lucy, the herbs and curatives grown within the garden served as the basis for the medicines she made to care for the prisoners of the Tower of London. A noted botanist himself, Raleigh occupied his time in prison with his own scientific experiments. However, his work was not limited to restoratives---he was also an eager alchemist, and so his search for the Philosopher’s Stone consumed much of his research. So fascinated by this was Lucy, that she gave Raleigh her hen house within which to conduct his experiments, and I have no doubt that she spent time at his side as he worked away.


The extract from the pages of Lucy Hutchinson’s memoirs featuring the story of her mother’s life in the Tower immediately set me on a hunt for more information about Lucy St.John and the world she inhabited. Writing about her mother, Lucy Hutchinson chose to focus on the attributes of medicinal skills and recipes she used to tend to the prisoners within the Tower. This paragraph inspired the writing of my debut best-selling novel, The Lady of the Tower, and sent me on a glorious journey into the methods and curatives that were an everyday part of Lucy’s life.
These seventeenth century remedies were precious commodities exchanged by family and friends alike. And since Lucy St.John would have known her nephew’s wife, Lady Johanna St.John, it was no stretch of the “probable” for me to think that Lucy would be familiar with the recipes within Johanna’s collection, or may even have contributed some of her own. 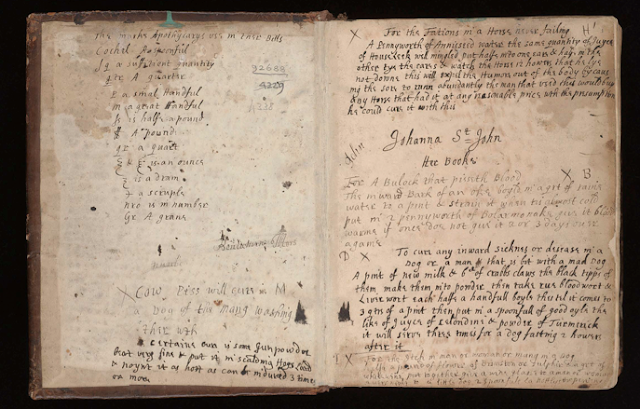 
Already acquainted with Lady Johanna and the Lydiard estate through my own family records, I delved into her recipe book, which is archived at The Wellcome Library in London. The beautifully preserved leather-bound book contains recipes designed to help a knowledgeable and educated woman manage the health of her family, servants and livestock. Relying on a great deal of herbal wisdom, as well as the more exotic ingredients found in the London apothecaries, Lady Johanna’s book is a testament to the importance placed on remedies, in an age where so little was still known about the body and its infirmities. When I decided to use extracts from the book to illustrate Lucy’s learnings in The Lady of the Tower, I was fascinated to discover that many of the herbal properties and therapies Lady Johanna recommend are still used in pharmaceutical production today.


One particular recipe of interest is that for “Gilbert’s Water.”
“It is bad for nothing it cures wind and the colick restoreth decayed nature good for a consumption expels poison & all infection from the Hart helps digestion purifies the blood gives motion to the spirits drives out the smallpox for the grippes in young children weomen in labor bringeth the Afterbirth stops floods for sounding and faintings”
Lady Johanna devotes two pages of her precious recipe book to Adrian Gilbert’s Cordial Water, which was perhaps indicative of the importance she placed on its curative powers. The recipe itself was complex, requiring Dragons Burnett leaves (probably the simple dragon’s mace, a common weed), and then moving on to a page full of rarer ingredients, such as “Crab’s eyes taken in the full of the moon.”  Promoting the contemporary belief man shared the virtue of the plants digested, Mr Gilbert was taking no chances with his curative, empowering the recipient with dragon strength to fight his condition.
But there is more to the story. Adrian Gilbert was a well-known alchemist and amateur scientist, and half-brother to Sir Walter Raleigh, himself a distinguished botanist. Adrian’s brother, Humphrey Gilbert, was under the patronage of Robert Cecil and Robert Dudley who maintained an alchemical laboratory in Limehouse. Back to the garden of the Bloody Tower, where Lucy and Raleigh were creating their recipes and experiments. I don’t believe it is that much of a stretch to think that Sir Walter and his half-brother Adrian Gilbert traded medicinal recipes, nor that Lucy St.John would keep a record of any precious curatives that came into her possession. For her to then pass these on to her niece, who shared her passion for botany, gardens and curatives, would be a natural occurrence.
Writing credible historical fiction is always about linking the probables, and in connecting Lucy St.John with Lady Johanna and using their common interest in medicinal curatives, I brought truth to my narrative. What is undisputed is these interesting women’s common desire to protect their families and charges from the dangers of seventeenth century life, and a shared concern for health, hope for treatment, and the rewards of recovery.

The Lydiard Chronicles
Courtiers. Cavaliers. Puritans. Family.
Being the true account of our lives… 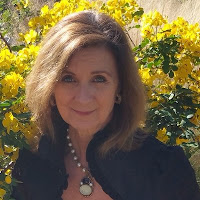 Elizabeth St.John was brought up in England and lives in California. To inform her writing, she has tracked down family papers and residences from Nottingham Castle, Lydiard Park, and Castle Fonmon to the Tower of London. Although the family sold a few castles and country homes along the way (it's hard to keep a good castle going these days), Elizabeth's family still occupy them - in the form of portraits, memoirs, and gardens that carry their imprint. And the occasional ghost.
Elizabeth’s debut novel, The Lady of the Tower, has been an Amazon best seller since its release in 2016, and has won numerous awards for historical fiction. By Love Divided, the second in The Lydiard Chronicles series, follows the fortunes of the St.John family during the English Civil War, and was featured a the 2018 Swindon Festival of Literature. Elizabeth’s currently working on the next in the series, telling of the lives of the St.John women after the Civil War and into the Restoration.
Elizabeth loves to hear from readers, you can find her: Website Facebook Twitter
Posted by Mary Anne Yarde at 07:00