Join Historical Fiction author, Tim Walker, as he takes a look at Life and Death in the Early Dark Ages #History #DarkAges @timwalker1666

Life and Death in Early Dark Ages Britain
By Tim Walker
My fascination for this relatively unknown period in British history wedged between the end of Roman occupation and the establishment of the Anglo-Saxon kingdoms - the early Dark Ages - started on a summer's day in 2015. I was standing in a field surrounded by the jagged stubble of a stone wall, pillaged over the years, but now partly restored and proudly maintained by English Heritage. The Romans called it Calleva Atrebatum, literally 'the wooded place of the Atrebates', and by naming it for the local tribe, showed a desire to placate their new subjects.

It was the site of a Roman town that had been completely abandoned within a hundred-or-so years following the Roman evacuation around the year 410 AD, now under investigation by a team of archaeologists from Reading University. This mysterious desertion raises the question, ‘why was it abandoned? The earliest surviving source from this period, Gildas (‘On the Ruin of Britain’ c. 540AD) gives us a clue. Gildas speaks of a time of great suffering and persecution of the people from invaders, forcing them to flee settlements and coastal areas prone to being raided for the old hill forts that archaeologists confirm were re-occupied in this period. 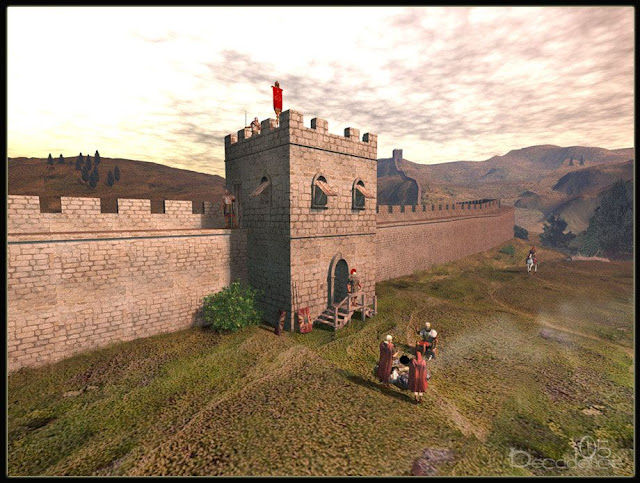 I began researching and writing a novella, Abandoned, that became the starting point of a series that has led me into the Arthurian legend, and to my own tentative telling of the King Arthur story based on literary and historical research. A Light in the Dark Ages reflects my fascination with this little-known period in our fractured history - an intriguing stage on a continuum of passive and violent invasions that have shaped the British nation.
Nennius (The History of the Britons c. 830) mentions Arthur and gives us a list of his twelve battles. He tells us that the Kingdom of Kent was ruled by a Saxon king, Octha, the son of Hengist, and Arthur rallied the combined forces of the Kings of the Britons to oppose him. Nennius refers to Arthur not as a king, but as ‘Dux Bellorum’ – Duke, or leader, of Battles. He doesn’t say that Arthur was not one of the kings of the Britons, merely that he was their military commander, and perhaps the first amongst equals.
Other mentions for Arthur occur in The Mabinogion, a collection of early Welsh folk tales that locates King Arthur at the former Roman Legion town of Isca Augusta, now called Caerleon, in South Wales. Arthur and other Briton leaders had plenty on their minds with tribes from Scotland raiding the north, the Irish raiding and occupying parts of the west, Germanic and Danish tribes - the Angles, Saxons and Jutes, raiding and colonising the east and south, and ongoing struggles for supremacy with rival tribal chiefs.
In my storytelling I have adopted the lineage of high kings of Britain (ruling over regional tribal kings and chiefs) proposed by the much-discredited Geoffrey of Monmouth in his epic work, The History of the Kings of Britain c. 1136. The elements of his work that are based on historical research and a claimed ‘lost book in a local tongue’, have been undermined in the eyes of historians by his habit of supplementing fact with legend, mythology or fiction. This is far from conclusive, although Vortigern, Ambrosius Aurelianus and Arthur get mentions in other historical sources to add a tantalising element of the possible to Geoffrey’s timeline of kings:
Constantine                      c. 411 – 420
Vortigern                          c. 420 – 440
Ambrosius Aurelianus     c. 440 – 470
Uther Pendragon              c. 470 – 485
Arthur                              c. 485 – 530

What really happened in Britain after the end of Roman occupation around the year 410 AD? Scant evidence remains, although archaeological excavations still uncover artefacts that give a glimpse of habitat, lifestyle and death ritual. The lack of evidence of battle sites that can be dated to the fifth and sixth centuries has been seized upon by some revisionist historians to suggest that the Anglo-Saxon colonisation was a relatively peaceful affair. This seems unlikely to me, and until firmer evidence is forthcoming there will be much speculation and plenty of imagined offerings from historical fiction authors.

A Light in the Dark Ages 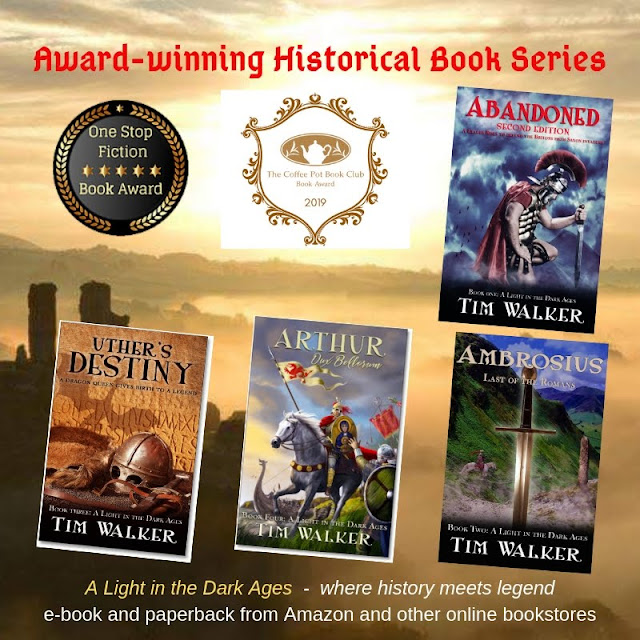 
A Light in the Dark Ages series
Amazon UK • Amazon US 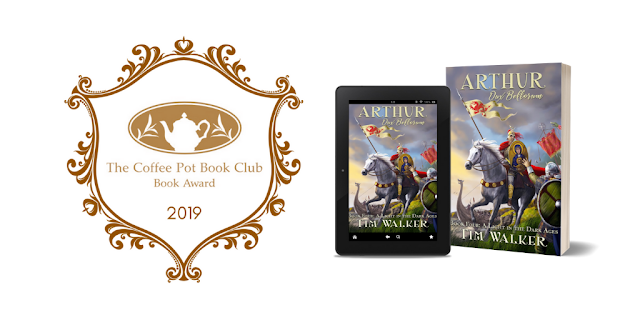 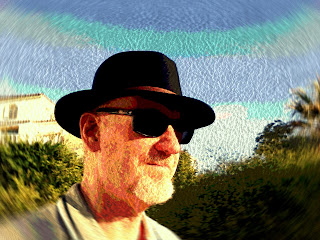 Tim Walker is an independent author based in the UK.
His latest book is 'Arthur, Dux Bellorum', a re-imagining of the King Arthur story, published in March 2019. Book four in his historical series, 'A Light in the Dark Ages', it has won two book awards in April 2019 - One Stop Fiction Book of the Month and the Coffee Pot Book Club Book Award. He plans to write a second Arthur book for 2020 publication.
Book one is 'Abandoned' (second edition 2018), followed by 'Ambrosius: Last of the Romans' (2017), and book three is 'Uther's Destiny' (2018). Series book covers are designed by Canadian graphic artist, Cathy Walker. The aim of A Light in the Dark Ages book series is to connect the end of Roman Britain to elements of the Arthurian legend, through researched history, presenting an imagined/alternative history of Britain in the early Dark Ages.
Tim lives near Windsor - close to the River Thames - the inspiration for his first book of short stories, 'Thames Valley Tales' (2015). In September 2017 he published a second book of short stories, 'Postcards from London'. These stories draw on the local history and current affairs of these places where the author has lived and worked.
His first novel was a political thriller, 'Devil Gate Dawn', that received pre-publication exposure on the Kindle Scout programme in March/April 2016. It found a wide readership due to its unnerving predictions of a post-Brexit Britain beset by political turmoil under King Charles III's rule and buckling under attacks from terrorist groups - and a dystopian portrayal of life in Trump America.
In early 2017 he published his first children's book, co-authored with his daughter, Cathy - 'The Adventures of Charly Holmes'. Another adventure story was published in 2018 - 'Charly & The Superheroes'. Rumour has it that a third adventure will be coming out later in 2019.
Connect with Tim: Website • Newsletter sign-up • Amazon • Facebook • Twitter.