Read an excerpt from The Steel Rose by Nancy Northcott @NancyNorthcott 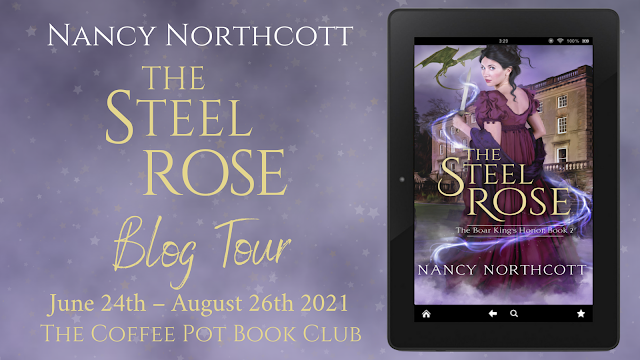 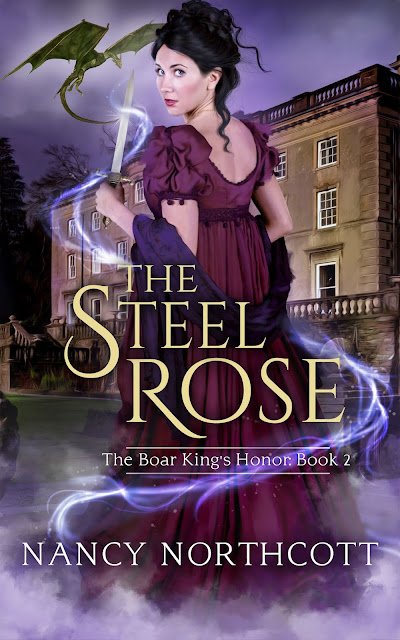 Publication Date: April 29, 2021
Publisher: Falstaff Books
Page Length: 370 Pages
Genre: Historical Fantasy/Romantic Fantasy
Amelia Mainwaring, a magically Gifted seer, is desperate to rescue the souls of her dead father and brother, who are trapped in a shadowy, wraith-filled land between life and death as the latest victims of their family curse. Lifting the curse requires clearing the name of King Richard III, who was wrongly accused of his nephews’ murder because of a mistake made by Amelia’s ancestor.
In London to seek help from a wizard scholar, Julian Winfield, Amelia has disturbing visions that warn of Napoleon Bonaparte’s escape from Elba and renewed war in Europe. A magical artifact fuels growing French support for Bonaparte. Can Amelia and Julian recover the artifact and deprive him of its power in time to avert the coming battles?
Their quest takes them from the crowded ballrooms of the London Season to the bloody field of Waterloo, demanding all of their courage, guile, and magical skill. Can they recover the artifact and stop Bonaparte? Or will all their hopes, along with Amanda’s father and brother, be doomed as a battle-weary Europe is once again engulfed in the flames of war?
The Steel Rose is the second book in the time-traveling, history-spanning fantasy series The Boar King’s Honor, from Nancy Northcott (Outcast Station, The Herald of Day).

This novel is available to read with #KindleUnlimited subscription.
Amazon 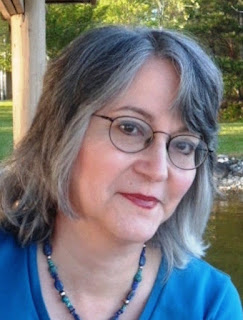 Nancy Northcott’s childhood ambition was to grow up and become Wonder Woman. Around fourth grade, she realized it was too late to acquire Amazon genes, but she still loved comic books, science fiction, fantasy, history, and romance. She combines the emotion and high stakes, and sometimes the magic, she loves in the books she writes.
She has written freelance articles and taught at the college level. Her most popular course was on science fiction, fantasy, and society.  She has also given presentations on the Wars of the Roses and Richard III to university classes studying Shakespeare’s play about Richard III. Reviewers have described her books as melding fantasy, romance, and suspense. Library Journal gave her debut novel, Renegade, a starred review, calling it “genre fiction at its best.”
In addition to the historical fantasy Boar King’s Honor trilogy, Nancy writes the Light Mage Wars paranormal romances, the Arachnid Files romantic suspense novellas, and the Lethal Webs romantic spy adventures. With Jeanne Adams, she cowrites the Outcast Station science fiction mysteries.
Married since 1987, Nancy and her husband have one son, a bossy dog, and a house full of books. 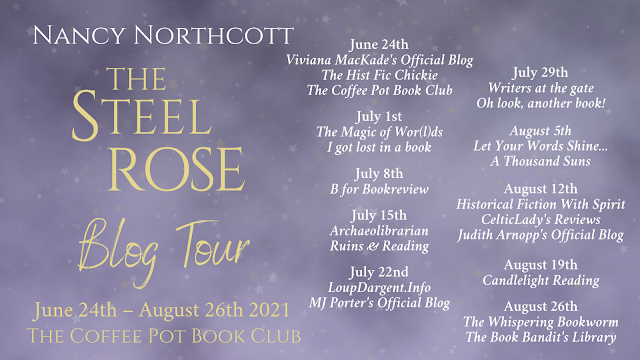