Mask of Duplicity
(The Jacobite Chronicles, Book 1)
By Julia Brannan 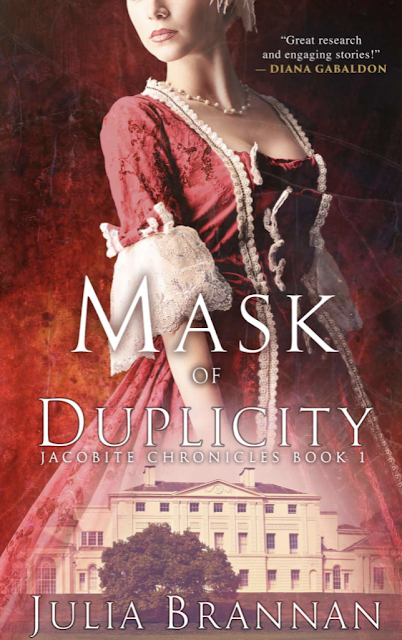 Publication Date: 8th June 2015
Page Length: 331 Pages
Genre: Historical Romance
Following the death of their father, Beth’s brother Richard returns from the army to claim his share of the family estate. However, Beth’s hopes of a quiet life are dashed when Richard, dissatisfied with his meagre inheritance and desperate for promotion, decides to force her into a marriage for his military gain. And he will stop at nothing to get his way.
Beth is coerced into a reconciliation with her noble cousins in order to marry well and escape her brutal brother. She is then thrown into the glittering social whirl of Georgian high society and struggles to conform. The effeminate but witty socialite Sir Anthony Peters offers to ease her passage into society and she is soon besieged by suitors eager to get their hands on her considerable dowry.
Beth, however, wants love and passion for herself, and to break free from the artificial life she is growing to hate. She finds herself plunged into a world where nothing is as it seems and everyone hides behind a mask. Can she trust the people professing to care for her?
The first in the series about the fascinating lives of beautiful Beth Cunningham, her family and friends during the tempestuous days leading up to the Jacobite Rebellion of 1745, which attempted to overthrow the Hanoverian King George II and restore the Stuarts to the British throne.
Join the rebellion of one woman and her fight for survival in...
The Jacobite Chronicles. 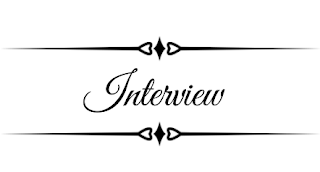 Mary Anne: Congratulations on the success of The Jacobite Chronicles. Could you tell us a little about the protagonist of the series, Beth Cunningham? And what was the inspiration behind her character? 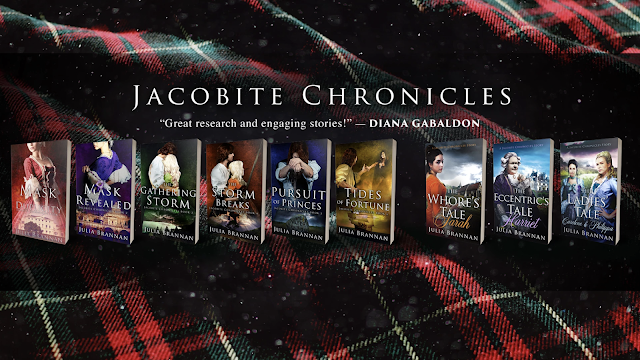 Julia Brannan: Thank you. I’m really lucky to be able to make a living by writing, which is my passion! When creating Beth Cunningham, the main female protagonist, I wanted a woman who had aristocratic connections and who had lived a reasonably sheltered but not a privileged life. I also wanted her to have Scottish connections.
Because of this I decided to have her aristocratic Hanoverian father marry twice, his second marriage being to a penniless Jacobite Highlander, which resulted in him being ostracised from his family. This gave Beth political knowledge, strong views and the confidence to express them (as did many women in that time), and allows her to straddle both the worlds I deal with in the series.
Beth wasn’t inspired by any individual, historical or otherwise, although my friends say there is a good deal of myself in her! I wanted a protagonist who is of her own time, but with whom 21st century readers can relate.
Mary Anne: When researching this era, did you come upon any unexpected surprises?
Julia Brannan: I knew very little about this era before I started researching. Most fiction seems to skip the period between the death of King Charles II in 1685 and the Regency, (with a few notable exceptions, none of which I’d read), so when I started looking into the early to mid-eighteenth century whilst trying to solve a family history mystery, I was amazed by how rich and vibrant a period it was. It literally has everything a writer of historical fiction could wish for: political upheaval, intellectual advances, religious and class tension, war, glamour and squalor. Possibly the biggest surprise for me was how brutal a period it was, in part because the fashions of the early to mid-eighteenth century appear ridiculous to modern eyes, and many of the portraits (of men in particular), with their colourful clothing, wigs and cosmetics seem to indicate effeminacy, gentleness or even weakness, whereas the absolute opposite was actually the case. This revelation definitely inspired me to invent Sir Anthony Peters, my male protagonist.
Mary Anne: Why do you think this period in history is still really popular with readers?
Julia Brannan: As I mentioned above, I don’t think this period has been popular with readers, in the main because it isn’t very popular with authors. I think the phenomenal success of Diana Gabaldon’s Outlander series, especially since it became a TV series, may well have changed that, as readers realise (as I did while researching) what a rich historical era it is. I actually didn’t know about Diana’s books until readers kept asking me if I’d read them or seen the series! I love writing about such a relatively unexplored era!
Mary Anne: What do you think is the most challenging aspect of writing Historical Fiction during this era?
Julia Brannan: The most challenging aspect of writing about this era is selecting which historical events to focus on, because there really is so much material! Equal to that is the challenge of keeping my characters as true as possible to their time period, whilst not alienating modern readers from them. This is particularly true of male characters. But there are unique difficulties when writing about pre-Victorian females, as many people think that women were completely subjugated at all times before the twentieth century, when in fact this was not the case. It’s true they had few rights in law, and their primary role was to marry and procreate, but many women were educated or at least literate, outspoken, ran businesses, and were far more involved in general society than their more repressed Victorian sisters were. Needless to say, I’ve been criticised for making my women too ‘modern’ in their outlook, when in actual fact they’re not!
Mary Anne: If you could tell your younger writing self anything, what would it be?
Julia Brannan: There are two things I would definitely tell my younger writing self if I could – and by extension, any younger writers who have the same experiences as I did.
The first would be to ignore anyone (in my case the school careers adviser) who tells you that you’re ridiculous for wanting to be a writer. I think it’s fair to say that it’s a good idea to look at alternative careers as well, because earning a living as a full-time author is very difficult, and you need to be obsessed, dedicated and incredibly hard-working to have a chance of success. Even if you are all those things, it’s very likely that for a number of years you’ll have to make your living in another way, and scribble away in your spare time. But ignore anyone who says it’s absolutely impossible, or who mocks you for your aspirations.
The second is not to be put off by agent or publisher rejections. In my case, having written a very average novel in my teens, (written by hand and then painstakingly typed up in my summer holiday) it was rejected by a publisher, after which I threw a teenage hissy fit and declared my heart was broken and I would never be a writer. The novel was thrown in a drawer along with my dreams and forgotten, until I moved house many years and many jobs later, whereupon I found it, and on reading the publisher’s rejection letter with the wisdom of age, realised that it was incredibly encouraging. In fact they’d said that although my current novel showed a lack of experience both of life and writing, they’d be very interested to read future submissions of mine. To say I kicked myself around the room on re-reading this is an understatement… 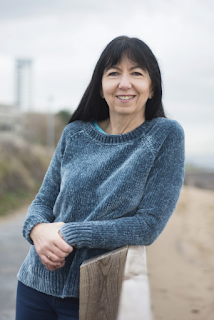 Julia has been a voracious reader since childhood, using books to escape the miseries of a turbulent adolescence. After leaving university with a degree in English Language and Literature, she spent her twenties trying to be a sensible and responsible person, even going so far as to work for the Civil Service. The book escape came in very useful there too.
And then she gave up trying to conform and resolved to spend the rest of her life living as she wanted to, not as others would like her to. She has since had a variety of jobs, including telesales, teaching and gilding. In her spare time she is still a voracious reader, and enjoys keeping fit and travelling the world. Life hasn’t always been good, but it has rarely been boring.
In 2014 she decided that rather than just escape into other people’s books, she would actually like to create some of her own, in the hopes that people would enjoy reading them as much as she does writing them. It seems that they do, and she has now published several historical novels, and has also branched out into contemporary fiction too.
In 2019 she moved to live in rural Scotland with her cat Constantine, and loves living there, writing novels about the turbulent history of this beautiful country.
Connect with Julia: 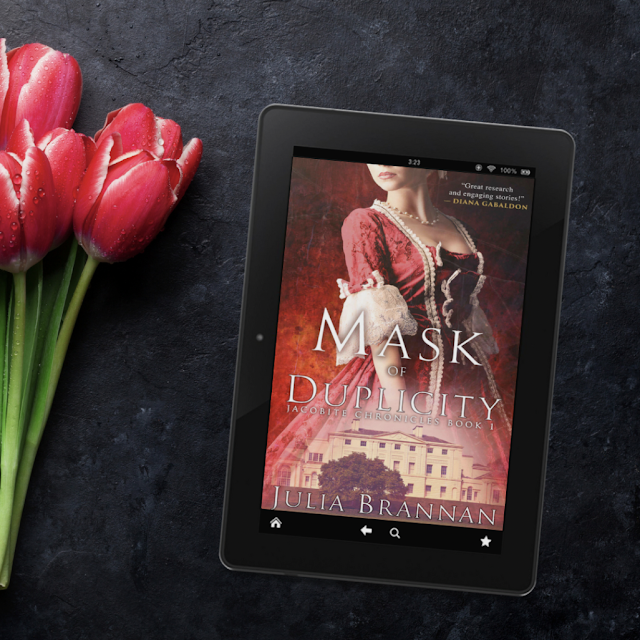