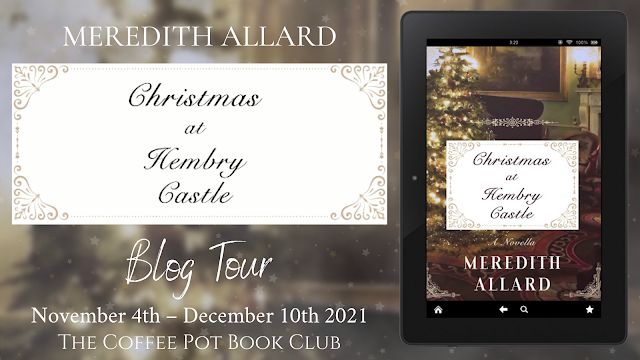 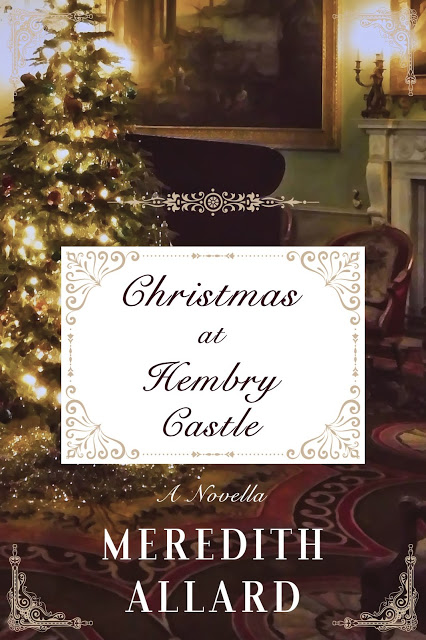 Publication Date: 1st December 2020
Publisher: Copperfield Press
Page Length: 120 Pages
Genre: Historical Fiction/Victorian/Holiday
You are cordially invited to Christmas at Hembry Castle.
An unlikely earl struggles with his new place. A young couple’s love is tested. What is a meddling ghost to do?
In the tradition of A Christmas Carol, travel back to Victorian England and enjoy a lighthearted, festive holiday celebration.

Preparing for Christmas at Hembry Castle was a months-long affair. In September, Mrs. Graham, in consultation with the Countess of Staton and Lady Daphne, created her festive menus for breakfasts, luncheons, teas, dinners, and other celebrations from the first of December through Twelfth Night. She gathered ingredients in October and cooked and baked in November and December. Mrs. Ellis once asked Mrs. Graham how many pies she baked in a Christmas season, to which Mrs. Graham replied, “Somewhere between one hundred and ten thousand million.” Everyone always clamored for pies—mince pies, pork pies, turkey pies, pigeon pies, raised game pies, squab pies, steak and kidney pies, roast chicken pies, beef and potato pies, cheese and onion pies, and more mince pies. Mrs. Graham baked enough for the family and their many guests, enough for the villagers, enough for the farmers, enough for all England it seemed. Pies were all Mrs. Graham knew these days.
Sometimes, when Mrs. Ellis was taking tea in her sitting room, bent over the house accounts, her head popped up at the call of “Pies!” ringing from the kitchen. “Pies! Pies! Pies!” When Mrs. Ellis went to investigate, she saw Mrs. Graham and her maids elbow-deep in pastry, nutmeg, sugar, milk, eggs, suet, beef, apples, currants, raisins, brandy, and lemons. Indeed, mince pies were most popular this time of year. Mrs. Ellis always tip-toed away, leaving them to their “Pies!”
A constant stream of visitors flowed through the ancient halls of Hembry Castle throughout the month of December, and Hembry Castle would not be caught out before its guests. The maids dusted every volume in the library, buffed every droplet of the chandeliers until they gleamed, turned on the gaslights, and set glowing candles on the shelves. The footmen polished the silver and laid bowls of pomegranates, oranges, and spices on every flat surface, the scents of cinnamon and citrus filling the air. His lordship and Lady Daphne busied themselves writing Christmas cards, and Lady Daphne made a decoupage display with the colorful cards they received. Mr. Ellis was only slightly embarrassed by the arrival of a box of Christmas crackers ordered by Lady Daphne, who had been so charmed by the bon-bons and poems inside the tissue paper at her first Christmas at Hembry Castle. The butler set his wire-rimmed spectacles back on his nose, coughed, winked, then finally accepted the box from the impatient delivery boy.
Feathered trees lined the shelves, proudly displaying their cotton stars and glass ornaments. The warm spicy scents of the season were soon overpowered by the fresh greens dragged inside by the gardeners, and suddenly the midwinter wasn’t quite so bleak. Holly with its star-shaped leaves and red berries was made into wreaths for doors both inside and out. Mistletoe hung discreetly from the Roman arches, leaving giggling maids and grinning footmen scurrying when footsteps headed their way. Pine boughs lined the banisters and framed every door. Sometimes, after their guests had gone for the day, after they partook of Mrs. Graham’s scrumptious delights, as they sat before a hot fire with a good book and a cup of tea, both Frederick and Daphne found some respite from their worries. What they would not admit, even to themselves, was that Christmas at Hembry Castle in the Year of Our Lord 1871 was all a performance with Lord Staton and Lady Daphne primed for the stage. The grand old house looked festive enough, though neither the earl nor his daughter were much in the holiday spirit. Still, they played the role of Gaiety as if wearing smiling Greek masks. Father and daughter did their duty to every guest expecting a grand celebration.
Frederick and Daphne found still another reprieve when some of the farmers dragged in the tall Christmas tree, freshly chopped from the forest. Frederick meant to speak to Clayton, to say hello, to inquire after the farmer’s family, wondering if he had made it to London after all. He had heard rumors, you know, his lordship, and he wanted to be certain all was well. Clayton turned his apple face away, slightly less brown in the winter months, ignoring Lord Staton’s gestures toward anything resembling conversation.
After the tree was set upright everyone gasped as the highest point nearly touched the cathedral ceiling. By way of Prince Albert, sadly passed nearly ten years to the day now, Christmas trees had become the fashion in England and no stately home was complete for the holiday season without one. After the mess of needles was cleared away it was time to decorate with strings of sparkling beads, candies, tinsel, paper ornaments, and candles nestled within the branches. Everyone, from the maids to his lordship, laughed aloud at the lovely sight. It was, Mrs. Ellis said to a passing maid, the most beautiful tree anyone had ever seen. Hembry Castle looked, sounded, and smelled like Christmas. Then she thought of Lady Daphne and her grandson and hid her tears behind her handkerchief. 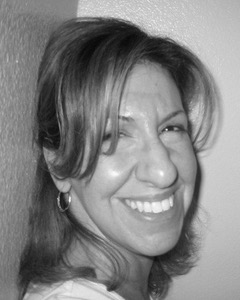 Meredith Allard is the author of the bestselling paranormal historical Loving Husband Trilogy. Her sweet Victorian romance, When It Rained at Hembry Castle, was named a best historical novel by IndieReader. Her nonfiction book, Painting the Past: A Guide for Writing Historical Fiction, was named a #1 New Release in Authorship and Creativity Self-Help by Amazon. When she isn’t writing she’s teaching writing, and she has taught writing to students ages five to 75. She loves books, cats, and coffee, though not always in that order. She lives in Las Vegas, Nevada. Visit Meredith online at www.meredithallard.com. 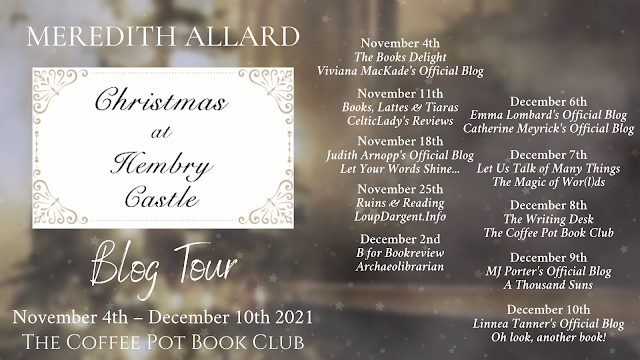