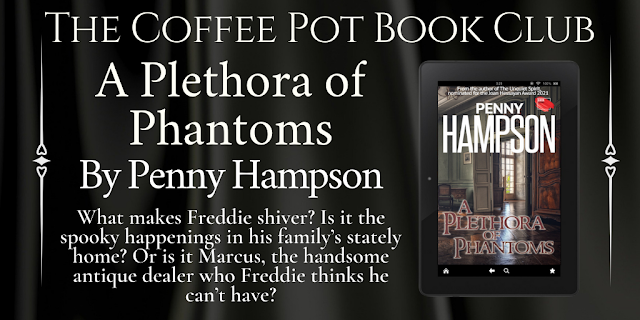 A Plethora of Phantoms
By Penny Hampson 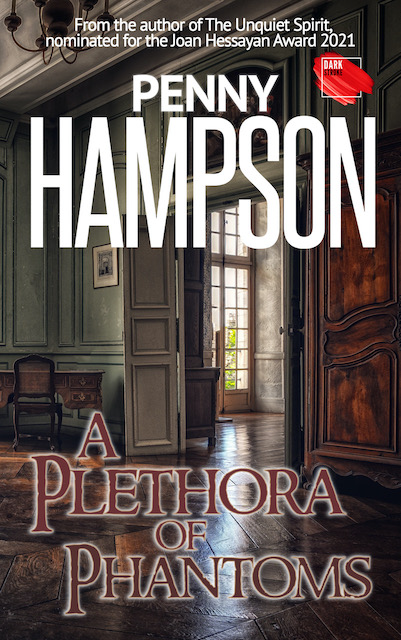 Publication Date: 20th December 2021
Publisher:  Darkstroke Books
Genre: Paranormal Suspense
What makes Freddie shiver? Is it the spooky happenings in his family’s stately home? Or is it Marcus, the handsome antique dealer who Freddie thinks he can’t have?
Freddie Lanyon has it all: a loving family, a privileged background, and a stately home filled with antiques. What his family don’t know is that Freddie is desperately unhappy.
Troubled by spirits that only he can see, Freddie Lanyon, the heir to Lanyon Park, is also in denial about his sexuality. It takes a meeting with handsome and psychic antique dealer, Marcus Spender, to convince Freddie that he might need to change.
When Freddie’s latest purchase of an antique dressing case triggers fresh poltergeist activity, he is awakened each night by an anguished spirit seeking help. Contacting the previous owner of the dressing case leads Freddie and Marcus on a journey to Cornwall, but what starts out as a straightforward quest soon turns into a challenge to their growing relationship.
Will Freddie’s restless spectral visitor be finally laid to rest? And will Freddie find the courage to be true to himself at last?

Freddie checked his phone and saw that it was getting on for one o’clock. Time to head back to the house. He’d promised to give the clients Xander was trying to impress a private tour of the property. With his beanie hat pulled low over his forehead covering most of his floppy blond locks, a battered wax jacket and muddy boots, he looked nothing like the heir to the estate as he trekked across the park towards the formal gardens. The sound of a car horn caught his attention and he watched as a cavalcade of vehicles rolled up the long driveway to the house. Xander’s guests had arrived.
Picking up his pace, Freddie cut across the lawn and headed towards the courtyard at the back of the house where he could nip in discreetly and get washed and changed before meeting the visitors.
Padding along the carpet in stockinged feet, his muddy boots having been discarded in the service entrance porch, he was just about to take the stairs to the bedroom when someone cannoned into him.
‘Terribly sorry. I wasn’t looking where I was going.’ The chap who’d almost knocked him off his feet reached out a hand and Freddie, once he’d regained his balance, found himself gazing into a pair of intelligent dark eyes. ‘I was mesmerised by all these gorgeous paintings.’
‘No need to apologise. They are rather wonderful, aren’t they?’ Freddie smiled. It never did any harm to be reminded of how lucky he was to be surrounded by such beauty. He watched as the stranger craned his neck to gaze up at the ceiling and used the opportunity to scrutinise the visitor. Tall and well-built, the man was handsome in a rugged sort of way, with dark wavy hair. Freddie could imagine him playing rugby, he certainly had the build for it, and there was something familiar about his voice.
Inspection of the ceiling over, the stranger turned and flashed a smile that almost took Freddie’s breath away. That hadn’t happened in a long time.
‘You couldn’t point me in the right direction could you… I assume you work here? I seem to have come adrift from my party. Mr Lanyon mentioned something about lunch.’ The guy’s eyes twinkled in amusement. ‘I’d hate to miss lunch.’
Freddie told himself to get a grip. No point in letting his hormones take charge. The last thing he needed was to get involved with someone.
‘Sure, just go to the end of the corridor and turn first right; the dining room is straight ahead – double doors, you can’t miss it.’
‘Cheers, mate.’
The guy sent him a grateful smile and headed off, Freddie’s eyes following him until he was out of sight. It was several seconds before Freddie dragged his mind back to what he ought to be doing and resumed his trek upstairs. He’d received a text message from Hugo saying that he’d be home late and that there was no problem with Freddie staying in his room for another night. Freddie’s mouth curled into a smile as he wondered if his brother was going to come up with some different tricks. He couldn’t wait!
Freddie paused at the bedroom threshold and sniffed. The scent of pine hung in the air and clouds of steam were coming from the ensuite’s open door.
What the…?
Rushing into the bathroom, Freddie’s jaw dropped at the sight of the nearly overflowing bath. Another minute or two and it would have been too late. Freddie scowled. This must be Hugo’s doing. He’d fibbed about going in to work and this was another of his tricks. Too bad that he hadn’t taken into account a possible delay, disaster had only just been averted. Freddie’s stomach lurched as he considered what might have happened, the last thing his father needed right now was another bill. It was definitely time to put a stop to his brother’s pranks.
Rolling his shoulders to ease his pent-up tension, Freddie eyed the bath. It did look rather inviting and it would be a pity to waste all that hot water. He checked his watch, yes there was just enough time. He started to strip off.
Five minutes later, with his eyes closed and pine scented water soothing his aching muscles, Freddie pondered his encounter with the most attractive man he’d met in a long time. 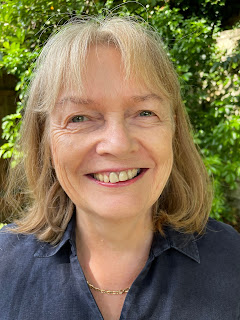 Penny Hampson writes history, mystery, and romance. Her first novel, The Unquiet Spirit, a ghostly, romantic mystery set in Cornwall, was published by Darkstroke in 2020.
Penny has also written a series of Regency romances because, as a historian, there is nothing she likes more than researching her favourite period in history and bringing it to life.
Penny lives with her family in Oxfordshire, and when she is not writing, she enjoys reading, walking, swimming, and the odd gin and tonic (not all at the same time).
Social Media Links:
Website • Blog • Facebook • Twitter
Posted by Mary Anne Yarde at 07:00