Robin Hood - Who was he?

“Just a minute, Robin Hood steals money from my pocket, forcing me to hurt the public, and they love him for it?” 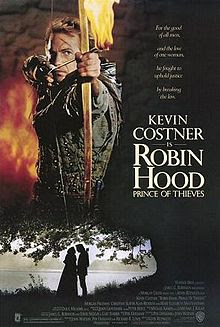 Name a champion of the poor.

What is the first thing you think of when I say Sherwood Forest?

Who was the enemy of The Sheriff of Nottingham?

Even my beloved King Arthur doesn't touch the heart of a nation quite like Robin Hood does.

"Because Sire, the poor you see, he gives to them what he takes, and, well Sire, they love him."

Isn't that's the truth. We love him and his band of merry men. We love what he stands for.

Like Arthur, Robin also has a band of loyal supporters - the good guys! 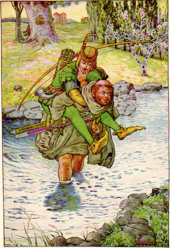 "The friar took Robin on his back" Illustration by Louis Rhead to Bold Robin Hood and His Outlaw Band: Their Famous Exploits in Sherwood Forest

He also has some terrible enemies - the bad guys!

The Sheriff of Nottingham, Guy of Gisborne, Prince John

The Sheriff of Nottingham in the 1973 animated film, Robin Hood


Robin does something that no one else seems capable of. He outwits a strong enemy. He is always one step ahead of the Sheriff. He is as cunning as a fox - no wonder Disney portrayed him as a fox in their version of Robin Hood! 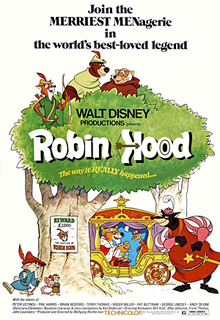 But the story of Robin Hood isn't a simple one, it is also about a battle between the Saxons and the Normans.

The Saxon's are the good guys. The Norman's are the unwelcome oppressors.

"Any objection to the new tax from our Saxon Friends?"

The Adventures of Robin Hood. 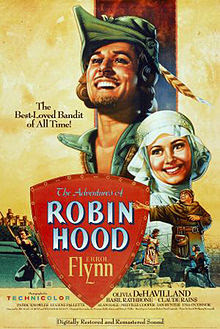 Obviously, there was tension between the Saxon and Norman camps. The Normans had massacred the Saxons at Hastings. It is said that there were so many dead on that battlefield that men died on their feet, for there was nowhere for them to lie down. But Hastings was only the beginning. William the Conqueror was brutal in his dealings with any Saxon uprisings - the Harrowing of the North is a perfect example of how William dealt with those who opposed him. So it makes sense that this battle between Robin Hood would have a Saxon /Norman theme to it.

However, we have to be careful with this analogy.  The Battle of Hastings was fought in 1066. Robin Hood supposedly lived in the 13th Century. Now, I'm not saying that the 'native' Saxons did not resent their Norman oppressors. Of course, they did. They would have wanted their country back. But did Robin identify himself as a Saxon?

There is nothing in the ballads of the time that says he did - the first mention of this connection is in Ivanhoe - Could this idea simply be a work of fiction? Is this idea a 19th Century one? Possibly.

I am going to explore the stories of this fascinating English hero in upcoming posts and I am really looking forward to it. After Arthur, Robin is my favourite English hero!
Posted by Mary Anne Yarde at 08:00