I am handing the blog over today to fantasy / children’s author, Erika M Szabo. Erika is going to introduce us to Hungarian mythology. So, take it away, Erika…! 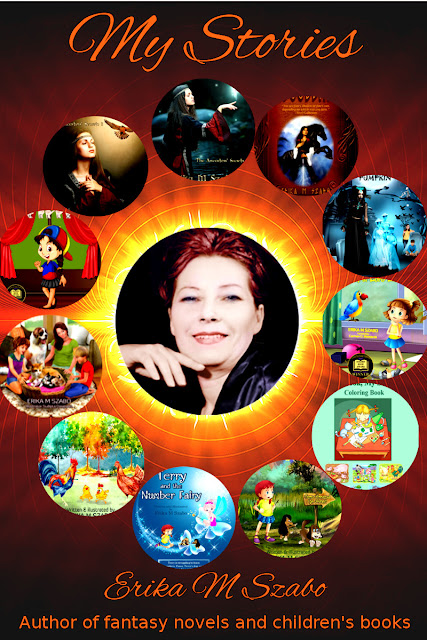 Click on the link below to find out about Erika's books....

I grew up in a small town in Hungary. When I was a young child we didn’t live in a virtual world. I didn’t text my friends, we talked. I didn’t play computer games, and I was allowed to watch TV only one hour a day.

Let me tell you, I didn’t miss out on anything.

I had real and not virtual friends to play with. I learned about nature while helping grandma to weed the garden or while we collected herbs in the woods.

In the evenings I loved listening to my old neighbour’s stories. He introduced me to old legends that were passed down to younger generations by the elders.

I added some of the Hun legends, that I learned as a child and later researched, to my magical realism, fantasy story, The Ancestors’ Secrets Series.

The Legend of the White Stag 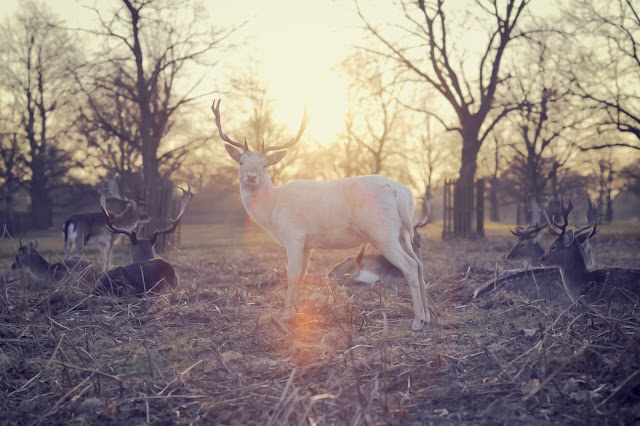 Protected by the Falcon 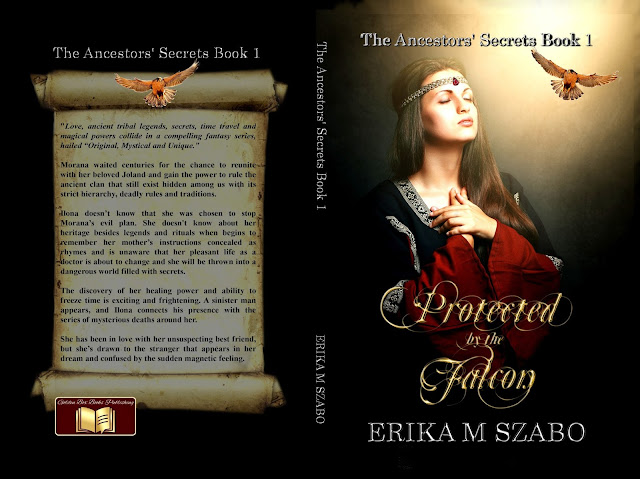 Elza gave me her present last. It was a thin, delicately woven black string with an inch in diameter thick gold pendant that was not perfectly round. The magnificent Turul bird with widely stretched wings was so detailed on the pendant that it took my breath away.

“Your mother asked me to give this to you on your birthday, if she… when she…” Elza choked the words out.

“I remember this necklace. Mom showed it to me on my ninth birthday,” I said, misty-eyed. It was exquisite, and I knew it must have been about as old as my flute. I stared at it astounded and wondered how many of my ancestors wore it around their necks.

“I made the chain from the hairs of Midnight’s tail when you were four or five.” Rua smiled.

“It is so delicate, thank you, Rua. I loved that horse.”

I put the necklace on and fingered the smooth medallion. It instantly warmed to the temperature of my skin. Suddenly, I felt Mom’s strong presence and tears welled up in my eyes. I felt her protective love deep within me.

We sat on the patio for a little while more, enjoying the autumn sun and enjoying our togetherness. We were telling stories of previous birthdays and remembered our loved ones who were long gone. We watched Tui and Gypsy exploring the bushes and digging for moles. Gypsy glanced at Rua from time to time as if checking whether it was okay for him to dig. Rua didn’t move or say anything; he just let the two dogs enjoy themselves, which they did. Later, they took a doggy nap in the shade on the patio while Rua told the legend of the great stag.

I always loved this legend. It was difficult to see the meaning of the legend behind all the symbolism, but when Dad had explained it once, it made some sense to me. He said, “The cosmos, the mother of the sun, is represented by a female horned doe, or hind. Being a symbol of the cosmos, she also carried the stars representing the people united. Just as the cosmos was her mother, she was the mother of the stag who symbolized the sun.”

“Rua, you’ve been telling us stories, but I never heard you mention anything about the four hundreds,” inquired Ema.

“There are many speculations, but nothing is known for certain. The legend says those were dark and uncertain times and that we might never find out what happened back then,” Ema frowned, “Oh, you and your legends. Never a straight answer to anything.”

“I just tell the legends as my father before me.”

Ema sighed, annoyed, and started playing with the CD player. To match her mood, she chose Brahms, and drummed the tune on her knees. Bela begged her to switch to Chopin, and when she did, everyone settled into a lazy mode. We listened to the music and enjoyed the beautiful late afternoon.

“Tell us more stories Rua,” begged Ema, turning to him.

“Okay, I’ll tell you a story about King Matyas.” Rua said as he sipped his coffee.

We all leaned back, ready for the tale. I always loved his stories about the wise and just king, but Ema cut him off before he could start the story, “But Rua, you told us all the stories about King Matyas already. Tell us why the falcon is so important in our history.”

“Well, according to the legend, the Turul is a messenger of the Creator. It sits on top of the tree of life along with the spirits of unborn children in the form of birds. When we are in need, the Turul stretches its wings over us, guides and protects us.”

Ema’s eyes turned sad and looked away, “It doesn’t protect everyone.”
“That’s true. It doesn’t protect individual people from life’s everyday cruelty. It protects us as a nation, all of us. Also, the Turul bird’s role is to protect the sword that appoints the King or Queen, who are proven to be worthy.”

“How can a mythical bird do that?”

“I don’t know, but the legend says that when the time is right and the person is chosen, they hear the falcon’s victory cry and the flaming sword mark appear on their neck with the symbol of the King or Queen on their face.”

Ema sighed and shrugged her shoulders, “Oh, Rua, these are just legends.”

“Well, there is a small truth, somewhere, in every tale that’s told. Maybe it’s just a legend. There was not a Hun who had the mark since the fourteen hundreds, so we can’t say if it’s true or just a myth.”

“Having a King or Queen is nothing but a show and symbolic representation nowadays. They don’t have the power to rule a nation like the ancestors.” Ema replied.

“That’s true…” Rua looked at Elza who touched his hand to warn him, and he didn’t finish the sentence.

Noticing the interaction, I said, “Elza please let him finish.”

Rua smiled, “There is nothing more to say. These are just legends.”
I had a feeling that we were not going to find out more from either of them. We started talking about Ema’s art show and Bela talked about his new book for a while, but soon I was itching to be alone. Bela probably sensed my mood and did not linger. He left with Tui cuddled to his chest. At first, she protested at being taken away so suddenly, but soon she was yelping good-bye to Gypsy. Ema had a new idea for a painting and quickly disappeared into her studio. Elza said she had a new recipe to try for dinner and retreated into the kitchen.

I followed her, because the comment she had made was eating at me and couldn’t rest until I found out more. “Elza, what is this mystery you can’t tell us about? Please tell me,” I begged.

“I knew you wouldn’t stop. You’re like a bulldog; sink your teeth in and won’t let go. You won’t find out more from me, so drop it.”

“No, I’m not going to drop it. You have to tell me more. Why did my mother tell me I have a birthright?”

“I would tell you if I could, believe me. I’ve said too much already. Your mother was the only one who could have told you about it.” She stared at me, pained and apologetic.

Thank you so much Erika, for sharing The Legend of the White Stag with us!
Posted by Mary Anne Yarde at 07:00