Life in the Time of Queen Mary I
By Samantha Wilcoxson


If you know anything about Mary Tudor, you know that there can be no simple description of her life. She was born a princess, illegitimized and demeaned by her father, and reigned high as England’s first Queen Regnant. Therefore, varied times in her life might see her pampered as Henry VIII’s heir while others find her waiting on her infant half-sister.

Even while a bastardized princess in baby Elizabeth’s household, Mary would have women to dress her in elaborate gowns and a kitchen staff to prepare her food to order, though she was forced to endure being referred to as ‘Lady Mary.’ Her duties would not have been physically laborious, but the mental and emotional blows struck home.
Life for the average person in the 16th century would have been rather different than the life of Mary Tudor, whether she was princess, bastard, or queen.
Most people could not afford the hundreds of candles and roaring fires of the royal palaces, so their day would be regulated by the rising and setting of the sun. This could mean, at certain points in the year, that shuffling out of bed might occur at 3am, but darkness would start limiting what could be accomplished equally early in the evening. The tasks that employed these folks during these hours were largely chores that Mary never had to think about.
You may have heard that people of this era did not bathe, but this is not precisely true. While they did not soak themselves in a shower or immerse themselves in a bathtub each day, most people would wake and see to their personal hygiene. Even Mary would have rubbed her skin with linen clothes to freshen for the day after her morning prayers. Fresh linen underwear would also be worn beneath the clothing that was too precious and difficult to wash frequently.
While women worked to get breakfast on the table, men might feed livestock or milk cows, so the average person in Tudor times might work for an hour before breaking their fast. Hearty food to fuel an active lifestyle was required. Some of that fresh milk, fried eggs, bacon, and porridge might be found at the sideboard. Mary, who would not spend her morning working in the fields would likely partake of a lighter meal than her poorer contemporaries.
Mary would spend some portion of her day reading, sewing and embroidering– her projects varying from elaborate altar pieces to simple shirts for the poor, playing music, and entertaining guests. She may not have concerned herself with the difficult work going on in the kitchen or the planting of the gardens, but she was expected to play her part as princess to perfection, even after her father had taken that title away from her. She would gracefully participate in conversation (in a variety of languages) and arrange tasteful entertainment. Mary loved music and dancing, and these passions were frequently shared with visitors.
Other girls were learning how to cook, grow herbs, treat illnesses and wounds, and a variety of other skills while Mary learned about languages and diplomacy. These girls were taught simple rhymes that would help them remember when tasks needed to be done or which ingredients would best suit different purposes. Housekeeping was a much tougher job in the days when women could not simply step out to the grocery. Women would grow their own herbs and vegetables, butcher livestock, make butter and cheese, and brew ale. These and countless other tasks kept them on their feet from sunup to sundown – often with several children in tow!
Dinner (what we might call lunch) was served at midday and was the largest meal of the day. Hot food, and plenty of it, was called for after a long morning of physical labor and an approaching afternoon that would appear no easier. Bread was a significant part of the Tudor diet, though the crusty, white manchet bread that would be set before Mary would be quite different than the heavy, grainy bread set before those in less charmed positions. Fine roasted meat might be served to Mary alongside her expensive bread, but most others would enjoy some form of pottage, a type of stew made up of whatever seasonal ingredients were available.
Following the midday meal, men would return to their plow or trade and women to their wide variety of chores. Spinning wool, gardening, washing and mending the family’s clothing, and caring for livestock and children would make for a busy afternoon. Women might supplement the family’s income by taking in laundry of others or selling surplus dairy goods. Even with the help of hired hands or live-in servants, life was arduous for most.
Supper might consist of leftovers from the earlier meal, supplemented by more bread and homemade cheese. Mary, of course, would enjoy her dinner with expertly made pies and tarts, fruits that were a luxury to most, and expensive imported wine.
A well deserved break might be taken on Sunday afternoon after church. This was the time for archery contests, leisurely strolls, and dancing. Courting couples could steal an hour or two to get to know one another with the work of the week completed. Traveling theater groups might gather a crowd or men might form a cockfighting ring. Before they knew it, time to begin work would come again.


After evening prayers, rich and poor alike would make their way to bed. For Mary, this would mean a large poster bed with layers of soft mattresses, likely filled with sheep’s wool rather than the straw used by many others. Cozy in her fleece and behind thick bed curtains, one wonders if Mary even realized that some had only woven rushes to place between themselves and the cold floor. A good night’s rest was needed before the work of the next day could begin. 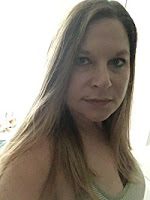 Samantha Wilcoxson is an American writer with British roots. When she is not reading or travelling, she enjoys spending time at the lake with her husband and three teenagers.

The Plantagenet Embers series debuted with 'Plantagenet Princess, Tudor Queen: The Story of Elizabeth of York'. It has been selected as an Editors' Choice by the Historical Novel Society and long-listed for the 2016 HNS Indie Award.

'Faithful Traitor: The Story of Margaret Pole' is the second novel in the trilogy, continuing the story of the Plantagenet remnant in Tudor times. This novel has received 5-stars from Readers' Favorite and a Discovering Diamond award.

The recently released final installment in Plantagenet Embers, Queen of Martyrs, features Queen Mary I and her story of the counter-reformation in England.
You can find Samantha... Blog 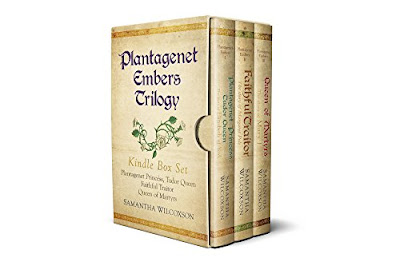 This set includes all three full length novels of the Plantagenet Embers Trilogy for one special low price!

I. Plantagenet Princess, Tudor Queen: The Story of Elizabeth of York
She was the mother of Henry VIII and wife of Henry VII, but who was Elizabeth of York? Raised as the precious oldest child of Edward IV, Elizabeth had every reason to expect a bright future until Edward died, and her life fell apart.

When Elizabeth's uncle became Richard III, she was forced to choose sides. Should she trust her father's brother and most loyal supporter or honor the betrothal that her mother has made for her to her family's enemy, Henry Tudor?

The choice was made for her on the field at Bosworth, and Elizabeth the Plantagenet princess became the first Tudor queen.

II. Faithful Traitor: The Story of Margaret Pole
Margaret Pole is no stranger to fortune's wheel. From her childhood as firstborn of the heir apparent of England, she was brought low as the daughter of a traitor. After years of turmoil as the Tudor dynasty made its roots, Margaret finds favor with her cousin, King Henry VIII.

Will the remnant of the York dynasty thrive under this tempestuous king or will Margaret discover that there is a price to pay for having an excess of royal blood?

III. Queen of Martyrs: The Story of Mary I
'God save the Queen! God save our good Queen Mary!'

When these words rang out over England, Mary Tudor thought her troubles were over. She could put her painful past - the loss of her mother and mistreatment at the hands of her father - behind her.

With her accession to the throne, Mary set out to restore Catholicism in England and find the love of a husband that she had long desired. But the tragedies in Mary's life were far from over. How did a gentle, pious woman become known as 'Bloody Mary'?