"Have you ever stopped and listened to the peasants when they tell stories of him?"
The Du Lac Chronicles - Pitchfork Rebellion

I was going to blog about one of the other knights tonight, but after reading the latest news from Glastonbury Abbey, I decided I needed to take timeout from my knights and write about the Abbey instead.

Not so long ago I blogged about the monks of Glastonbury Abbey, finding Arthur's grave and digging him up.

When I started researching Arthur, I was more than a little suspicious about this claim. It was just too convenient. The Welsh were revolting - and Arthur was being used as a kind of figure head for them, someone to inspire the men. After all, Arthur would never let his people suffer. He would come to the aid of his countrymen, no matter what.

And then there was this small issue of Glastonbury Abbey's coffers. There had been a fire and they needed the money a huge influx of pilgrims would bring. 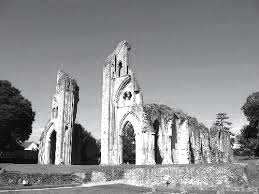 I have visited Glastonbury Abbey countless times, and I have listened to the storytellers as they describe the moment the tomb was discovered. The story they weave is very fitting with the Arthurian legend - it could almost make you believe in Merlin and his magic.

But, I wonder now if things will change. I can not help but think that Glastonbury Abbey has made a terrible mistake. For the last four years archaeologists have "comprehensively demolished" ( The Guardian) all of the wonderful stories and myths that were associated with the Abbey.

I think the myths and the stories were a big part of the Abbey's appeal - I certainly loved listening to them, and when you are stood there amongst the ruins listening to the stories, you can almost believe them. It is as if the ruins of the Abbey itself wants you to believe them, is willing you to. How are they going to tell those stories now? With comedy? "I am sorry to say, but the story I just told you...is just that...a story, no truth in it whatsoever." Everyone may laugh, "Oh those monks, they were naughty!"

Will it make the place any less holy, if the stories we all took as truth...maybe with the preverbal pinch of salt...are actually well, lies?

Why would we want to visit the Abbey to see Arthurs last known resting place, now that we know the truth...he probably isn't there...he probably was never there.

The discovery, if you can call it that, has put the Abbey back in the spotlight, but I fear for the wrong reasons. Of course, if they had discovered that Arthur had been there, then of course, I would probably be writing something very different. But I fear that it is a gamble they took, that they may have just lost. I do hope I am wrong.

This new knowledge would not stop me from visiting the Abbey. It is the most tranquil and beautiful of places. I just wished they had kept the fantasy alive for a little bit longer.

But, when I think about this new knowledge, I cannot help but smile, because maybe the Welsh of the 12th Century get to have the last laugh. Their Arthur was not a man who could be dug up...He was and is The Once and Future King.

Email ThisBlogThis!Share to TwitterShare to FacebookShare to Pinterest
Labels: Arthurian Legends, Camelot, King Arthur. King Arthur stories, Knights of the Round Table, Myths and heroes, the legend of King Arthur