Okay, you got me. I write about Lancelot ( well, his sons...Lancelot does get a mention now and then) in my forthcoming book The Du Lac Chronicles, out early 2016. I am very excited. But you are not here to hear me waffle on about my book...if you are...please correct me...I can blog about it all day, if you like! You are here to read my take on Lancelot, so let's begin.

Now, what do we know of Lancelot?

He was Arthur's best friend.
He was chivalrous.
Pretty good at the joust.
Even better at the sword.
Went on a quest to find the Holy Grail.
Bit of a ladies man.
Had an affair with Guinevere.
Fell out with Arthur...Unsurprisingly.
Caused a Civil War.
And was responsible for the downfall of Arthur, the knights, Camelot, and consequently the whole of Britain.

He had a really busy life! 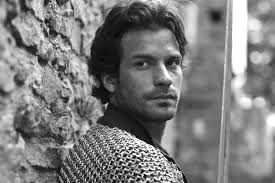 But surprisingly, until the 12th Century, Lancelot was virtually unknown. Chrétien de Troyes immortalised him in  Le Chevalier de la Charette. Here he is portrayed as Arthur's greatest knight, the most saintly of men, who so happens to have had an affair with the Queen.

I wonder if de Troyes had any idea how influential his work would become when he wrote it?

Lancelot tries so hard to be a good knight, but his world comes crashing down around him simply because he cannot help himself when it comes to love.

But that doesn't seem to stop us all from loving him. I think if he had not had that affair he would probably make us all feel slightly queasy. You can't be that good - all of the time.

Now it is often said that there are no new stories -- all the stories have already been written...what do they know? It has been suggested that the love affair between Lancelot and Guinevere is a poor mans tale of Tristan and Isolde, and I think they are probably right, but that doesn't matter and I don't think we should become too hung up about it.

I cannot not (sorry for the double negative) talk about the Grail when it comes to Lancelot. We need to look at a 13th Century French text called Prose Lancelot which began this whole idea of an Arthurian quest for the Holy Grail and it expands on the love affair between Lancelot and Guinevere as well. Lancelot eventually finds the Grail, but he cannot look on it for very long, for he has sinned.

I am always intrigued by the fact that although we all love Arthur -- who is noble, worthy and everything a King should be -- we can't seem to help ourselves when it comes to Lancelot. He is just so likeable.

So let me give you a brief rundown of Lancelot's life.

He was the son of King Ban of Benwick. He end up in the care of the Lady of the Lake...hence his name du Lac..of the lake... The Lady of the Lake then sends him to Arthur's court where he becomes a knight, meets the Queen and falls in love. He battles twenty knights successfully -- is meant to battle the Copper Knight, but the Copper Knight flees from his home, Dolorous Guard. Lancelot takes the castle and renames it Joyous Guard.  Elaine of Corbenic pretends she is Guinevere, tricks Lancelot and he begets a child with her... they name the child Galahad. Guinevere banished Lancelot from court because she is so enraged by his betrayal?! Lancelot looses his mind for a bit, is eventually summoned back to court by Guinevere. Goes on the hunt for the Holy Grail, finds it. Arthur dies, the Queen wants nothing more to do with him. He becomes a hermit and finally becomes a priest.

Of course there are various different version of his tale. I very much doubt there is little truth in any of them...but like the stories of Arthur, there is something about the man that captures our attention and we cannot help ourselves. I know I will always have a kind of love affair with Lancelot. If it wasn't for him and his stories, I wouldn't be writing this.