Sir Gawain is one of my favourite knights -- I think I might have said that before. Why do I like him so much? Oh come on, he took up a challenge issued by the Green Knight. And when I say green, I mean the knight was green. We are talking green skin, green hair...green!

Apart from that very odd quest, what do we know about him?

It is said he was Arthur's nephew. He was the son of Arthur's sister Morgause and King Lot of Orkney. His brother was Mordred. He is a true friend to Lancelot and an all round good egg. 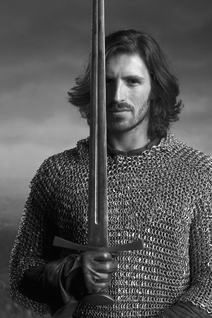 Gawain is everything Lancelot is - without falling in love with the wrong person and therefore causing war and mayhem. He is courageous and strong. Fierce to his enemies, but kind to the weak. A friend to young knights and a defender of women. He is also next in line to Arthur's throne -- not that he would ever consider challenging Arthur for it.

Now, Lancelot may have had the Holy Grail Quest and the affair, but Gawain, as I have already alluded to, had the Green Knight. I don't think you can get better than the Green Knight. It is my favourite Arthurian tale and comes from a late 14th Century chivalric romance, called...wait for it...Sir Gawain and the Green Knight. It is written in verse, by that famous poet anon (although the poet is commonly referred to as the Pearl Poet), and is one of four narrative religious poems all of which are written in the North West Midland dialect of Middle England...all very J.J.R Tolkein -- but I think Gawain had it a lot worse than Frodo Baggins -- as Gawain had to do this quest all on his own without the help of Elfs and such...

For those who are not familiar with the tale, I shall share with you a very abridge version of events

The New Year celebrations are interrupted by a Green Knight, on a green horse, who challenges the knights to a friendly contest. He asks if any knight of Arthurs' is brave enough to chop off his head. It is a slightly odd challenge, but Gawain takes him up on the offer and chops his head off. But the Green Knight does not die, instead he picks up his head and tells Gawain to meet him at the Green Chapel this time next year so he can return the favour.

Gawain, unsurprisingly, is ever so slightly concerned, but he is a knight and he never goes back on his word. As the year ends he set out to find the Green Chapel. He discovers a rather spectacular castle and he meets Bertilak de Hautdesert and his beautiful wife. Bertilak assures him that the Chapel is two miles away and welcomes him into his castle, for it is a honour to have a Knight of the Round Table as a guest.

The next day Bertilak goes hunting, but he tells Gawain to give him whatever he might gain during the day. Bertilak's wife then tries her best to seduce him, he allows her one kiss, which he then gives back to Bertilak. The next day he gives her two and he gives Bertilak what he gains. The third day she gives him a girdle of green and gold silk -she tells him if he wears it he will stay safe from harm. She then gives him three kisses. That evening he gives Bertilak three kisses but keeps the girdle for himself.

"When bold Sir Gawain got back home
they bought out cake and ale
and huddled round a roaring fire
to hear him tell his tale."
Sir Gawain and the Green Knight. Tony Milton and Arthur Robins

Is there any truth in the tale? Oh, why not! If Arthur can defeat 960 men in one charge at Badon Hill, then I am sure we can allow Gawain's rather bazar beheading game with someone who is green.