I have spoken often of Badon Hill in my previous posts, but I think it deserves a post of its own. Nennius wrote of Badon Hill as does Gildas. Even our modern day Hollywood has told how a great king defeated the terrifying Saxons at Badon Hill. 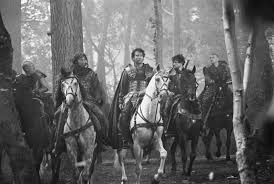 
It is generally accepted that the battle occurred around AD500 and it was a fight between the Britons and those 'terrifying Saxons.'

Gildas mentions the battle, he describes it as the "....last great victory of the fatherland..." and it did halt the Saxon invasion for another forty years or so. It must have been quite some battle to scare the Saxons away for that long.

Archeologist back up Gildas claim.

"...There is a lack of sixth-century Anglo-Saxon pottery in areas such as Sussex, Essex and Hertfordshire which have all yielded fifth-century material...the Anglo-Saxon expansion in the Upper Thames ceased for fifty years after Badon..." Michael Wood. In Search of the Dark Ages.

Gildas, unfortunately, is his usual vague self when it comes to the finer details. He does not mention Arthur, or where the battle actually took place. What Gildas does tell is is :

The battle was in the south-west
There was a siege on a hill.

Thank you Gildas, that helps a lot!

So, from what Gildas tells us, we are looking for a hillfort in the south-west of Britain...? Maybe.
Okay...next step would be trying to find out where the prominent hillforts were. There are four possibilities.

Of course there is a strong possibility that it could be none of the above. But most historians kind of sway towards Liddington Castle, because it is next to a village called Badbury...could this have been Badon? 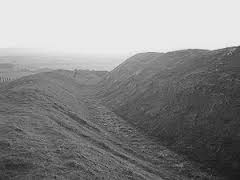 Liddington Castle was in a strategic position between the main Anglo-Saxon settlements and "...Liddlington marks one of the great Dark Age road junctions..." Michael Wood. But it does beg the question...Did the hillfort actually belong to the Saxon's? Did the Britons drive them out?

The other question of course is...was Arthur actually there? Nennius states that he was, "...960 men fell in one day..." But Of course Nennius wrote this a mere 300 years after the event by which time Arthur was a folk hero already. Maybe Nennius was merely documents stories about Arthur's famous twelve battles that he had been told rather than writing hard sourced facts, others argue that he found the list in old Welsh war poetry. But I do wonder what he was thinking when he wrote that Arthur felled 960 men on his own, surely he did not really believe that?

Thats all for now. See you soon.