I can not blog about Arthur and not mention Camelot. It would be like talking about William the Conquerer and forgetting to mention The Battle of Hastings. 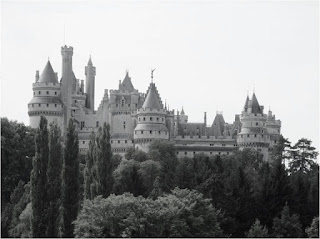 Okay, this is difficult... I am so tempted not to say it...but the truth is the name Camelot was the invention of a French poet who wrote in the twelfth century. Sorry.

Now, I am not saying that Arthur did not have his own hillfort. If he was as great as we are all led to believe then I have no doubt that he did.

With the departure of the Romans, the hillforts became places of power once again. Building on a hill has two benefits..the first, you have a pretty good view of the surrounding area so you can see if any enemy army is approaching and secondly...you are on a hill...you have the higher ground in a fight.

In the mid 1960's and early 1970's the Camelot Research Society decided to excavate one of these hillforts in South Cadbury in Somerset, which caused a great deal of excitement. They found a drystone wall surrounding the fort. They found evidence of timber buildings including a Great Hall or Feasting Hall, as it was sometimes known. But one thing was for certain, it would certainly not have looked like the fairytale castle that is portrayed in Merlin. The remains of Mediterranean pottery was also found at Cadbury, so we can conclude that who ever lived there was pretty wealthy.

No one can say whether Cadbury was Arthur's home. The truth is, no one knows where Arthur lived. Nevertheless, I like the idea of Camelot and somehow it wouldn't feel right to talk about Arthur and not mention his legendary home.