The Scattered Flock
(The Flock Trilogy Book 2)
by
Jana Petken 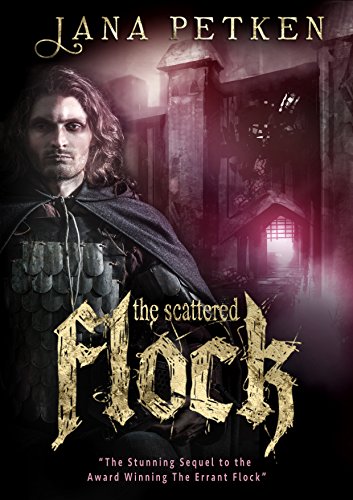 David Sanz’s journey south is halted abruptly after a devastating turn of events. In a tense battle for survival against thieves and the militia he has been fleeing from, he finds himself shackled and incarcerated in the prison he once guarded.

The Duke of Sagrat’s brother, Rafael Perato, has survived the war, and the royal court’s treacherous intrigues, but when news of his brother’s death reaches their Most Catholic Majesties his life is thrown into turmoil. Banished by the king, and tasked with carrying out insurmountable missions, he becomes entangled in a web of deadly plots and subterfuge, which threaten not only Sagrat but his very life.

In this fast paced epic, David Sanz and Rafael Perato face adversaries more devious and powerful than themselves, and it is only faith, courage, and unlikely alliances, that may save them both from the Inquisitor and the deadly marauder, Alejandro.

David Sanz's life has been turned upside down and now fate, once more, has turned her hand against him. After a frantic flee South in a bid to save his own life, he finds himself in chains and facing an uncertain future. But maybe, here, at last, is his chance to have his revenge.

I was looking forward to reading the sequel of The Errant Flock, and this book certainly did not disappoint.  With a captivating and emotive story, The Scattered Flock is a book that is very hard to put down.

Petkin's brings 15th Century Spain back to life and in particular the corruption and the cruelty of The Spanish Inquisition.

With unforgettable characters and spellbinding writing, this is a book that gets under your skin and makes you wonder how anyone survived the horror of the Inquisition.

There are several antagonists in this story, but none is as vile as de Amo, he really is a contemptible creature, and he certainly made my skin crawl, which only goes to show how well crafted Petkin's characters are.

As with the last book, I feared for David’s life, and I wondered how much more Petkin’s was gong to throw at the poor man! But he is strong, and his character certainly developed further through the course of this book ~ he is an unlikely hero, but one all the same.

I really liked the character of Rafael Perato. He painstakingly puts all the pieces together as he tries desperately to discover who murdered his brother. Rafael is not afraid to get to the truth, but the more he discovers, the more he realises how deeply corruption is embedded into the ruling class and that of the Church. One wrong move on his part and he would find himself facing his own mortality.

I Highly Recommend this book and I look forward to reading more books by this author.

Jana Petken served in the (British) Royal Navy as a leading Wren Regulator, equivalent to a sergeant in the military police.
After the Navy she worked for a travel company as an overseas representative.
She was a security guard at the BBC World Service radio station. Afterwards she spent twelve years as a bodyguard for a Saudi Arabian Princess.
Her final career was as a cabin-crew member for British Airways. Unfortunately, she suffered serious injuries on board a flight. The aircraft, a Boeing 747, was flying at 39,000 feet above Africa when it was caught in clear-air turbulence. As a result of that accident, she endured three major operations on her spinal cord, and was forced into retirement.