The Viking war mentality – and why it made them such feared fighters.
By Sarah Dahl 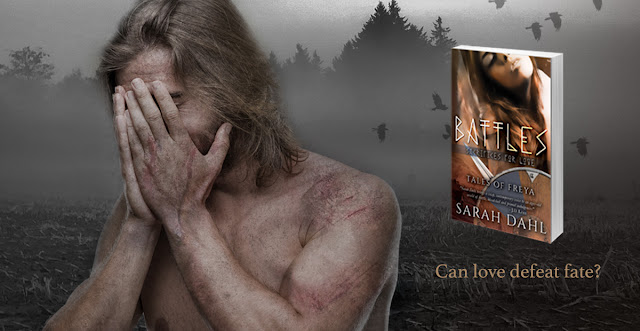 The wisdom of Odin
Cattle die,
Kindred die,
We ourselves die just
the same;
But the good repute
Never dies
Of one who has earned it. (Håvamål, Verse 76)

The king of the Nordic gods is Odin. It is him who started the first war in the world, in the realms of the gods. He was a warrior himself, a strategist and maker of battle plans. So the cult of Odin was central for Viking warriors, whether they went raiding or on war campaigns, like my couple Aldaith and Nyssa do in “Battles – Sacrifices for Love”. They are marching to the battlefield under a chieftain who will reward them for good service. Every comrade who marches with them hopes for a good fight that earns him or her an eternal reputation of honour and bravery. They also believed that Odin was invisibly present on the battlefield, to decide who should die and who should win the fight.

They also believed that the outcome of every battle was predetermined – their fate was already decided. Therefore their warrior mentality made them unafraid to die: They couldn’t change their fate, or with their fighting alter the date they would die and face Odin – It was all already woven into the thread that was their life by the Norns, female deities or spirits. When a warrior died, the Norns had cut their life’s thread on the predetermined day. Simple as that. Nothing they could do would change their fate. So when my warriors Aldaith and Nyssa line up in the shield wall, they usually aren’t that concerned. They know they are good, and they have each other.

In their minds it wasn’t important IF a warrior died, but HOW: honour was everything and their reputation the highest good. It was vital that they fought well and honourably, without cowardice, and showed the gods they were worthy. Such dead warriors went to dwell in Valhalla with Odin. It was the ethereal Valkyries who chose the fallen warriors that would meet the mightiest of the gods  to serve him as fighters. It was this afterlife that most warriors strived for. But it wasn’t an easy afterlife – Odin chose the warriors for his own interest, to create the best possible army for his last battle at Ragnarok, the end of the world, when all realms would be destroyed. So his warriors had to train well in Valhalla for this, every single day. They would fall, and then rise again to fight anew. Odin’s chosen warriors would have to again and again defy fear and fight without thinking of their own mortality – just like they had done down on earth, Midgard.

This unconcerned attitude caused the Viking armies to have a reputation of total fearlessness, which gave them a considerable advantage over other armies. It made Viking armies be feared and admired: their fatalistic mentality allowed them to trust the gods and their predetermined fate. They could throw everything they had into the fight, as long as they acted honourably and as valuable part of the army. To fall in battle wasn’t the end but could be seen as a goal, a reward, the chance to gain an eternal reputation as a fighter worthy of Odin.

Or so my warriors believed until this fatal day in my new story “Battles” – when, for the first time ever, Aldaith and Nyssa step out of line and the usual beliefs, and challenge their fates in more ways than one.

So what started in “Bonds – Under the Armour” as a sudden surge of worry before a campaign continues in “Battles”: Aldaith suddenly discovers he cares too much, he fears not for his own but his lover’s life. He can’t stand the thought of losing Nyssa, no matter if she then ended up with the mighty god or not. He feels selfish, irrational, is deeply confused. Driven by foreboding and fear, he gets distracted, endangers himself, leaves the lines. He finds himself out of his usual “warrior mentality” that Odin would like to see – and has to deal with the consequences. Unlike his usual self, he turns into a madman just to get to Nyssa, his fear for her gives him superhuman power and lets him mow down men left and right as if he was a berserker.

But can this possession that is set off by his love and despair save her life? The campaign ends, the battlefield empties – but the lovers’ battles aren’t at all over.
After the battle, the real battles start, and they have little to do with swords and shields …

Battles – Sacrifices for Love
(The Seventh Tale of Freya) 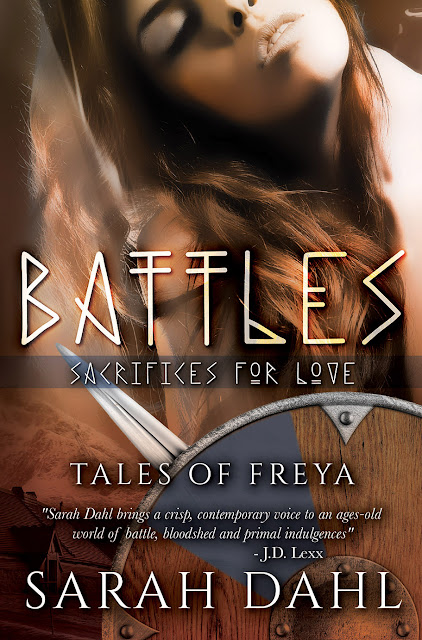 In a world of crackling fires and rough landscapes, long winters and bloody raids, the immediacy of life and death ignites undeniable passions. Warriors and monks, healers and housewives -- all follow the call of their hearts and bodies to indulge in pleasures that may forever change their lives.

Shoulder to shoulder, in life, love, and the battlefield – that is what Viking warrior Aldaith and his shield maiden Nyssa promised each other. On their way to the battleground he dreams of their very own sensual rewards after the upcoming campaign. But what begins as just another shield wall turns out to be the ultimate test of their bond. This battle might be their last …

Set in the Viking era, this is a stand-alone, adult read.

Aldaith was talking to himself and Odin's ravens, who had descended in swarms to examine the feast laid out for them. Black silhouettes hobbling past, Odin's helpers cleaning the churned up ground with their beaks — the god's gentle hand removing blood and intestines. Nothing else moved; the battlefield was as near dead as the men they had carried away. The Valkyries had just left. Chosen the warriors to be taken to Valhalla's doors. He wished he had seen the ethereal women, watched them swipe up the fallen and carry them gently to their mighty god, so they could feast and fight and be merry once again, forever rewarded.

He wiped away the water that escaped his eyes. "Please, gods … please let her survive this. I need her."

He looked up at the dark skies. The moon was just out. The last rays of light had retreated. Aldaith was grateful for nightfall. But it also filled him with fear. This darkness would stay now. It would never again leave his heart, and paralyse him until he met his fate with the Norns.

He cursed at the wet ground as he continued to rake through it. It had to be here where she fell! He needed the pendant back to give it to her for the journey. She should be wearing it proudly when she looked into Odin's eye. 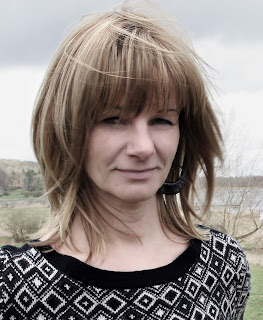 Sarah Dahl lives on the edge of the rural German Eifel and writes historical fiction primarily set in the Viking age. She also works as an editor, translates, and coaches new writers in German and English. She is interested in everyday life in bygone centuries and the human stories that may have occurred behind the hard, historical facts. Her author page is: sarah-dahl.com