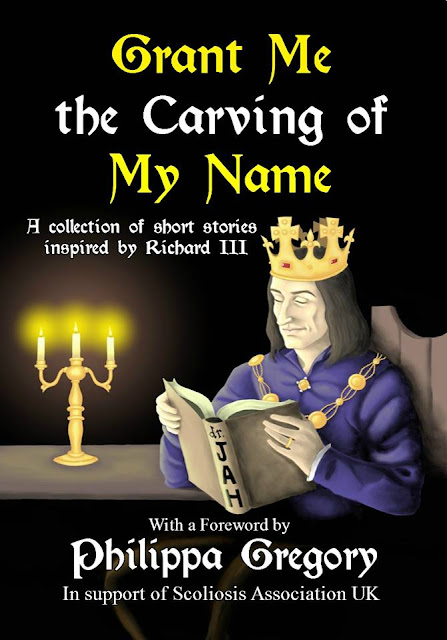 An international group of authors who have all been inspired by England’s last Plantagenet King, Richard III, are working together to raise funds in support of Scoliosis Association UK through sales of a collection of their work.
Grant Me the Carving of My Name is an anthology of 15 short stories by a dozen authors from the UK, Ireland, the USA and Australia. It takes its title (with her permission) from a poem by poet laureate Carol Ann Duffy which was read by Benedict Cumberbatch at the king’s reburial in Leicester in 2015.
The collection also features a Foreword by acclaimed historical novelist Philippa Gregory, author of The White Queen, which was dramatized by the BBC in 2013 and featured a rare positive portrayal of King Richard, by Aneurin Barnard (Dunkirk, War and Peace).

When editor Alex Marchant and Wendy Johnson, a key member of the Looking for Richard Project responsible for rediscovering the king’s grave, joked about getting together to publish short stories they had written about this most controversial king. The enthusiasm of the other authors approached led to the dream becoming a reality.
The collected stories offer an alternative view of this often-maligned king and range from glimpses of his childhood and domestic life, through battles and rebellions, to explorations of the afterlife and his historical reputation. By turns elegiac, mystical, brutal, light-hearted, uplifting, there’s something for everyone within these pages.

King Richard himself suffered from scoliosis – a lateral curvature of the spine that would have become increasingly disabling and painful as he aged, and was only revealed during examination of his skeleton after his grave was excavated in 2012. Scoliosis Association UK (SAUK) supports children and adults with the same condition throughout the UK today and was the obvious charity to support with proceeds from this book.

The editor and authors

Alex Marchant is author of two books telling the story of the real King Richard III through the eyes of a young page in his service. While aimed at children aged 10+, The Order of the White Boar and The King’s Man have also been enjoyed by adults They have been called ‘a wonderful work of historical fiction’ by the Richard III Society, and recently received a Discovered Diamond award from the Discovering Diamonds review website.
The Order of the White Boar is largely set in and around Middleham Castle in Wensleydale, King Richard’s primary home in the north of England, and also York, not far from where Alex now lives.
Two other contributors, Wendy Johnson and Marla Skidmore, also live close by in North Yorkshire, with Jennifer C. Wilson based not far away in Tyneside, meaning the core of the authors are northern-based – as was King Richard for much of his life before he became king. In fact, he referred to a return to York as a ‘homecoming’ in letters, and on his royal progress following his coronation, he wended his way back up through the country to the city, where his rapturous reception was such that he immediately decided to invest his young son, Edward, as Prince of Wales in the Minster. No wonder, then, that Richard is often seen as England’s only ‘northern’ king.
The contributors
Narrelle M. Harris • Wendy Johnson • Riikka Katajisto • Susan Kokomo Lamb • Joanne R. Larner • Matthew Lewis  • Alex Marchant (editor) • Máire Martello A playwright based in Manhattan • Frances Quinn •  J. P. Reedman  •
Marla Skidmore • Richard Unwin •  Jennifer C.Wilson

Grant Me the Carving of My Name can be pre-ordered as an ebook and will be available as a paperback also from 24th November 2018 through Amazon at mybook.to/GrantMetheCarving and via editor Alex Marchant and contributors.
It will be launched online at:
https://www.facebook.com/events/271580673561044/
and Alex will also be selling and signing copies and chatting about life as an author at The Kitchen café-bar, Haworth Road, Cross Roads, Keighley from 3 p.m. on Thursday 6th December and at Harrogate Library on Wednesday 12th December from 1.30 p.m.