A conversation with Raelle Logan.

Thank you for having me on Myths, Legends, Books and Coffee Pots. My name is Raelle Logan.  Yes, the name is a pen name. The name Raelle is taken from my father’s name, which was Raymond and is a dedication to him. The Logan part of the name was just a name I’ve always liked.

Hi Raelle. I am so glad you could join us today. I enjoyed the story about your pen name! I would love to know more about your fabulous book Blackheart. What inspired you to write your book?

What inspired me to write BLACKHEART? I’ve always loved to write. The first book I wrote, when I was far younger, was a Western, which is probably because my father absolutely loved Western movies when I was a child.  The book was very bad, since I wasn’t yet experienced enough to write and it was trashed pretty quickly. Later, when I was in my teens, my Mom worked at a library and one summer she brought home a bunch of books for me to read in order to keep me busy over my school vacation time. Many of the books in the pile were historical romance.  I’ve always had a love for pirates. Over the years, many of the books I read were about pirates but the accuracy of the books was a little questionable. I wanted to write a book about pirates that was more accurate to the reality of their true lives but was also a romance. BLACKHEART is drawn from that desire.

Did you face any challenges when you were researching the period your book is set in?

Challenges I faced in researching the pirate period? Oh, there were many. Learning about weapons, ships, clothing and speech were a huge challenge. How to discover the truth about pirates themselves became one of my biggest goals. There are a ton of books with information but trying to uncover the facts about these reclusive mariners is tough.  Truth and fiction have definitely blurred over time; Hollywood movies haven’t assisted in the process.  I had to unbury books written by authors who had done a ton of research themselves. I was able to uncover many authors who are as dedicated to the truth as I am, fortunately, but it did take time.

It sounds like you went on quite a journey during your research. Do you think there is anything about your book that sets it apart from others in your chosen genre?

What sets my novel apart from other pirate romance books? I would say my dedication and yearning to write a book that is more realistic to the reality of the pirate genre and is also a passionate, sensual romance that is entertaining and seduces the reader into the story, luring them to want to read more. 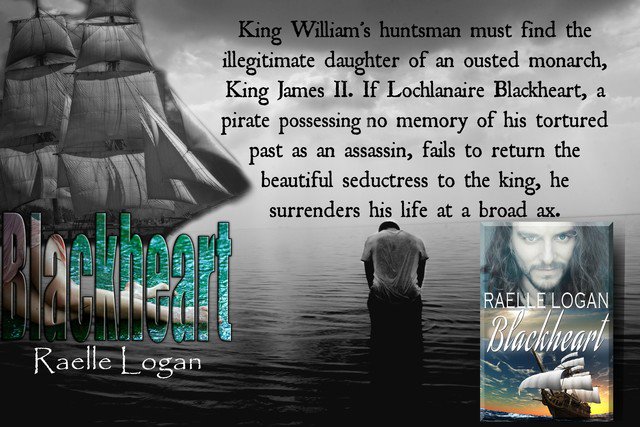 Your book sounds amazing. Can you tells us what you are currently working on?

Currently, I am working on another pirate romance but one with an entirely different story line from BLACKHEART.  The book is in the editing stage, which I hope to have finished in a few months.

Good luck with your new release!

Scroll down to find out more information about Raelle's wonderful book! 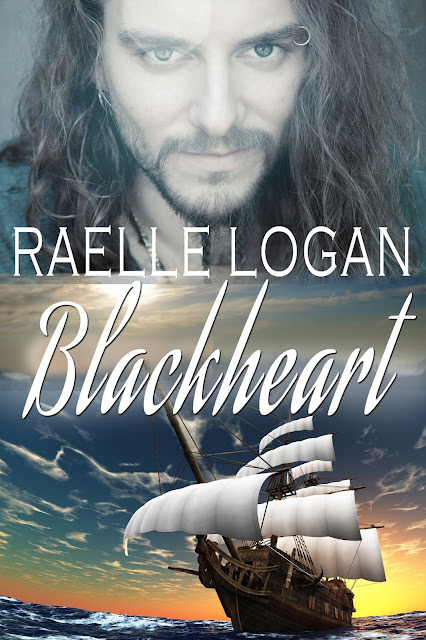 No memory of his past, sentenced to death for a duel gone horrid, Lochlanaire Blackheart is commanded by King William to hunt Siren Rain. She’s the illegitimate daughter of ousted King James II. In capturing his prey, Lochlanaire must retrieve the ruby signet Siren dons. That jewel is the talisman of King James II, which proves Siren’s ancestry. Lochanaire, however, is unaware that at the moment he casts sail aboard his ship, Siren’s been kidnapped by his pirate brother, Zore. Lochlanaire must battle this cutthroat for the princess, spinning Siren into his web of treachery. Afterward, they’re shipwrecked, entwined in a union of inconvenience when Lochlanaire weds Siren under the witchery of gypsies. Lochlanaire soon enlightens Siren of her true father’s identity. She seduces her captor, desperate to conceive Lochlanaire’s child. She believes he cannot surrender her to die at King William’s hangman’s noose if their blood unites. When Lochlanaire’s stalked by a ghoul slaughtering the pirates aboard his ship, he never realizes that this fiend possesses a wicked secret. Siren must unravel all the Blackheart brothers’ secluded evils and save Lochlanaire, for he threads together a travesty by which to sacrifice himself to King William, all while opposing the two seething brothers who seek his demise for the tragedies reaped in Lochlanaire’s shattered past. If Lochlanaire fails to evade the death shroud shadowing his footfalls, Siren will lose the breath-wrenching privateer who is her assassin hunter, the possessor of her lusty soul, and her only love.
Amazon • Barnes and Noble 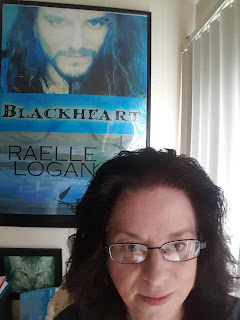 I’ve been writing stories since I was a very young child.  Back then, my writing interests were mainly in a Western genre, owing to my Dad being a HUGE Western movie fan.  My mother worked at a local library and one day she brought home several books she hoped would keep me occupied throughout the summer months while I was out of school.  Several of those books were written by author Victoria Holt.  Needless to say, I was hooked on romance.  After I threw out the Western manuscript I had written, I delved into the romance genre with hearty gusto, reading every book I could find.  In later years, after marrying a racecar driver, a neighbor tossed an old laptop over the fence in our backyard into my husband’s arms, as he wanted to help with my husband’s racing career.  I got curious about the computer, sat down one day and starting writing on the notepad, only to discover, to my absolute horror, that I couldn’t save my work.  I bought a new computer and have been writing since.  After writing my first manuscript, I realized I wanted to write a book about pirates that was more true to the reality of their real lives than is usually portrayed in books and film.  Having only the limited knowledge of what I had seen in paper and movies, I took a year off in order to do historical research, learning about pirates and their ships, weapons, clothing and, language. I even read the WEBSTER’S dictionary, so I could use words for the time period I write about.  BLACKHEART is my first published manuscript. Currently, I live in Littleton Colorado with my husband and our cat, Ransom.
Connect with Raelle: Facebook • Twitter • Goodreads