Life in the time of Time of the Tudors: London’s Prisons, by Dean Hamilton #History #Tudor #Prisons @Tyburn__Tree

Life in the time of Time of the Tudors: London’s Prisons
By Dean Hamilton

“It is enough to know, too much to see,
That in the Counter there is room for thee”
William Fennor, The Counter’s Commonwealth

On September 22nd, 1598, two men wandered out into the damp fields of Hoxton, north of London. On that muddy ground, they drew swords – at least one of which was “a certain sword of iron and steel called a rapier, of the price of three shillings” and fought.  At the end of the affray, one man lay dead, suffering “a mortal wound, to the depth of six inches and the breadth of one inch” to his right side. That man was Gabriel Spencer, a play-actor in the Lord Admiral’s Men and the man that killed him was Ben Jonson, the playwright, friend of William Shakespeare and one of the most famous dramatists of the age.

Jonson was imprisoned in Newgate, one of London’s more notorious prisons, until his October court date when he pled guilty to the indictment.  At his indictment, the playwright claimed “benefit of clergy”, an ancient legal loophole for literates that allowed “clergy” to escape or mitigate sentences by the secular legal courts in favour of the more lenient ecclesiastical courts. Jonson read the required “neck-verse” (Psalm 51) that demonstrated he could be considered “clergy”, was branded on the hand, and released.

Prisons were part of the febrile landscape of the city, a part and parcel of its existence, as much as palaces, markets, churchyards and cathedrals. They were as much a part of London as the steady bustle of commerce in Cheapside or the churning tidal flux of the Thames. They had age and substance and a long, checkered weight of history that was old even in Elizabethan times.

With an estimated 14 major prisons, London is believed to have had more than any other European capital. These prisons included the Tower of London (usually reserved for Royal prisoners and prisoners of particular note), the Gatehouse (mainly political prisoners and controlled by the Privy Council and the Bishop of London), the Fleet (for debtors), Newgate (debt and serious criminal felonies such as murder, arson and thievery), Ludgate, Poultry Counter, Wood Street Counter (for theft), Bridewell (a women’s prison for vice-related crimes such as prostitution), White Lion, the King’s Bench (debtors), Marshalsea (religious offenders and maritime offences), Southwark Counter, the Clink (often Catholic priests & recusants), and St. Katherine’s.

Newgate was established in 1188 AD. The Fleet was built in 1197 AD, while the Clink dates back as far as 860 AD, originating as cells in a priest’s college operated by the Bishop of Winchester. The Wood Street Counter, Poultry Counter and Bridewell were all comparatively new prisons established in the mid-16th century. Bridewell was one of Henry VIII’s palaces, and was passed to the City of London Corporation by the young and short-lived Edward VI to be used as an orphanage, a work-house and a place of correction for “disorderly women”.

How did you end up in an Elizabethan prison? It’s important to note that prison was not generally considered a punishment. It was where you were held to await punishment – whether that was payment of your debts, a public whipping, the stocks or the noose or any of the other highly inventive sentences that could be inflicted upon anyone found guilty.  The most common reasons for imprisonment were debt and assault, although in truth virtually anyone with a grudge and coin could swear out a warrant and have someone arrested. One characteristic of Elizabethan-era constabulary was they often seemed to be infinitely swayable by mendacity and greed. Gamini Salgado, the author of the classic The Elizabethan Underworld, notes that the sergeants of the Watch were highly adept at playing the middle position, accepting payments and bribes from both the complainants and suspects, until one “outbid” the other.

Prisons themselves were very much a “pay-as-you-go” experience with various levels of accommodation suitable to a prisoner’s station and purse. The Counter had three levels of accommodation available – the Master’s Side, the Knight’s Ward and the Hole. The Master’s Side provided private accommodation, bedding and access to better quality food, but always at a steep price and requiring  a continuous stream of payments to the wardens and Keepers of the prison. When coin ran out, the prisoner would be shifted to the Knight’s Ward, which was less accommodating but every bit a pernicious in separating the woeful prisoner from his coin. The last stop on this inevitable journey was the Hole, a brutal and squalid accommodation typified by the number of prisoners that died of disease, exposure and starvation.

Debtors, in particular, found imprisonment a significant problem. It was virtually impossible to work to pay off ones debts while being held, and, as noted, debts in prison generally only rose as the rapacious costs mounted. Philip Stubbes, author of The Anatomy of Abuses, noted “It grieveth me, the pitiful cries and miserable complaints of poor prisoners in durance for debt and like so to continue all their life, destitute of liberty, meat, drink…and clothing to their backs, lying in filthy straw and loathsome dung, worse than any dog…”

There are also instances of individuals of means deliberately entering into custody to escape creditors, claiming bankruptcy while living a comfortable life on the Master’s Side until the desperate creditors were willing to negotiate a much reduced settlement to at least reclaim some small remuneration.

Almost all of London’s various prisons followed this same general pattern, with some minor variations. The Fleet’s version for the Hole was ironically nicknamed Bartholomew Fair, after one of London’s biggest Charter fairs held in August each year. Newgate in particular had a deeply malevolent reputation with its overcrowding, poor sanitary conditions and disease. In 1537, eleven Catholic monks, imprisoned by Henry VIII, were supposedly chained to pillars and allowed to starve to death. The prison was notorious for disease, violence, gaol fever and its unrelenting stench. Newgate’s version of the Hole, dubbed Limbo, was described as “full of horrors, without light and swarming with vermin and creeping things” and “a most fearful, sad, deplorable place…They lie like swine upon the ground, one upon another, howling and roaring…”. Newgate’s notorious reputation also gave rise to numerous rumors, folktales and ghosts, one of which served as the inspiration for my novella BLACK DOG. The Black Dog of Newgate was a spectral hound that would appear the night before an execution to collect the souls of the damned. It was only one of a number of amorphous haunts that called the prison home.


The Elizabethan penal system was rife with abuse and corruption, stemming mainly from the utterly inadequate remuneration provided to manage the prisons, supply victualling and day-to-day operations. The Clink, whose name became synonymous with imprisonment in general, was widely considered to be the one place in London you could be guaranteed to find a Catholic priest or a recusant. It is believed the name is in reference to the sound the fetters and chains made, audible through a barred and grated window that opened onto the street where prisoners could speak to family members and receive charitable alms.

The death of Gabriel Spencer wasn’t Ben Jonson’s first brush with London’s penal system, nor was it his last.  Jonson was imprisoned in the Marshalsea in 1597, notably with his future victim Gabriel Spencer and another play-actor, for "Leude and mutynous behavior” in writing and performing the play The Isle of Dogs. As The Isle of Dogs is lost to history, we have no clear idea of just what about that particular play offended the civil authorities enough to jail the three men. Jonson saw prison a third time in 1605 for offending King James’s Scottish sensibilities with his satirical play Eastward Ho. Despite the supposed punishment threat of having their noses and ears cut off, the men were released unscathed.

Title Page of Ben Jonson’s Eastward Hoe, which saw him imprisoned for the 3rd time in 1605.

It is clear the London’s prisons remain not just a penal threat on the urban landscape, but a significant impact on the cultural development and impact of the Elizabethan age. Thomas Nash (who co-wrote The Isle of Dogs with Jonson), noted of the Counter, “a gentleman is never thoroughly entered into credit till he hath been there”, stating “Trace the gallantest youths and bravest revelers about town in all the by-paths of their expense, and you shall infallibly find, that once in their lifetime they have visited the melancholy habitation….there is no place of the earth like it, to make a man wise…I vow that if I had a son, I would sooner send him to one of the Counters to learn law, than to the Inns of Court or Chancery.”

There is no record of William Shakespeare having spent any time in London’s many prisons, though based on his many contemporaries experiences, it might be surprising if the Bard had not seen that “melancholy habitation” at some point in his long career. 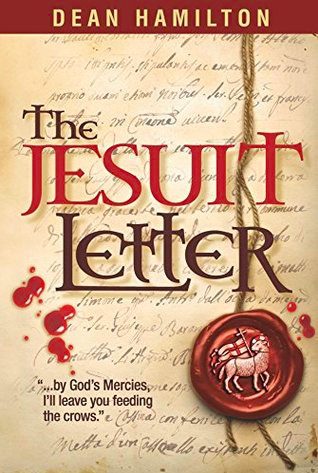 Ex-soldier turned play-actor Christopher Tyburn thought he had left bloodshed and violence behind him when he abandoned the war against the Spanish in Flanders, but fate has different and far bloodier plans waiting.

The innyards of London are closed due to plague and the Earl of Worcester's Men are on the road, touring the market-towns of the Midlands.

When Tyburn accidentally intercepts a coded letter from a hidden Jesuit priest in Warwickshire, he is entangled in a murderous and deadly conspiracy. Stalked by unknown enemies, he must race to uncover the conspiracy and hunt down the Jesuit to clear his name. . .or die a traitor's death. His only hope - an eleven-year old glover's son named William Shakespeare.
Amazon 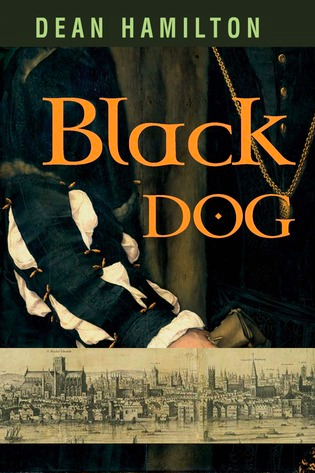 Hangings were always a good draw.

When the Earl of Worcester’s Men take advantage of the crowds drawn to a mass execution, they hoped for a strong turn-out and a fat payday. They didn’t expect to run afoul of London’s most notorious prison rooker, the Black Dog.

Now with one of the troupe facing slow death in gaol or penury in the face of the Black Dog’s threats, the troupe must turn to its newest member for help. Christopher Tyburn, ex-soldier turned play-actor, must dive into cesspool of London’s back-alleys, pursuing the Black Dog’s secrets in order to turn the tables on the deadly blackmailer.

But you don’t stalk the Black Dog without consequences…. 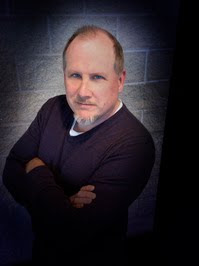 Dean Hamilton is the author of The Jesuit Letter, Black Dog, and the soon-to-be released (2019) Thieves’ Castle.

He was born in Winnipeg, Manitoba and spent the first half of his childhood chasing around the prairies and western Canada before relocating to Toronto, Ontario, Canada. He has three degrees (BA, MA & MBA), reads an unhealthy amount of history, works as a marketing professional by day and prowls the imaginary alleyways of the Elizabethan era in his off-hours. Much of his winter is spent hanging around hockey arenas and shouting at referees.

He is married, with a son, a dog, five cats and a turtle named Tortuga.