Historical Fiction author, Jen Black, is talking about the inspiration behind her fabulous series — The Scottish Queen #MaryQueenofScots #HistoricalFiction @JenBlackNCL


Historical Fiction author, Jen Black, is talking about the inspiration behind her fabulous series — The Scottish Queen

I always wanted to write and the stories that interested me always seem to be set in the past. Even at age eleven I was an avid Mary Queen of Scots fan and later I supported – and still do - Richard III.
I didn’t have the confidence to attempt writing until I was thirty and even then, I kept it very much a secret enterprise. It was hard work with a typewriter and Snopak!
My favourite author will always be Dorothy Dunnett, and it was reading her rather austere conception of Marie de Guise that set me researching and thinking about the character. Dunnett’s conception was a very good one, but I began to think of a softer, warmer personality and she slowly grew in my mind. Matho was a minor character in Fair Border Bride and several people told me how much they liked him and why didn’t I write about him?
So, I did. I brought the two characters together in this trilogy. The everyday facts are as close to history as I can get them for everything but the relationship between the Dowager and Matho, because Matho is entirely fictional. I hope Marie had an Englishman who helped her but I doubt it!

The SCOTTISH QUEEN trilogy is filled with action, romance, loyalty and betrayal; set against the turbulent English-Scottish wars of the 1540s, complex characters surround the infant queen of Scotland. Powerful lords fight for their own survival and Englishman Matho Spirston becomes entangled in the plots that surround the valiant Dowager Queen struggling alone to save her daughter’s crown. 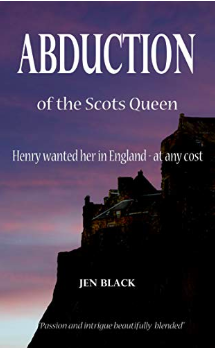 Encouraged by Henry VIII’s promised reward, Matho and Harry set out to abduct the infant Scots Queen and bring her to England even though Matho thinks they have as much chance of success as a "duckling chased by a fox.” Others pursue the same quest – namely Meg Douglas, King Henry's headstrong niece, who flatters Matho into helping her and at the same time snares the interest of Lord Lennox, who alternately woos her and the Dowager Queen. The adventures that follow are swift paced and full of twists and turns. 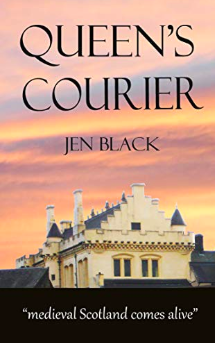 Against a background of political intrigue and Tudor violence, love is not easy to find or sustain. The Queen Dowager repudiates it, Lord Lennox balances Meg’s attributes against those of the Dowager and the lures of Henry Tudor. Matho Spirston falls for Scots lass Phoebe, the English invasion of Edinburgh brings disaster, Meg nurses her guilty secret and Lennox makes his choice. 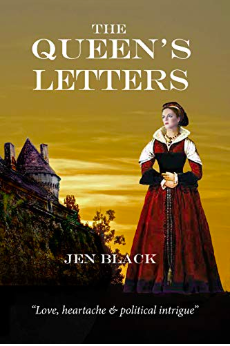 Grief-stricken, Matho puts his life in danger when he volunteers to deliver the Dowager Queen's letters to France. Dodging assassins, befriending teenager Jehan and saddled with the Dowager’s illegitimate, outspoken niece, danger intensifies when he sets out to unmask a powerful enemy and the hangman threatens once more. Meg achieves her dearest wish, but finds it is not all as she imagined.


From The Queen’s Letters

Matho landed feet first, fell onto his backside with a thud that snapped his jaws together and slid toward another drop. A voice called out nearby as he fell over the edge of the roof, dropped into something wet and smelly, and re-bounded onto the hard, cold cobblestoned yard. Pain sprang up in his shoulder as if someone had hit it with a sledgehammer. Snatching a short, swift breath he knew from the stink that he had landed on what the Aydon farmers would have called the muck heap.
The voice came closer; French phrases that meant nothing to him. Making careful movements with one hand jammed against his shoulder, he rolled to his knees. The satchel containing the Dowager’s letters hung askew, and the strap dug into his neck.
“Monsieur! Monsieur!” A brisk volley of rapid French followed. The stable lad, his torch held high, loomed up beside him.
“Help me up,” Matho croaked. His newly learned French had deserted him.
A warm hand helped him to his feet. Matho, bent like an old man and none too steady on his feet, stood in the inn yard and gazed open-mouthed at the thirty-foot drop he had survived; then the rosy glow that lit the sky above the building caught his attention. Sparks flew up against the indigo sky and the hollow roar of the flames grew louder as a portion of the roof gave way.
He half-turned, lost his balance and grabbed the lad’s arm to stop himself falling. “D’ye speak English?”
“Oui, monsieur.”
“My French is not good.” He took a deep breath to steady his heart, still going at a gallop.
“Many English arrive in Dieppe. They speak no French.” The youth’s tone was either an accusation, or dismissive; most probably both.
Matho rubbed a hand across his face. “Aye, well. There’s no call for it back home. What’s yer name?”
“Jehan Bourdain.”
“Help me get my horse, Jehan? The whole lot is going to be burning soon.” He gestured to the smoke and flames stretching high above the roof of the inn and decided against helping douse the fire. The layout of the place was unknown to him, his French had deserted him and his back pained him every time he moved a certain way. In his present condition, he would hinder more than help.
Still gripping the flaming torch, Jehan disappeared into the stable.
“Is there not a lantern you can use, lad?” Matho called, stumbling after him. “You’ll set the stable afire with that thing.” He spied a horn lantern on the window ledge, reached for it and grimaced as a pain, like a hot wire, ran through his back.
Since Jehan was busy saddling his horse, Matho lit the fat candle inside the lantern and doused the torch in a bucket of water.
“Are there other horses here?” he called, breathing in the warm, musty smell of horses, hay and oats.
Muffled by wooden partitioning, Jehan’s voice drifted back to him. “One horse only. The Scotsman took the other before the fire broke out.”
“Well, my advice would be to get yourself and the other horse well away from here before it burns down.”
“I cannot leave. I have nowhere to go.”
“Go home.”
“This is home.” Jehan led Matho’s horse, saddled and bridled, out into the yard.
“The inn belongs to your parents?”
“My parents are dead. I work here, and sleep with the horses.”
Matho grunted. There was no need to ask how the parents had died. The sweating sickness had taken half a village not far from Corbridge last winter, and Phemie’s aunt in Edinburgh much more recently. Such things were commonplace, but unlucky for the lad. “Well, get as far away from the fire as you can.”
Sparks whirled dangerously close on eddies of hot wind, and the roar of the flames grew louder. Harried figures hurled bucket after bucket of water into the building, yet the fire glow captured one window after another. A man staggered out, coughing, and sagged to his knees in the middle of the yard. Four men followed him, a bundled shape carried between them.
“Hurry, lad. Let’s be away from here. And get the other horse. We can’t leave it to burn.”
He checked his pack was tied behind the saddle, soothed his horse and limped across the yard with the tense, trembling animal nudging his back in its hurry to be away from danger. Jehan followed with a sturdy chestnut on a lead rope which he thrust toward Matho.
“I get the saddle.”
Before Matho could complain, the lad raced back into the stable and reappeared with a saddle clutched in his arms, a bridle and a large bag slung over one shoulder. Grinning, he speedily tacked up the horse. “Now we go, yes?”
A roar rent the air, and fierce light lit their faces. The horses snorted and skittered sideways.
“Christ, the roof’s fallen in.” Matho stared at the doomed inn, hardly aware that Jehan had mounted his horse. “And the straw’s alight,” he said with resignation, watching a spark land in the straw bale by the stable door. A shy, tentative flame sprang into life. “Come on, let’s get away from here.” 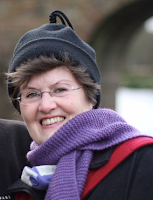 Jen lives in the lovely Tyne valley between Hexham and Newcastle in north east England, a stone’s throw from the Roman Wall and with a castle that dates from the 1100’s round the corner. Writing and photography are her main interests and walking her Dalmatian Tim twice a day keeps her fit. She has a degree in English Language & Literature and managed academic libraries for a living. Her father’s family have been traced back to the 1700’s on the Welsh and English border—a place she has never been, but her maternal grandfather worked in Skye, and there is one Scottish great-grandmother in the family tree, so if ever there’s time, perhaps there’s more to learn on that score.