It is my very great pleasure to welcome historical mystery author,
D. J. Niko onto the blog today. Before we crack on with the interview, let’s take a quick look at Niko’s latest book. 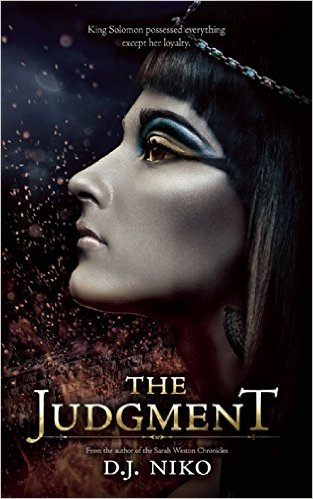 Upon the death of his father, Solomon has been appointed king of the united monarchy of Israel and Judah and charged with building the Temple of the Lord in Jerusalem. He travels to Egypt to negotiate with Pharaoh Psusennes II for gold for the temple and to improve relations between the two nations. There he falls in love with the pharaoh’s beautiful daughter, Nicaule, and the two kings agree to an arranged marriage. Against her will, for she loves another, Nicaule follows her new husband to Israel.

Forty years later, Solomon’s empire is on the verge of collapse. Power has made him arrogant, permissive, and blind to the scheming of his wife and one of his lieutenants to topple the united monarchy. As the king’s faith falters and his people’s morals collapse, enemies gather at the gates of Israel. A visit from a mysterious queen restores Solomon’s perspective in time to save his soul—but it is too late to preserve his kingdom.

Someone who once was loyal to King Solomon has come back to claim the crown of Israel—and tear Solomon’s empire asunder.
*** 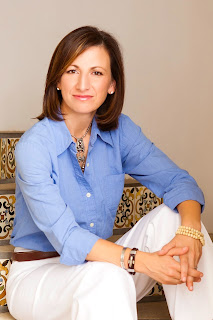 MY: Welcome to the blog! Could you tell us a little bit about your journey to becoming a published author.

DN: I’ve always been a writer, having started my career in journalism. As a journalist, I had travelled across the globe on assignment (and on personal adventures), so I used my experiences as a fiction platform. Also a lover of ancient history (I am Greek, after all), I combined the two passions to write historical thrillers. It was a bit of a rocky start, since I didn’t know what I was doing. But after many revisions and rejections, my first manuscript was bought by a wonderful publisher who then wanted to turn the stories into a series. That’s how The Sarah Weston Chronicles was born.

MY:  What does your average ‘writing day’ look like?

DN: I’m afraid there’s no such thing as average in my house, since I have twin 7-year-olds and a great many demands. I try to rise early (4 a.m. most days!) and work while my house is quiet. But it doesn’t always work out.

MY: It sounds like you have your hands full! I have four children so I know what that is like!! Are there any authors that you particularly admire? And if so, why?

DN: I’m a big fan of Wilbur Smith. Partly because I’ve spent a great deal of time in Africa, where many of his novels are set, and can relate to his content. But he’s also an excellent storyteller.

MY:  What are you currently working on?

DN: The fourth novel in The Sarah Weston Chronicles. It takes place in the American West and takes readers deep into Native American legend, mythology, and spirituality, while weaving in current-day issues such as land disputes and human rights. This new book (untitled as of yet) will also involve a young adult voice in addition to Sarah’s, which I hope will give readers a new perspective.

MY:  If you could give advice to an aspiring author, what would it be?

DN: Write every day, improve your craft, and don’t give up too easily. Every rejection gets you closer to a “yes.”

MY: Authors are often portrayed as being cat owners who drinks a lot of  coffee. Is this true for you?

DN: Well, I do have a cat (here she is). As for coffee, I pretty much think it’s a gift from the gods. 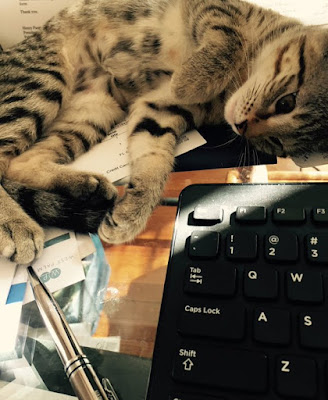 MY: She is so sweet!! What does ‘perfect’ day look like?

DN: Being somewhere quiet, preferably outdoors with a great view, with my laptop, uninterrupted for eight hours straight. There would have to be the opportunity for long walks in nature to clear my head, and, at the end of the day, a glass of good wine.

MY:  Sounds perfect! What is your biggest vice?

DN: I’m a bit of a research junkie, so I sometimes overthink things. I often have to tell myself to just write, already!

MY: If you could meet anyone from the past, who would it be and why?

DN: This is kind of a tough one—so many possibilities! I’d probably want to meet one of the great British explorers, such as Mary Kingsley, to hear about the world’s great places before they were trampled by man.

MY: Where do you see yourself in five years?

DN: I can’t imagine it will be much different than it is today. Even with increased success, which hopefully will come in time, one must keep writing.
MY: Last question…could you possible share an extract of The Judgement with us?

DN: It would be my pleasure.

Excerpt from THE JUDGMENT (released May 2016)

Night came swiftly to the valley of Jezreel. Basemath sat on a worn carpet on the ground of her prison-tent, knees gathered to her chest. Even in spring, the night’s breath was frigid as it blew across the open valley. A chill traveled down her spine, as much a response to the cold as to the fate that awaited her.

Though it would have offered her comfort, she refused the blanket that had been placed in the tent for her use. She recognized the coarse weave of the wool, striped in faded blue and violet and fringed on the ends, as the work of her people. She wondered which house Shoshenq’s men had pillaged and from whose bed they had plucked it. She imagined the inhabitants, ordinary folk judging by the quality of their textiles, being driven from their house, if they survived at all, scattering from their towns like ants, frightened and stripped of everything. She viewed the stolen blanket as a symbol of their suffering and left it be, for accepting it would feel like a betrayal.

She was grateful for this: her bindings had been cut. She pushed the long trumpet sleeve of her gown back and regarded the bloodied skin of her wrists, scraped raw by the jute. It stung no more than the humiliation of being taken prisoner.

The tent of her captivity was barely big enough for four people to stand upright, shoulder to shoulder. It was made of woven goat hair strips that had been stitched together to make a broad cloth and secured to the ground with wooden pegs. A branch of olive wood held up the ceiling. A meager flame burning in a clay saucer lamp flickered against the tent walls, casting long shadows in the semidark.

Basemath heard a man clear his throat outside her tent and realized she was being guarded. Her face tightened. This was a foil to her plan to exit the tent in the thick of night and search for her daughter. Even if it cost her life, she was determined to save Ana’s. The thought of her precious child in that heathen’s hands ignited a fury she did not recognize in herself. Anger and violence were not her way. But if it came to that, she would disembowel the Egyptian before seeing him strip the girl of her purity.

She inhaled deeply to let the rage simmer down. She needed her wits about her. She stood and walked to the flap covering the tent door. She peered through a slit and gazed at the sky. The full moon hung low above the horizon; she was facing east. She parted the fabric ever so slightly, hoping her movements would go undetected.

It was a fool’s hope. The guard noticed right away and pointed his spear at her, barking something in a dialect she did not recognize. He was a tall man of great girth, whose eyes shone with a murderous glint.

She did not retreat. “My thirst is great. I want a cup of water.”

He jabbed the air with his spear, urging her back inside.

She stood her ground, staring into his eyes, two obsidian marbles that seemed devoid of intelligence. “Bring me water.”

The tip of his spear touched her ribs. He spat out more words. When again she did not move, he twisted the spear.

She heard the linen of her gown rip and felt a sting. She glanced down and saw blood seeping slowly from the flesh wound. “You are godless,” she hissed in Hebrew.

“He is merely carrying out orders.” A male voice came from the shadows.

Basemath was surprised to hear Hebrew spoken in the enemy camp. She watched the guard’s reaction to the invisible intruder. He didn’t flinch.

He stepped into view. In the blackness of night, she could make out the lines of his halug, the long tunic that identified him as an Israelite. The decorations on the garment—a metal belt cinching the waist and embroidered trim along the sleeves, hem, and neckline—betrayed his status. She could barely see his face.

“Hello, Princess.” He edged forward. “It has been long years since we last met.”

Basemath froze when she realized who stood before her. There had been rumblings about the traitor’s return to Israel after he had been driven out of the country for masterminding a rebellion against her father. She attempted to speak, but the words were trapped in the cage of shock.

“Aren’t you going to greet your future king?

Where can I purchase The Judgment?
Amazon

Where can I purchase The Sarah Weston Chroincles series?
Amazon 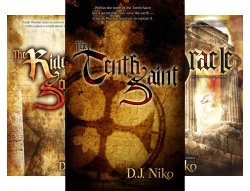 D. J. Niko is the pseudonym for Daphne Nikolopoulos, an award-winning journalist, author, editor, and lecturer who has spent her entire adult life traveling the world. As a former travel writer and zealous adventurer, she has visited remote spots on six continents, many of which have inspired her archaeological thriller series, The Sarah Weston Chronicles, as well as her historical novel, The Judgment. She was born and raised in Athens, Greece, and now resides in Florida with her family.
Useful Links
Twitter handle: @djnikobooks
Facebook page: D.J. Niko
Website: www.djnikobooks.com