When it comes to gods, Oannes has to be one of the most obscure ones out there. The tale about a mysterious figure who emerged from the sea onto the Babylonian shore to enlighten mankind, seems clouded by the darkness of aeons lost, almost erased by time. 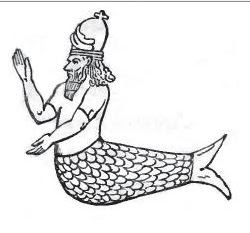 According to Jonathan Black in his excellent book ‘The Secret History of the World’ Babylonian Marduk priest Berossos wrote around 281BC about a being who had the head and body of a fish and the face and torso of a man. The being was called ‘Oannes’ and it spent the day among people teaching them geometry, architecture and other sciences as well as agriculture, the letters and the arts. After spending the day on land among the people, at sundown Oannes would return to the sea.
“He brought them the knowledge of letters, sciences and all kinds of techniques…”
-Berossos, Babyloniaca
Ancient Amphibious or aquatic deities are not exclusive to Mesopotamia.
Another account of a half-fish, half-man deity is that of Matsya first avatar of Vishnu, who is depicted as having a human top half of his body with the lower bottom half being that of a fish. Matsya is credited with saving the first human from the deluge and with saving the Vedas from a demon.
In Mali, Western Africa, the Dogon people hold the Nummo twins in a special place in their belief system. The Nummo Gods were central to the creation of man.
In: Marcel Griaule’s ‘Çonversations with Ogotemmeli,’ he describes the Nummo Spirits as spirits of the water, present in the sea, lakes, rivers or any body of water. They were described as having shiny green and scaly skin, having a human top half of the body and a snake’s bottom half. The twins were involved in giving humans two souls; one male, and one female.
The idea of more advanced creatures coming from the sea to make contact with mankind should seem just as plausible – if not more so – than beings making contact from outer space. The oceans of the earth are vast and their depths are still a mystery to us. More and more new species are being discovered in the world’s oceans every year.
One only has to look at species of sea animals such as dolphins and whales to realise how intelligence is not at all an exclusive quality to the human species.
But perhaps it is our own definition of intelligence that is too narrow.
Contact in the opposite direction is still a possibility: Humans could develop the minds’ potential in a way that makes it possible for us to communicate with cetaceans.
“It is of interest to note that while some dolphins are reported to have learned English – up to 50 words used in correct context – no human being has been reported to have learned dolphinese.”  - Carl Sagan
What would the dolphins and whales of the planet’s oceans have to say to us if we could communicate? Would they praise us for our technological abilities, would they ask us about electromagnetism, the internal combustion engine or computers?
Or would they try to teach us? Would they try to point us in the right direction with regard to developing more advanced qualities such as empathy, compassion and the ability to find joy?
Cetaceans naturally share everything and do all their activities together, they display caring behaviour towards each other, they are playful and freely show their emotional state to each other. For all of mankind’s prowess, we can’t really say that we’ve managed that much yet.
I chose the name of ‘Oannes’ for the main character in my debut novel ‘ORB’ because I conceived this protagonist to be someone who is always caught between two things, two choices, two worlds. The word ‘amphibious’ has its root in a Greek word roughly meaning: ‘both lives.’
The Oannes of antiquity moved back and forth between the world of men and the world of the Gods, between land and the sea. He sought to enlighten mankind. In ‘ORB’ Oannes is not the enlightener but the enlightened, it’s almost as if he’s chosen by the orb and given a special mission.
Whether modern or ancient, the world of mythology is inhabited by imperfect Gods seeking contact with people in need of a helping hand. Is our world, a world of imperfect people seeking the help of flawed gods?
Maybe – like Oannes himself – we are all between two lives.

“…stories like the Oannes legend, and representations especially of the earliest civilizations on Earth, deserve much more critical studies than have been performed heretofore, with the possibility of direct contact with an extraterrestrial civilization as one of many possible alternative explanations…”
Shklovski and Sagan, p. 461


'An aeronautical love story from an altered world’ 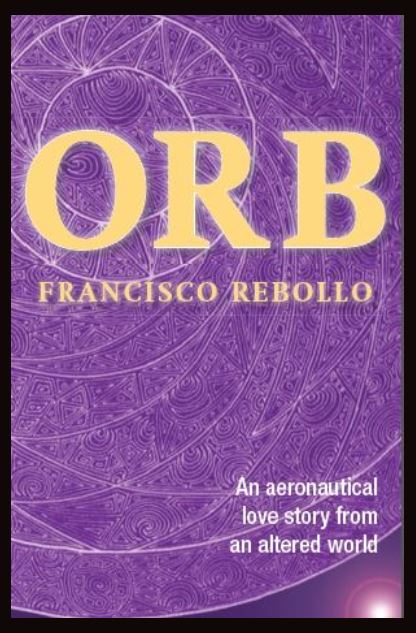 All is about to be unveiled…
Oannes Jones is an airline pilot living in a much altered world where a pervasive technology seeps into every part of people’s lives in order to create a compliant, unthinking society.
He believes he has found his purpose in playing father to Riply, a young girl not his own. But he also feels hopelessly torn between two women, one of whom is Riply’s mother.
And then it happens: a dangerous mid-air encounter with a mysterious ball of light – the Orb.
The encounter awakens him to a new reality. Life, the world and even dreams begin to look and feel different. His friends begin to change as well. Clues are laid out for him to follow, most of them provided by Riply.
As dark forces begin to encircle, something happens that will change everything for many people, not least for the child whom Oannes loves.
The Orb nears…
Everyone changes…
Here goes the autopilot…
Where can I purchase a copy of ORB?
Amazon
About the author 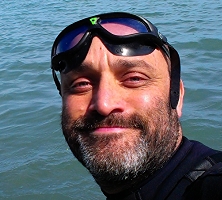 Hi, my name is Francisco Rebollo. I'm a writer and pilot.  I've been an airline pilot since 1998. I'm from Mexico. I've flown and lived across Europe and North America. In 2013, I suffered injuries and got grounded. During those 16 months on the ground, I turned to my writing as a way to get over what was a very difficult time. After a long journey, I am back flying again.
I have just finished my first novel: 'ORB' An Aeronautical Love Story from an Altered World. The novel deals with flying, love, migration, the paranormal, war, spirituality and the nature of the superstate. The book is fiction but is also based partly on my own experiences in the air. 'Fractals' (a poetry and prose collection) is also in production. I began my writing career as a songwriter. I attended music colleges in Mexico and USA. I began writing poetry while backpacking across Europe during the trip which eventually brought me to Ireland - where I now live permanently. My poem: 'MIND GAP (London Fireworks)' made the 'Word on the Waves' 2015 long list. My articles ‘Why Mexicans Celebrate St. Patrick’s Day in September’ and'The flower of Twenty and the Day of the Dead' have been featured in the ‘West Cork People’ (Mar 2014/Oct 2014.) My poetry has featured in e-publications like: 'Poetry24,' 'The Poetry Daily,' 'Democracia Real Ya!', and 'El Fugaz Ciberdiario;' as well as 'Zaytoun CIC's' website and newsletter. I perform regularly at 'pSoken Wrod' (a renowned 'spoken word' event in west Cork, Ireland.)