It is with the greatest of pleasure that I welcome historian and author, Sharon Bennett Connolly and her fabulous blog, History… The Interesting Bits, onto Myths, Legends Books & Coffee Pots today to talk about...

Born on 29th September, 1252, at Kenilworth Castle, Eleanor de Montfort was the only daughter and sixth child of Eleanor of England. Her mother was the fifth and youngest child of King John and Isabella of Angouleme, and sister of Henry III. Her father was Simon de Montfort, Earl of Leicester, leader of the rebels in the Barons’ War.
Eleanor had 5 older brothers; Henry, Simon, Amaury, Guy and Richard.


Her father, Simon de Montfort, is remembered as one of the founders of representative government. He was a leading figure of the Second Barons’ War. He and his eldest son, Henry, were killed at the Battle of Evesham on 4th August 1265. On her father’s death, Eleanor fled to exile in France with her mother. The women settled at the Abbey at Montargis until Eleanor of England’s death there in 1275.
In 1265, in return for Welsh support, Simon de Montfort had agreed to the marriage of his daughter, Eleanor, to Llewelyn ap Gruffydd, Prince of Wales. De Montfort’s downfall had postponed the marriage, but in 1275, in a move guaranteed to rile Edward I, King of England, Llewelyn reprised his marriage plans and the couple were married by proxy whilst Eleanor was still in France.

Shortly after, Eleanor set sail for Wales, accompanied by her brother, Amaury, a Papal Chaplain and Canon of York. Believing the marriage would ‘scatter the seeds which had grown from the malice her father had sown’, Edward arranged for Eleanor to be captured at sea. When Eleanor’s ship was taken in the Bristol Channel, the de Montfort arms and banner were found beneath the ship’s boards.
Eleanor was taken to close captivity at Windsor, whilst her brother Amaury was imprisoned at Corfe Castle for 6 years.
In 1276 Llewelyn having refused to pay homage to Edward I, and was declared a rebel. Faced with Edward’s overwhelming forces, and support slipping away, Llewelyn was forced to submit within a year. The Treaty of Aberconwy reduced his lands to Gwynedd, but paved the way for his marriage to Eleanor, at last; it’s possible that the marriage was one of the conditions of Llewelyn’s submission.

The marriage of Eleanor de Montfort and Llewelyn ap Gruffydd was an extravagant affair, celebrated at Worcester Cathedral on the Feast of St Edward, 13th october 1278. The illustrious guest list included Edward I and Alexander III, King of Scots. Edward’s brother, Edmund of Lancaster gave Eleanor away at the church door, and Edward paid for the lavish wedding feast.
While the marriage did not prevent further struggles between the Welsh and the English king, there was relative peace for a short time and Eleanor may have encouraged her husband to seek political solutions. She is known to have visited the English court when Princess of Wales; and was at Windsor on such a visit in January 1281.
However, on 22nd March, 1282, Llewelyn’s younger brother, Dafydd, attacked the Clifford stronghold of Hawarden Castle and Llewelyn found himself in rebellion against Edward I yet again. At the same time, Eleanor was in the final few months of her pregnancy and Llewelyn held off taking the field until the birth of his much hoped for heir.
Eleanor and Llewelyn’s only child, a daughter, Gwenllian, was born on 19th June 1282; Eleanor died 2 days later.

Llewelyn himself was killed in an ambush on 11 December of the same year, at Builth, earning himself the name of Llewelyn the Last – the last native Prince of Wales.
Gwenllian was taken into Edward I’s custody, and sent to be raised at the convent at Sempringham, where she eventually became a nun. She died there on 7th June 1337, the last of her father’s line. She was never allowed to speak, hear or learn her native language.
Eleanor de Montfort was the first woman known to have used the title Princess of Wales. She was buried alongside her aunt Joan, illegitimate daughter of King John and wife of Llewelyn the Great, at Llanfaes on the Isle of Anglesey.

References:
Sources: castlewales.com; snowdoniaheritage.info; Marc Morris A Great and Terrible King;David Williamson Brewer’s British royalty; Mike Ashley The Mammoth Book of British kings & Queens; Alison Weir Britain’s Royal Families; Roy Strong The Story of Britain; Dan Jones The Plantagenets; the Kings who Made England; Chronicles of the Age of Chivalry Edited by Elizabeth Hallam; The Oxford Companion to British History; The History Today Companion to British History; Derek Wilson The Plantagenets.
Pictures taken from Wikipedia, except that of Edward I, Alexander III and Llewelyn, which was taken from castlewales.com. 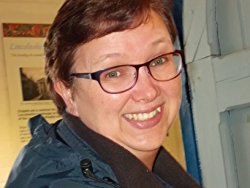 Sharon Bennett Connolly, has been fascinated by history for over 30 years now. She has studied history academically and just for fun – and even worked as a tour guide at historical sites, including Conisbrough Castle.

Born in Yorkshire, she studied at University in Northampton before working in Customer Service roles at Disneyland in Paris and Eurostar in London.

She is now having great fun, passing on her love of the past to her son, hunting dragons through Medieval castles or exploring the hidden alcoves of Tudor Manor Houses.

For Christmas 2014, her husband gave her her very own blog – History ... the Interesting Bits allowing her to indulge in that love of history. Sharon started researching and writing about the lesser-known stories and people from European history, the stories that have always fascinated. Quite by accident, she started focusing on medieval women. And in 2016 she was given the opportunity to write her first non-fiction book, Heroines of the Medieval World, which will be published by Amberley in September 2017.


Heroines of the Medieval World 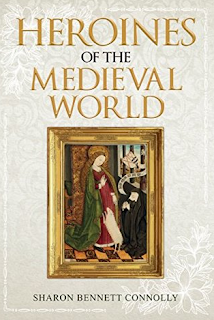 These are the stories of women, famous, infamous and unknown, who shaped the course of medieval history. The lives and actions of medieval women were restricted by the men who ruled the homes, countries and world they lived in. It was men who fought wars, made laws and dictated religious doctrine. It was men who were taught to read, trained to rule and expected to fight.

Today, it is easy to think that all women from this era were downtrodden, retiring and obedient housewives, whose sole purpose was to give birth to children (preferably boys) and serve their husbands. Heroines of the Medieval World looks at the lives of the women who broke the mould: those who defied social norms and made their own future, consequently changing lives, society and even the course of history.

Some of the women are famous, such as Eleanor of Aquitaine, who was not only a duchess in her own right but also Queen Consort of France through her first marriage and Queen Consort of England through her second, in addition to being a crusader and a rebel. Then there are the more obscure but no less remarkable figures such as Nicholaa de la Haye, who defended Lincoln Castle in the name of King John, and Maud de Braose, who spoke out against the same king’s excesses and whose death (or murder) was the inspiration for a clause in Magna Carta.


Women had to walk a fine line in the Middle Ages, but many learned to survive – even flourish – in this male-dominated world. Some led armies, while others made their influence felt in more subtle ways, but all made a contribution to their era and should be remembered for daring to defy and lead in a world that demanded they obey and follow.