Today we are celebrating the release of Amy Rose Bennett's new book. Amy is one of my favourite Historical Romance authors. I can't wait to get between the covers of her latest story!

The Laird of Blackloch:
Book 2 in the Highland Rogue Series

Revenge might be sweet, but love is far sweeter...

Following the Battle of Culloden, Alexander MacIvor returns to his ancestral home, Blackloch Castle, only to find the Earl of Tay, chief of the rival Clan Campbell, has laid waste to everything he holds dear. In the face of such devastation, Alex seems doomed to live the life of a fugitive Jacobite ... until a stroke of good luck allows him to escape the Highlands and begin again.

Years later, styling himself as a wealthy Englishman, Alexander reclaims his forfeited estate, becoming the new Laird of Blackloch. But it’s not nearly enough to quench his thirst for vengeance. Hell-bent on destroying Lord Tay, he single-mindedly sets about driving his nemesis to bankruptcy. When he learns the earl intends to marry the very beautiful English heiress, Miss Sarah Lambert, thus escaping penury, he devises a devious plan: kidnap Miss Lambert and ransom her to hasten Tay’s ruin.

When Sarah Lambert learns Lord Tay is not the man she thought he was during a masquerade ball in Edinburgh, she is devastated. Reeling from her discovery, things go from bad to worse when a mysterious yet charming guest by the name of Alexander Black turns out to be a true devil in disguise. Abducted and whisked way into the wild Highlands by Black, Sarah is imprisoned in a remote, island-bound tower. Refusing to be a pawn in Black’s diabolical plan for revenge, she determines that somehow, some way, she will regain her freedom. If only she could unlock Black’s secrets ...

Living in such close quarters, Alexander quickly discovers the spirited Sarah is more than a match for him, and even the best laid plans can go awry when passion flares and the spark of love threatens to revive his long-dead heart. When the shadows of the past begin to gather, will Alexander and Sarah find their way forward ... or will the threatening darkness destroy them both? 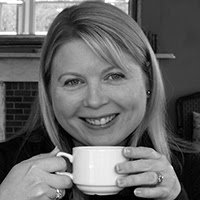 Amy is happily married to her own Alpha male hero, has two beautiful daughters, and a rather loopy Rhodesian Ridgeback. She has been a speech pathologist for many years but is currently devoting her time to her one other true calling—writing romance.