I’ve never thought of myself as someone who is particularly spontaneous, who acts on impulse or has an idea and runs with it with hardly a thought as to the consequences. Not until recently, anyway. Now I’m beginning to wonder. Have I perhaps been spending too much time with one of the leading characters in my books?
That character is Matthew Wansford – erstwhile page to Duke Richard of Gloucester (later Richard III, sometimes himself seen as prone to impulses, perhaps never more so than towards the end of his final, fateful battle). Several times in the two books, Matthew has acted in that way, without thinking – with nary a thought for what trouble he might get himself into if he ... well, launches a pre-emptive attack on someone much bigger than him, for example. For a twelve- or fifteen-year-old, perhaps it’s not surprising – but at my age? Surely the time to be impulsive has long passed. Even Matthew, having reached the more mature age of sixteen in my work-in-progress, seems to think a little more before he acts.
But, to be honest, this past year or so has given me a new lease of life – since taking the plunge to publish my first book, The Order of the White Boar, in October 2017, and forge what has effectively become a new career. I’ve lost count now of the number of times since then that I’ve cheerfully headed off outside my comfort zone – from navigating the arcane processes of Amazon’s self-publishing systems, to giving a reading of my own work in front of fifty complete strangers and being interviewed in front of a ‘live studio audience’ for a podcast. So maybe it’s not so strange that I’ve become a little more spontaneous from time to time.

Would I call in to Middleham Castle at a couple of days’ notice to cut the cake for King Richard at his 566th birthday party? Of course! Will I dress as a medieval page to give a talk to sixty schoolchildren? Why not? What about compiling an anthology of short fiction by a dozen international authors and publishing it in time for Christmas with proceeds going to charity? Hell, yes – when do I start?
OK, that wasn’t a suggestion made to me, and to be honest, the idea had been sitting somewhere towards the rear of my brain for a while. Since I’d raised a few pounds for the charity Scoliosis Association UK (SAUK) through selling a short story online – a ghost story with a Richard III theme, that also featured a young impulsive lad, himself recently diagnosed with scoliosis... And then mentioned it to Wendy Johnson (of the Looking For Richard Project), herself a very talented writer, who told me she had also written a Ricardian short story or two. Two or three short stories on a theme? That’s the makings of an anthology, I joked!

But it was several months later, after a particularly energizing library talk when the subsequent discussion about King Richard went on a good hour after the intended time, that the idea resurfaced. And there were three months to go before Christmas – plenty of time to pull something together.
Looking back it was probably total madness – the idea that anyone would want to contribute stories to such a tentative project by a newbie author, let alone in such a short time. Yet to my amazement, when I sent out a few feelers to other Ricardian authors I knew, or knew of, through Facebook and Twitter, every one of them said yes. Two also said ‘I know someone else who might contribute’ and ‘I think I know who could do the cover’, and another author I’d met briefly at a signing also got wind of the project and asked if she could join in. Suddenly I had fifteen pieces of short fiction generously promised by twelve different authors, from the UK, Ireland, the USA and Australia, several to be written specially – sufficient to make up a small collection that would be an ideal stocking filler – if it could be made ready in time for Christmas...

So what was, one moment, just an impulsive idea became, within twenty-four hours, a definite plan. A plan for which eleven other authors were busy creating new tales, redrafting existing ones and, in a couple of cases, editing extracts from their novels to act as standalone pieces.
Of course, as many another author will realize, all this was probably just another excuse for me to prevaricate over my work-in-progress...
To cut short what will otherwise become a longer story than many in the anthology, thanks to the sterling efforts of my fellow contributors, we somehow managed to produce in good time before Christmas what has since been described by reviewers as ‘a highly entertaining read’, ‘a wonderful variety of stories’ with ‘a little something for everyone’, and ‘a rainbow of emotion and adventure’. And sales have already raised several hundred pounds for SAUK – chosen as the recipient charity because King Richard himself had scoliosis, as was revealed when his grave was rediscovered in 2012.


Oh, and another couple of impulsive actions led to some celebrity input. What should the title be? My sister suggested a line from poet-laureate Carol Ann Duffy’s poem ‘Richard’, read by Benedict Cumberbatch at the king’s reburial in 2015 – ‘though I suppose you’d need permission’, she said. No problem – why don’t I fire off an email just on the off-chance? Within twelve hours the permission was given to entitle the anthology Grant Me the Carving of My Name. And how about asking a multi-million-selling historical novelist to provide a foreword? It’s worth a shot! And who better than Philippa Gregory, whose The White Queen, dramatized on the BBC in 2013, offers one of the few positive mainstream portrayals of King Richard?

As Philippa writes in her Foreword, ‘This collection has come about – as so many good things do – from a dream and a joke.’ My story did in fact come about as a result of a between-sleeping-and-waking dream, but she could have said just as accurately ‘a joke and an impulse’. And it’s an impulse I’ve not regretted for an instant.* 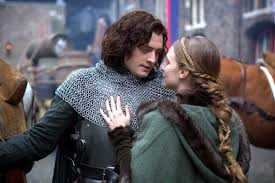 (*That’s so much the case, that plans are afoot to do it all again in 2019. Narrelle Harris wasn’t the only author to contact me about contributing a story after she heard about the anthology. After the line-up was finalized and the project announced, I had to regretfully say no to approaches from at least as many potential contributors as those I had initially asked. So a call for contributions to a second anthology will be appearing on my blog and Facebook page in a couple of months or so – allowing rather more time to compile it before Christmas this time, assuming enough authors are still interested. If you think you might be one, do keep an eye out...)

Grant Me The Carving Of My Name 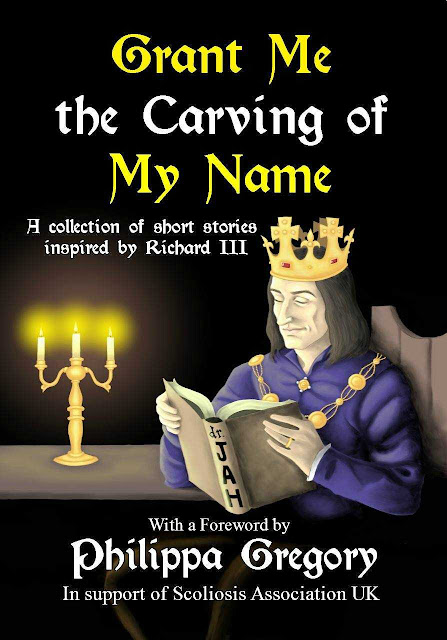 A boyhood mishap in York. A ghostly walking tour of Leicester. A deadly snowstorm on the moors above Middleham. Alien abduction in the very heart of the city of London. Loss of a beloved brother, death of an untrue cousin.
Just some of the events recounted in these tales by authors inspired by King Richard III.
Much-maligned since his death, the real man has often been lost in the shadow of the scheming villain of Shakespeare’s famous play. Following the rediscovery of his centuries-lost grave in 2012, many people have come to question this evil reputation, and King Richard’s supporters (known as Ricardians) are seizing the chance to bring his real history to a wider audience. The authors collected here have all, in their different ways, sought to cast a light on that story.
Elegiac, mystical, brutal, light-hearted, uplifting. Will you find your new favourite author within the pages of this anthology?
Sold in support of Scoliosis Association UK (SAUK) with a Foreword by Philippa Gregory (The White Queen) and edited by Alex Marchant
With contributions from:
Narrelle M. Harris  • Wendy Johnson  • Susan Lamb  •  Joanne R. Larner  • Matthew Lewis • Máire Martello •  Frances Quinn  • J. P. Reedman • Marla Skidmore •  Richard Unwin • Jennifer C. Wilson

Grant Me the Carving of My Name is available through Amazon at mybook.to/GrantMetheCarving or direct from Alex.

The Order of the White Boar 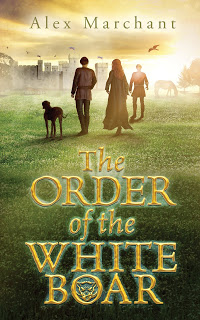 How well do you know the story of King Richard III? Not as well as Matthew Wansford.
Twelve-year-old Matthew Wansford has always longed to be a knight. And his chance comes in the golden summer of 1482 when he arrives at Middleham Castle, to serve the King’s brother, Richard, Duke of Gloucester.
Soon he encounters a dangerous enemy. Hugh, a fellow page, is a better swordsman, horseman, more skilled in all the knightly arts – and the son of an executed traitor. Now he aims to make Matt's life hell.
Yet Matt also finds the most steadfast of friends – Alys, Roger and Edward, the Duke’s only son. Together they forge a secret knightly fellowship, the Order of the White Boar, and swear an oath of lifelong loyalty – to each other and to their good lord, Duke Richard.
But these are not times to play at war. Soon Matt and his friends will be plunged into the deadly games of the Wars of the Roses. Will their loyalty be tested as the storm looms on the horizon? 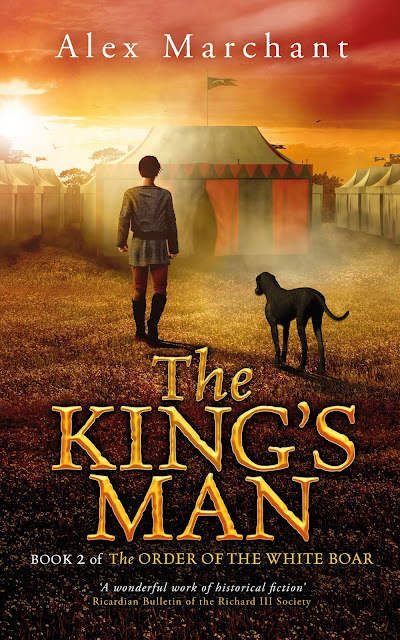 How well do you know the story of the real King Richard III?
It's April 1483, and the death of his brother King Edward IV has turned the life of Richard, Duke of Gloucester upside down, and with it that of his 13-year-old page Matthew Wansford.
Banished from Middleham Castle and his friends, Matt must make a new life for himself alone in London. But danger and intrigue lie in wait on the road as he rides south with Duke Richard to meet the new boy king, Edward V – and new challenges and old enemies confront them in the city.
As the Year of the Three Kings unfolds – and plots, rebellions, rumours, death and battles come fast one upon the other – Matt must decide where his loyalties lie.
What will the future bring for him, his friends and his much-loved master? And can Matt and the Order of the White Boar heed their King’s call on the day of his greatest need?
The King’s Man, the eagerly awaited sequel to The Order of the White Boar, continues the story of Richard Plantagenet for readers aged 10 to 110

Amazon US Amazon UK
Alex Marchant
Born and raised in the rolling Surrey downs, and following stints as an archaeologist and in publishing in London and Gloucester, Alex now lives surrounded by moors in King Richard III’s northern heartland, working as a freelance copyeditor, proofreader and, more recently, independent author of books for children aged 10+.
Posted by Mary Anne Yarde at 07:00