Like many of us, I first learned of Richard II from Shakespeare. Even though I knew nothing about him, I was totally moved during the prison scene while he bemoaned the fate of kings—and I never recovered! But his story goes way beyond the events of this play; in fact, Shakespeare only covered the last year of Richard’s life. He tells us nothing about what led up to the famous scene between Bolingbroke and Mowbray, where their trial by combat was interrupted and they were sent into exile. This was indeed the crisis that led to the king's downfall, but Richard's story is much more complicated than you would ever think from watching the play.


First of all, did you realize that Henry of Bolingbroke was Richard's first cousin? The clues are all there but it's not easy to put them together. The old John of Gaunt ("This blessed plot, this earth, this realm, this England...") was the eldest of Richard's surviving uncles, and because Richard was childless he was next in line to the throne (debatable, but that's another story). Bolingbroke, Gaunt's eldest son, was next after him. This did not appeal to Richard; in fact, according to all reports, having Bolingbroke as his heir was anathema. Why? Events in my book, A KING UNDER SIEGE, will give you a good idea. Richard and Henry were never friendly, but during the second crisis in Richard's reign, Bolingbroke was one of the Lords Appellant—the five barons who drove the Merciless Parliament to murder the king's loyal followers.


The five appellants before the king. Source: Wikimedia
Richard's minority was not easy. The doddering Edward III was hardly a role model, and neither was his father, the ailing Black Prince who languished for years, disabled and debilitated. On Edward III's death, Parliament insisted on Richard's coronation instead of a regency; many feared that John of Gaunt would seize the throne. Nonetheless, what could one expect from a ten year-old? Four years later, the boy king proved himself worthy during the Peasants' Revolt, but his subsequent attempts to assert himself led to conflict with his magnates. His bad temper, sharp tongue, and impetuous nature gave the restive barons plenty of excuses to hold him down. Richard's solution was to surround himself with cooperative friends and advisors and exclude the self-righteous lords from his inner circle, which infuriated them. The king needed proper guidance, they insisted; his household needed purging.
The Lords Appellant, as they came to be known, threatened Richard with abdication—humiliating him and destroying his power base. At first there were three of them: Richard's uncle Thomas Duke of Gloucester, Thomas Beauchamp Earl of Warwick, and Richard FitzAlan Earl of Arundel.  After Richard's aborted attempt to raise an army in defense, Henry of Bolingbroke and Thomas Mowbray joined their ranks—the same who challenged each other in Shakespeare's play.


So you can see that Shakespeare's trial by combat had a lot more going on than could easily be explained. Richard may have appeared detached while he observed the quarrel between Bolingbroke and Mowbray, but under his regal bearing he must have been shivering with glee. The altercation between these two knights was actually the result of their involvement in the Merciless Parliament. A year before the play took place, Richard had already succeeded in wreaking revenge on the original three Appellants. Mowbray feared that their turn was next, and when he voiced his concerns to Bolingbroke, the latter tried to save his skin by telling the king. The argument escalated from there, giving Richard the perfect opportunity to get rid of both of them. He made his fatal error when he went too far and deprived Bolingbroke of his inheritance.
Shakespeare gave us the poignancy of Richard's last days. Historians have left us more of a conundrum which may never be sorted out. Richard's 22-year reign can be divided into two parts: the 12 years of his minority and the ten years of his majority—each of which are brought to a tragic climax. Hence, it will take two books to cover his story. As you might guess, volume two will be called THE KING'S RETRIBUTION.

A King Under Siege
Book 1 of The Plantagenet Legacy 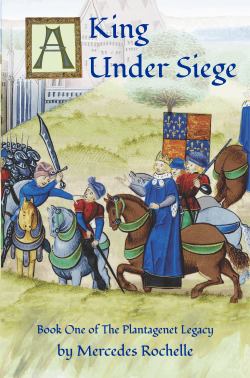 Richard II found himself under siege not once, but twice in his minority. Crowned king at age ten, he was only fourteen when the Peasants' Revolt terrorized London. But he proved himself every bit the Plantagenet successor, facing Wat Tyler and the rebels when all seemed lost. Alas, his triumph was short-lived, and for the next ten years he struggled to assert himself against his uncles and increasingly hostile nobles. Just like in the days of his great-grandfather Edward II, vengeful magnates strove to separate him from his friends and advisors, and even threatened to depose him if he refused to do their bidding. The Lords Appellant, as they came to be known, purged the royal household with the help of the Merciless Parliament. They murdered his closest allies, leaving the King alone and defenseless. He would never forget his humiliation at the hands of his subjects. Richard's inability to protect his adherents would haunt him for the rest of his life, and he vowed that next time, retribution would be his.

Ten thousand or more crowded the banks of the Thames near the King's manor of Rotherhithe, shrieking and howling like the demons of hell. The royal barge, hung with the Plantagenet lions, floated safely in the middle of the river, while King Richard gripped his sword, trying to emulate his royal forefathers. His elders would agree that the fourteen year-old monarch looked every bit the Plantagenet successor; he was tall for his age, with delicate features and red hair like his father. Richard was born to be king and now he must prove it—though at the moment he felt more like a lamb than a lion.
He waited for the frenzy to exhaust itself. "Why are you here and what do you want?" The young voice, clear and shrill, reached its listeners who broke out once again into a clamor, shaking their farm tools and rusty old blades.
"Come to the shore!" One voice carried over the din. "Speak with us in person!"
Standing under a large red canopy with his counsellors, Richard glanced upriver at the four smaller barges serving as his escort. The boats had hung back, not daring to come any closer. This was a sorry plight his advisors had led them into! Sighing, Richard turned to Archbishop Sudbury; he could see the terror in the prelate's face. This wasn't helping.
"I p-promised I would speak with them," the King said uncertainly. "I must at least try."
Bristling under two great banners with St. George's cross and forty pennons, the mob continued its uproar while the King turned to his other advisors. Sir Robert Hales, England's treasurer, stepped up beside the archbishop. "We can't expect any mercy from them. They are out for blood." Richard frowned, dissatisfied. Hales might be Lord Grand Prior of the Knights Hospitaller, but today his courage seemed to have fled. The man's eyes were almost bulging from his head.
Richard then turned to the Earl of Salisbury, the most experienced soldier on the barge. "And what is your advice?" he asked, trying to keep a brave face.
"You cannot go ashore. They might restrain you—hold you hostage, or worse. This is an undisciplined rabble."
This was the best counsel they could give him? He had to do something, though his advisors would probably criticize him for making the wrong choice—with the utmost courtesy, of course, and polite language. Taking a deep breath, Richard turned back to the crowd. He hoped he could control his stutter. "What is it you want from me?" he shouted. "Tell me, now that I have come this far."
He stood, arms crossed, while the men closest to the river conferred with each other. Finally, coming to a decision, the apparent leader got into a boat with a couple of rowers. They brought their craft as close as they dared. "Here is what we want," the man called. "We demand the heads of John of Gaunt, Archbishop Sudbury, Treasurer Hales, Chief Justice Robert Belknap, Robert Plesington Baron of the Exchequer, John Legge and Thomas Brampton."
"Why, you seek to deprive me of my chief ministers," Richard cried. Behind him, he could hear Sudbury calling down God's curses on their heads.
"We seek to save you from corrupt officials," the rebel shouted back.
"By killing them all? How would that help me?"
"They are destroying the country with their dishonest administration."
"This is too dangerous," Salisbury spoke in Richard's ear. "We must leave."
Nodding in agreement, the King tried one last time. "If you wish to continue negotiations," he called, less sure of himself, "you may do so at Windsor on Monday next." While he was speaking, the barge was already turning around. Stunned at losing their advantage, the crowd howled in anger and the rebel boat fell back in confusion. But Richard no longer cared. He was headed for the safety of the Tower, though for the first few minutes they were at the mercy of any archer who might choose to draw his bow. Fortunately, nothing happened aside from the shouts of "Treason! Treason!" that diminished as they gained speed.
The King stared at the receding mob, biting his lip, until they were out of range. He had never felt so alone. This debacle was not of his making, yet everyone was looking to him for a solution. It just wasn't fair. Even though he had been king for four years, he was in leading reins just as assuredly as any young horse. He sat in council meetings—even presided at Parliament—but his opinions were politely dismissed. They said he was too young, too inexperienced to make decisions. He was expected to watch and learn while his chief ministers made a mess of things. Well, they certainly taught him what not to do! And now, with half the country in an uproar, all they could do was dither. No one had taken the rising seriously enough to gather a force to confront the rebels, and now that the angry multitude was at the gates of London, no one had a suggestion what to do about it. Obviously, this attempt had failed disastrously. But at least he had tried. 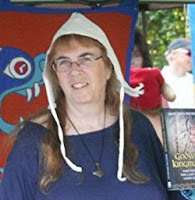 Born in St. Louis MO with a degree from University of Missouri, Mercedes Rochelle learned about living history as a re-enactor and has been enamored with historical fiction ever since. A move to New York to do research and two careers ensued, but writing fiction remains her primary vocation. She lives in Sergeantsville, NJ with her husband in a log home they had built themselves.
Mercedes loves to hear from readers. You can find her: Website • Blog •Facebook • Twitter.
Posted by Mary Anne Yarde at 07:00