Actor and author, Clive Mantle, is talking about that “notorious second novel.” There is also a chance to check out Clive’s fabulous new book — A Jewel in the Sands of Time #AncientEgypt #TimeTravel #GameofThrones @MantleClive 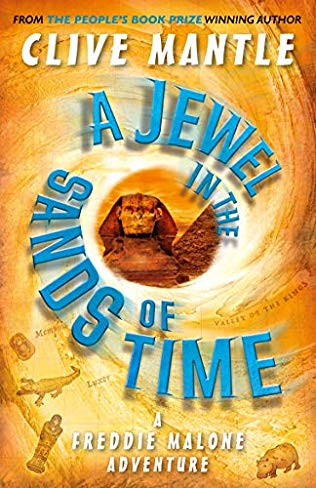 Thanks to his Uncle Patrick s mysterious map, Freddie is about to embark on another incredible adventure through time except this time, he's not alone. Join Freddie and best friend, Connor, as a feisty new neighbour, Ruby, threatens to disrupt the boys plans...

Clive Mantle brings all the drama of his TV, film and stage career to the second in a thrilling series of incredible time-travel adventures.

I’ve been very lucky and suffered few nerves writing my second book. The pressure was always there, as the reaction to ‘Treasure’ was so positive. I was always gunning for a standard below which I knew I must not drop, but I planned more thoroughly and researched in great depth, and most importantly laid out the chapters and the adventures progression far more professionally than before.

When I occasionally ‘research dumped’ my agent was very clear in her instructions. It’s an adventure set in an amazing historical period, not a 272 page book showing us how much you’ve read about Egypt. Enough said.

Luckily by the time ‘Treasure’ had won the ‘Peoples Book Prize 2019’, ‘Jewel’ had been with my publishers for 4 months, and the final tinkering and proof reading, layouts, trims and polishes were all that remained. So that helped a great deal. I was never sat contemplating a blank page thinking, ‘Oh No! What shall I write? How do I follow that?’

I am very lucky that I really like my characters, including a feisty new addition called Ruby, who is a major force to be reckoned with. The ability to place them anywhere and at anytime in History is a glorious luxury. I’m not confined to the present, although about a quarter of the books are set in the 21st century. It is a formula that I’m pleased to continue and a very handy device to compare their present day experience with their existence placed in another ‘Time’, contrasting the pressures of modern day life and all that brings, with life as it was.

In ‘Jewel’ we travel to ancient Egypt in two bursts. Firstly to 1328 BC, midway through the short 10 year reign of King Tutankhamun, and secondly to 1125 BC. Here, Ramesses 1X is pharaoh, and the Egypt Freddie finds 203 years later is very different from before.
Again, Freddie, Connor and now Ruby, are faced with a world of wonder, but also intrigue and danger, as the reason for Freddie’s adventure becomes clear. He is always called to champion someone not best placed to help themselves, and through his actions he becomes an integral and loyal friend to the young pharaoh and his wife Ankhasenamun. 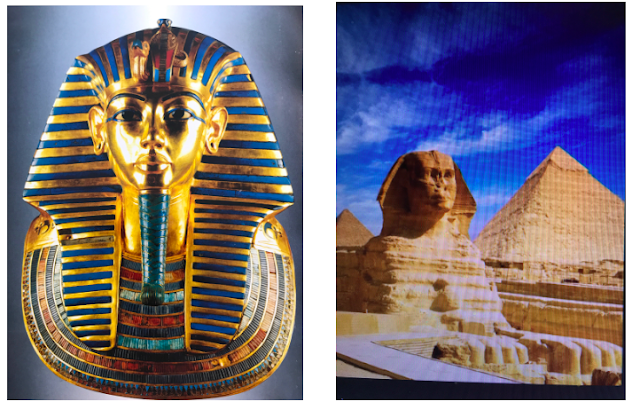 Pyramids, temples, tombs, power struggles, goodies, baddies, golden chariots, crocodiles, plots uncovered, rescues, riots survived, and fiercely forged loyal friendships are the backdrop to maybe the first Nile tourist cruise ever! Hopefully I’ve placed the reader deep in amongst Egyptian society and they will emerge with a strong sense of life as it felt, tasted and smelt.

We travel through the Egyptian seasons as well as the centuries, as ‘Ahket’, the ‘Inundation’, raises the water level of the Nile 35 feet at Waset [modern day Thebes] then the most populous and powerful city in the world. Karnak is close by, still to this day the largest religious structure ever built.

‘Jewel’ is set in two main Egyptian locations. In and around the Valley of the Kings, and then some 400 kilometres north up the River Nile to the Great Pyramid and Sphinx complex at Giza.

Immersing myself in all things ancient Egyptian was a real pleasure. It is such a vast and glorious period, spanning three and a half thousand years. It is a complicated process picking a spot to land on with a story.

But the one person that young and old want to know about, is Tutankhamun.

I read two complete histories of all the dynasties to make sure I wasn’t missing someone or something more interesting, and as amazing as the whole period is, I was inevitably drawn back to the golden Boy King.

His Tomb plays a large part in the book and I feel like I know where each of the 5000 relics and precious possessions were laid to rest with the king. But it’s the simple things almost that touch me most. The positioning of the statue of Anubis – in the form of a reclining hound, as near to the foot of the sarcophagus as possible, maybe echoing the loyalty shown to Tutankhamun by his own Tesum hunting dog called Dedu. Did Ankhasenamun command it to be placed there as close to its royal master as possible? 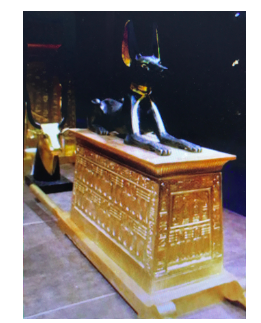 On the West wall of the Burial chamber, the wonderful depiction of the Solar barque on it’s journey towards Osiris, and underneath the 12 baboons each marking an hour of the night through which the world travelled until the rebirth of the God Amun as the sun rose again. 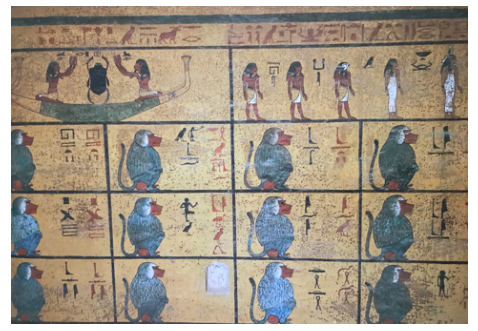 The position of the Scarab in Egyptian society was highly respected. The example of the dung beetle pushing its burden ever onward, was seen as displaying the great qualities of diligence and perseverance. The tiny insect was often celebrated in the form of jewelry and paintings, and I have placed one at the heart of my book. 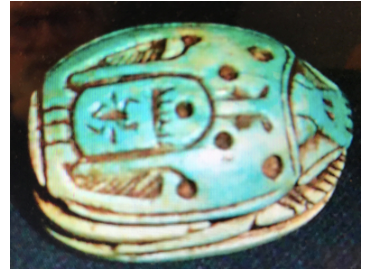 It is now thought that he suffered from Temporal lobe Epilepsy. He certainly had a club foot and cleft palate from birth, but the previously held theory that a mark on a neck vertebrae thought to suggest foulplay, has now been marginalized as his possible cause of death. More likely is the far more mundane – Septicaemia – resulting from a badly broken leg, which ended his 10 year reign at the tender age of 19.

He had fathered two children by then, but neither had survived beyond birth. Ankhasenamun was more than likely his half sister, and so the disastrous policy of the royal family inter marrying continued. Little did they realize that the process severely weakened any offspring. The short reigns of most pharaohs would have been dramatically extended had they married into outside families and different blood lines, rejuvenating the health and longevity of the royal line. 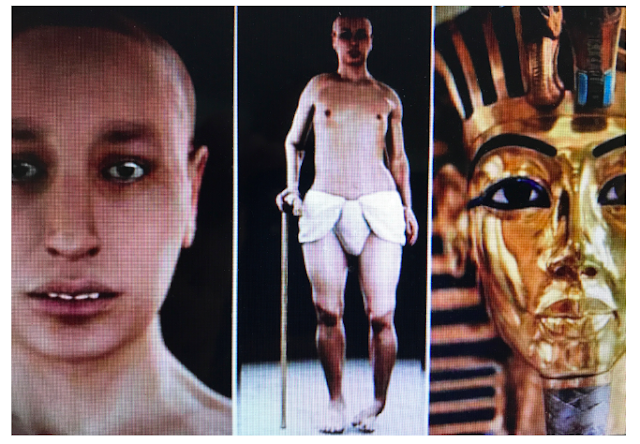 Ankhasenamun was six years older than Tutankhamun, and after his death and against her will, she was forced to marry Ay - who succeeded the Boy King. Ay had been one of his joint Viziers, like prime ministers, along with Horemheb who controlled the Army.

On Tutankhamun’s death, Ankhasenamun pleaded by letter to the Hittite King to send one of his sons for her to marry, which he did. But Prince Zannanza was murdered on his way to Egypt. With facts like these to provide a secure backbone, it is exciting to then imagine the intrigue and plots, the loyalties and double dealings, and whilst never altering History in any way, provide a realistic glimpse of what the state of play was.

To me, Kha and Ankha [as I call them] were like ornate trapped birds in a golden cage. Gilded and bejewelled, but powerless, friendless and vulnerable…

So that’s how I’ve spent the majority of the last year, and now my attention turns to all things London and 1665 and 1666. More of that another time. Safe to say it’s just as fascinating to research, and just as much fun to write.

I will be recording the Audiobook of ‘Jewel’ soon, to accompany ‘Treasure’ which is already available either through Amazon or from ‘Oakhill’ directly. 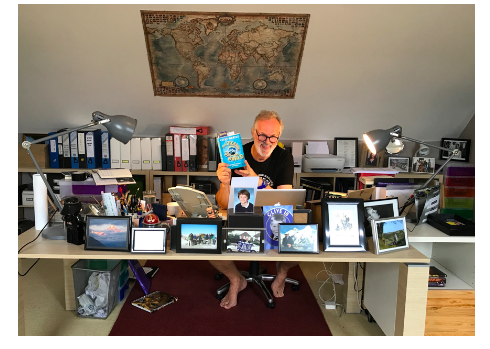 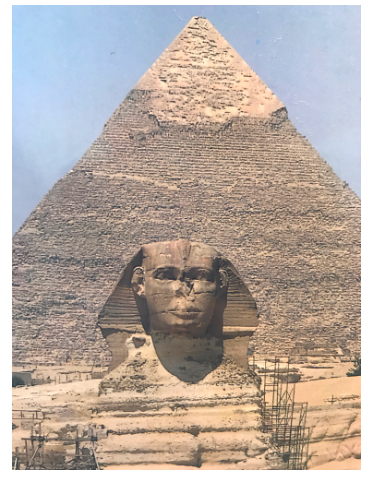 Thank you to all those who have bought the books so far, and those who voted in the Peoples Book Prize 2019. Your support is very much appreciated. Xc.

A Jewel in the Sand of Time
Prologue

In a cold, dark basement, a long way from where you are reading these words, the Collector sat at his writing table inspecting a huge yellow gemstone under a solitary light. The elderly man scrawled on a piece of folded white card, using a quill dipped in a vivid turquoise ink.

And many years ago, in a silent and ancient tomb, also a long way from where you are reading these words, there lay a King in his dark resting place. A long dead Boy King who was always at the mercy of those who would seek to possess his impossible wealth.
Close by the King, a precious jeweled trinket guarded the Pharaoh through the twelve stages of night on his journey to the next life.

The Collector wanted to turn back time and steal the priceless artifact for himself and deny the joy of its discovery to the rest of the world. He also craved a precious liquid, a legendary medicine, which if taken would prolong his life - the seconds, minutes and hours of which were trickling through his twisted fingers like fine desert sand as he neared his worldly end. He calculated that the two treasures could easily be collected together, or so he hoped.

Around him in the large basement were dozens of illuminated cabinets containing many of the world’s missing wonders, which he had acquired by one foul means or another. He moved towards the furthest display, stroking the glass of several others as he passed.

Even now, after all these years, there was still room for a treasure yet to be stolen. He unlocked the door of the last cabinet and with a shaky hand smoothed the velvet interior.

On it he placed the huge yellow ‘Florentine Diamond’, tinkering with its position until he was satisfied that it caught the available light. Almost immediately his eyes moved from the priceless gemstone to the empty expanse to its right. He lovingly stroked the velvet cloth and whispered,

“Of course, be patient. Not long now. You will soon have
a treasure.” 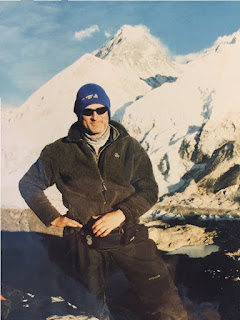 Clive Mantle is a much-loved British actor, a star of both stage and screen for over 40 years. He is perhaps best known for playing Little John in Robin of Sherwood, Great Jon Umber in Game of Thrones, Simon Horton in The Vicar of Dibley and Mike Barratt in Casualty. His voice is also well known from his work on over 180 audio books, and voicing animated characters, including Gator in Thomas the Tank Engine...

...And, he is now a published Author.