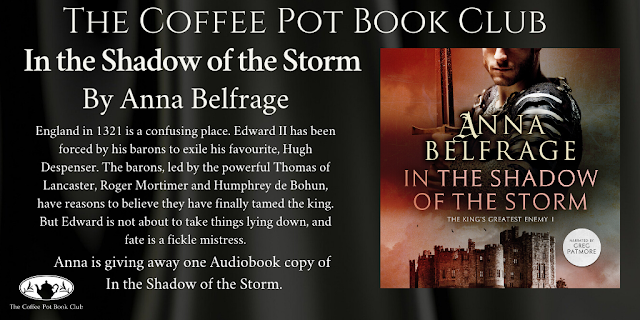 In the Shadow of the Storm
By Anna Belfrage 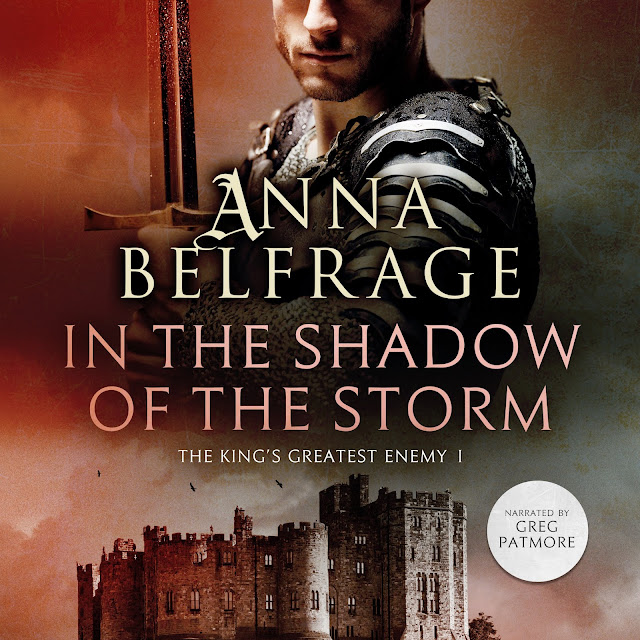 Adam de Guirande owes his lord, Roger Mortimer, much more than loyalty. He owes Lord Roger for his life and all his worldly goods, he owes him for his beautiful wife – even if Kit is not quite the woman Lord Roger thinks she is. So when Lord Roger rises in rebellion against the king, Adam has no choice but to ride with him – no matter what the ultimate cost may be.
England in 1321 is a confusing place. Edward II has been forced by his barons to exile his favourite, Hugh Despenser. The barons, led by the powerful Thomas of Lancaster, Roger Mortimer and Humphrey de Bohun, have reasons to believe they have finally tamed the king. But Edward is not about to take things lying down, and fate is a fickle mistress.
Adam fears his lord has over-reached, but at present Adam has other matters to concern him, first and foremost his new wife, Katherine de Monmouth. His bride comes surrounded by rumours concerning her and Lord Roger, and he hates it when his brother snickers and whispers of used goods.
Kit Courcy has the misfortune of being a perfect double of Katherine de Monmouth – which is why she finds herself coerced into wedding a man under a false name. What will Adam do when he finds out he has been duped?
Domestic matters become irrelevant when the king sets out to punish his rebellious barons. The Welsh Marches explode into war, and soon Lord Roger and his men are fighting for their very lives. When hope splutters and dies, when death seems inevitable, it falls to Kit to save her man – if she can.

Anna says: “During 2019, I had the pleasure of working closely with Greg Patmore to convert my book babies into audiobooks. Greg is an extremely talented narrator—but I quickly came to understand that a good narrator is also something of a creator. After all, Greg does his own interpretation of the characters, weaving his voice into mine, so to speak.”
Find out more about Greg Patmore on his website.

***
Anna is giving away one Audiobook copy of In the Shadow of the Storm.
To enter the giveaway, leave a comment below!
***

In the Shadow of the Storm in audio format is available on:
Audible • Amazon • Downpour • GooglePlay • Kobo. 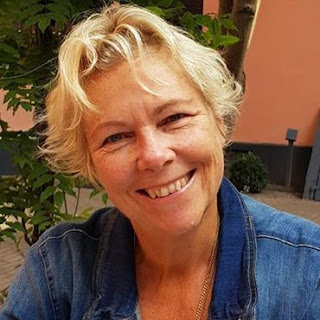 Anna Belfrage combines an exciting day-job as a board of director in various listed companies with her writing endeavours. When she isn’t writing a novel, she is probably working on a post or catching up on her reading. Other than work and writing, Anna finds time to bake and drink copious amounts of tea, preferably with a chocolaty nibble on the side. And yes, now and then she is known to visit a gym as a consequence…
Find out more about Anna by visiting her website, www.annabelfrage.com or her Amazon page. You can also find her on Facebook or Twitter.