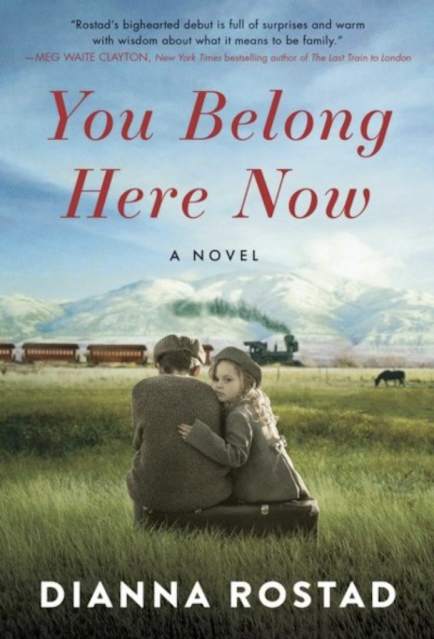 Publication Date: April 6, 2021
Publisher: William Morrow
Page Length: 339 Pages
Genre: Historical Fiction
In 1925, three brave kids from New York board the orphan train headed west. An Irish boy who lost his whole family to Spanish flu, a tiny girl who won’t talk, and a volatile young man who desperately needs to escape Hell’s Kitchen. These kids are paraded on platforms across the Midwest to work-worn folks and journey countless miles, racing the sun westward. Before they reach the last rejection and stop, the kids come up with a daring plan, and set off toward the Yellowstone River and grassy mountains where the wild horses roam. Fate guides them toward the ranch of a family stricken by loss, but the children are unable to outrun their dark pasts in New York, and to save them, the family must do the unthinkable.

Hello, I’m Dianna Rostad. I’m going to share with you the history and inspiration for my novel: You Belong Here Now. You’ll learn about the orphan trains, life in 1920s Montana, and wild horses. But first, here are some great reviews!

“You Belong Here Now is a novel as straightforward and powerful as the characters who populate it. I love this book and I guarantee you won’t find a finer debut work anywhere.”

“You Belong Here Now distills the essence of the American spirit in this uplifting story. Perfect for book clubs looking to discuss the true meaning of family.”

“A sweeping, atmospheric story set in Montana. Dianna Rostad has penned a heart-warming, epic story built on the premise of a search for belonging that reads as an odyssey in all that it takes to find the heart of one’s family.”

When I first discovered the history of the orphan trains, I felt a special kinship to the street kids from 1920s New York. You see, after the riots in the 1990s, I worked with a similar group of kids in South Central Los Angeles. So, when I saw the pictures of these orphans on old steam trains, I recognized that look of determination and hope, and their stories began to take root in my heart.

I researched this fascinating adoption phenomena with a passion, and learned the trains ran for 76 years, between 1853 and 1929. There were many catalysts to this, and the most interesting was the building of the railroad itself! In the mid-19th century, the United States began surveying railroad lines to the Pacific, but they needed people to go West, otherwise, why build it? Posters and flyers were sent to Europe and the rest of the world to advertise free land. Imagine over 4mm folks boarding steamships and coming to the Eastern seaboard and how crowded our cities became. 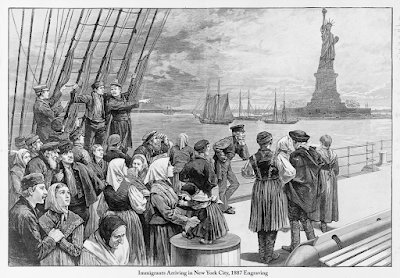 People were often jammed ten to a room, food became scarce, and young children were forced to work. All these dire conditions led people to abandon their children on doorsteps of the wealthy, churches, and finally to the growing institutions such as the New York Foundling Hospital.

It’s estimated that 30,000 children at one time were homeless in New York. It wasn’t long before these kids had gangs of their own, filching food, sleeping in alleys, and banding together to survive.

In 1853, a little-known Methodist minister, Charles Loring Brace and a group of businessmen formed The Children’s Aid Society. This society ran orphanages, lodgings for Newsies, but what the society is most famous for, is the idea of sending children out to the farms and ranches on orphan trains. 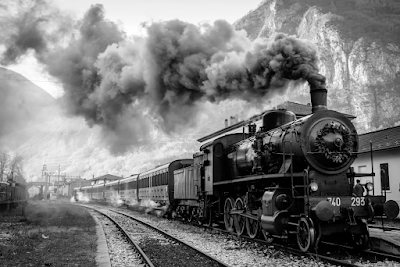 They left New York on trains bound for the Midwest and beyond, stood on train platforms, stages of playhouses, and churches across the US. Folks took some of them as real family members and others took them on for the work. The older a child was, the more likely they were being taken in for work, and so the contracts changed with the age of the children until the contracts reflected indentured work programs. The last train ran to Texas in 1929, ending an era of foster care and adoption in our country.

During my research, the kids in the old photos, peering out the windows of trains and standing on platforms looked determined and brave. Just like the kids from South Central Los Angeles that I used to work with. I had a caseload of youthful offenders, and simply put, it was my job to get them employed. I would pick them up after they paroled and take them around to get clothes, help them fill out job applications, and take them to job interviews. When they came to me in the Youth Authority to be part of my program, they were hopeful and determined. The kids on my caseload had committed terrible crimes, but just like the kids from New York, they were orphans with courage. I felt like I was the right person to tell the story of the children who rode the trains, but I didn’t know where to set it.

Then one year, my father came to Christmas, and he brought all these amazing photos of the family ranches in Montana. They had stories written on the back, and in a lot of these pictures, people wore boots. In one of the first scenes in my book, Charles climbs up onto the porch, takes his boots off, and puts them right next to a long line of boots. In this moment, Charles finally feels like he’s a part of something good and wholesome. 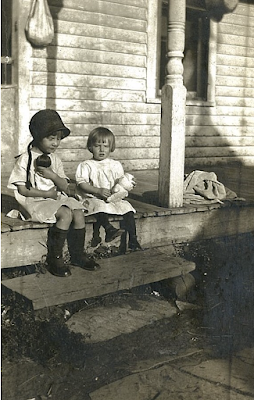 You know, I never could understand why my grandfather was so fascinated with old steam trains, but they revolutionized his life in rural Montana, much like the internet did for all of us in the 90s. They were able to get fruits they never had before, order just about anything from the Sears Catalog, including the parts to make a windmill. 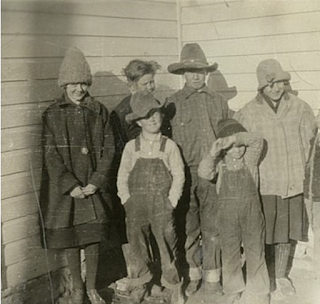 My grandfather walked miles to the Piper train station to pick up the makings of a windmill to light just one light bulb in his house. Funny thing is, my grandfather became an electrician. He also loved to sing and play the guitar. All the songs in the book are songs he sang or wrote: Little Footprints in the snow was about a little girl who went missing in the blizzard on her way back from school. The old Sidehill gouger was about a legendary creature that roamed the hills at night.

Back in the 1920s there were so many creatures roaming the hills, and wild horses were among them. They play a big part in my novel, You Belong Here Now. It’s important to me to make sure that everything that was there in that time and place, is in my story. During my research, I came upon The Pryor Range Mustangs that roamed that part of Montana. Now, I grew up out West, and I never knew we had bands of wild horses roaming national lands! I spent a good day looking at pictures and researching wild horses when I found a picture of a blue roan, and I knew immediately this majestic creature had to be in my novel. They look blue in certain lights and have black manes and tails, something straight out of Hollywood. 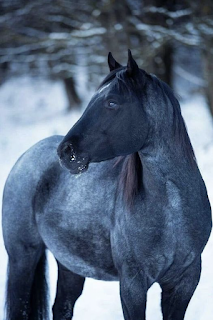 Unfortunately, I soon discovered that ranchers back then rounded up the mustangs to preserve forage for their cattle and sheep. Once they took possession of the horses, they sold them off. Often to slaughterhouses, where they would be canned for chicken feed. The mere thought of that broke my heart. And in my book, it breaks Patrick’s heart, too. He falls in love with the wild horses, but Patrick and Charles are forced to round up that band of wild horses for an adjacent rancher who wants to preserve his grass for his stock. It’s a terrifying process for wild horses, many of them die, breaking legs in their flight.

I’m sorry to say we haven’t made much progress in nearly a hundred years. The Bureau of Land Management is still rounding them up to give forage to stock ranchers. These wild horses are placed in small pens and live miserable lives. And even though it’s illegal, many of them are being adopted by people who sell them off to the slaughterhouses for meat.

Most of our wild horses live in Nevada, Colorado, Oregon, Utah, Arizona, and Wyoming. They are gorgeous creatures that live in family bands and have long standing bonds. When they forage our native grasses, the seeds to these grasses are not destroyed in their stomachs as they are in beef cattle, and so they make great protectors of our public lands. 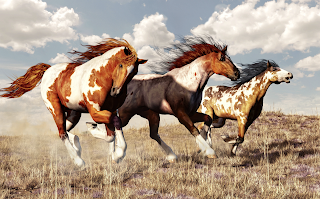 When I look back at the research and discovery for this book, I’m astounded at all that I have learned--even about my own family. Writing is truly an enriching occupation for me. Research and discovery are my favorite part of the writing process. It enables me to breathe life and truth into my stories, and most importantly hope. Whenever I look back into our shared history, I come across the American spirit. Whether it’s a wild mane flying in the wind, or the look on a young boy’s face as he boards a train for a new life or climbs on top of his home to mount a windmill. I always see determination, bravery, and hope.

I hope you’ve enjoyed this sneak peek behind my novel and learning some of the history that went into writing You Belong Here Now. 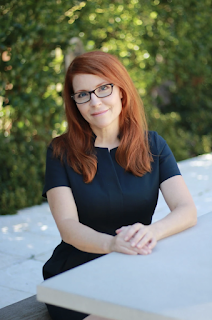 Dianna Rostad was born and raised in the Pacific Northwest. Her parents and extended family come from the ranches of Montana and the farms of Arkansas. Dianna raised three kind, human beings, and when they began to test their wings, she took to writing with a passion, completing Southern Methodist University Writer’s Path program in 2009. A favorite task of her creative endeavors is the discovery and research of people and places where her novels are set. She has traveled extensively to pursue the last artifacts of our shared history and breathe life, truth, and hope into her novels. Now living in Florida, Dianna continues to write big-hearted novels for wide audiences everywhere. 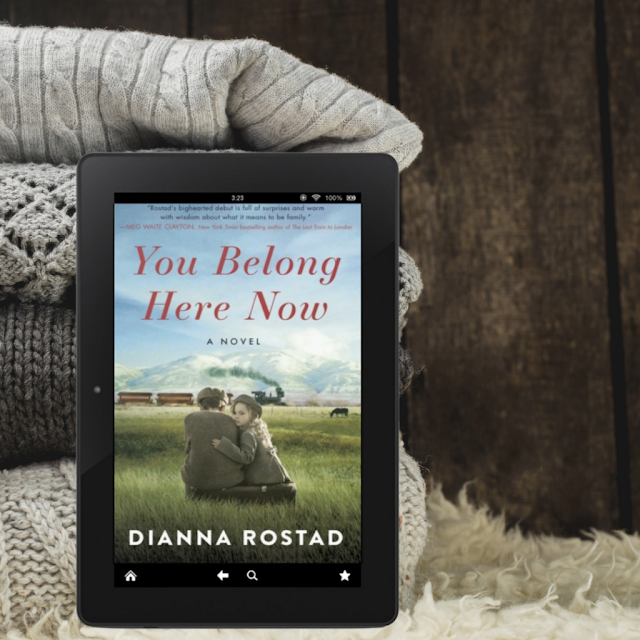