The Poison Keeper:
An enthralling historical novel of Renaissance
By Deborah Swift 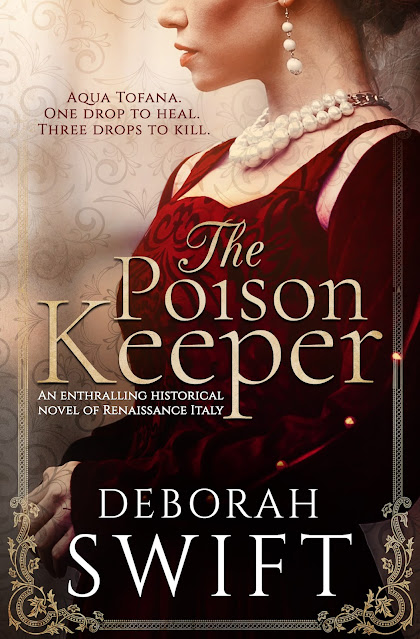 Publication Date: 18th May 2021
Publisher: Quire Books
Page Length: 394 Pages
Genre: Historical Fiction
Naples 1633
Aqua Tofana – One drop to heal. Three drops to kill.
Giulia Tofana longs for more responsibility in her mother’s apothecary business, but Mamma has always been secretive and refuses to tell Giulia the hidden keys to her success. When Mamma is arrested for the poisoning of the powerful Duke de Verdi, Giulia is shocked to uncover the darker side of her trade.
Giulia must run for her life, and escapes to Naples, under the shadow of Mount Vesuvius, to the home of her Aunt Isabetta, a famous courtesan. But when Giulia hears that her mother has been executed, and the cruel manner of her death, she swears she will wreak revenge on the Duke de Verdi.
The trouble is, Naples is in the grip of Domenico, the Duke’s brother, who controls the city with the ‘Camorra’, the mafia. Worse, her Aunt Isabetta, under Domenico’s thrall, insists that she should be consort to him – the brother of the man she has vowed to kill.
Based on the legendary life of Giulia Tofana, this is a story of hidden family secrets, and how even the darkest desires can be vanquished by courage and love.

“I will use treatment to help the sick according to my ability and judgment, but never with a view to injury and wrong-doing. Neither will I administer a poison to anybody when asked to do so, nor will I suggest such a course...”
There may well have been a time when the Hippocratic Oath meant something to Giulia Tofana, but that was before her mother was accused of poisoning Duke de Verdi. Now, Giulia is running for her life.
Giulia had been as clueless as the Duke was to what her mother did behind closed doors, but by trying to help the Duke’s wife kill her abusive husband, Theofania also condemns her daughter’s future. The Duke has concluded that Giulia is guilty of the same crime as her mother, merely because of their association, and he will hunt her down. And he when he does, when he finds her, he will kill her...
From the first tender hints of love to a shocking discovery, The Poison Keeper: An enthralling historical novel of Renaissance by Deborah Swift is a fascinating, yet powerfully emotional story of the infamous poisoner, Giulia Tofana.

With a mesmerising sense of time and place, Swift has presented her readers with an utterly irresistible novel. This is the kind of book that grabs the reader from the opening sentence and does not let go until that final full stop. It is a story that is at all times hauntingly beautiful.
The coldly calculated and deliberate manner with which Giulia approaches her revenge goes against everything that she believed in. Her life, her future, should have included the handsome leatherworker, Fabio. Instead, she seeks revenge. Revenge for her mother and revenge for herself. Giulia, like her mother before her, dares to threaten the pattern of male domination and abuse. She uses her skills, which are aided considerably by her mother’s chymist book, to plot not only revenge but to give hope to those whose futures have been stolen by abusive husbands and circumstances beyond their control. Giulia dares to break this accepted pattern of submission to the dominant and powerful men in her life, and for that, her actions can be seen as heroic, and yet, there is always that realisation that we are following the journey of a woman who becomes not only a murderer but someone who willingly aids in the murder of others. Her desperate attempts to convince herself that she merely gives the means, and what happens to her poisons after she has sold them, seemed incredibly naïve on her part. But it was also understandable. Giulia goes to church every Sunday, however Christianity seemingly offers her little solace or hope of heavenly justice, and besides, Giulia cannot wait for God to avenge her. She still goes to church, she still wants the life she had, but that has been stolen from her, and as new revelations threaten to dismantle everything she thought she had known, the only thing that remains constant in her life is her knowledge of potions and poisons. For men such as Domenico, Giulia is the Eve that he has been waiting for—the one woman who dares to eat from that Tree of Knowledge and who dares to question the order of things. While Domenico wages war on the women in his life, Giulia, like the serpent in the bushes, dares to tread where angels fear to. Giulia was an incredibly fascinating character, her depiction was masterfully portrayed and very realistic in the telling. Although I deplored the person she became, I could understand her reasoning. In a world where men ruled and women endured, someone needed to stand up and be counted. It was not enough to shout the word “enough”—someone needed to be brave enough to see such a word through to the bitter end. Giulia is that someone.
The recurrent theme in this novel is the way in which men held power over women. They are both physically stronger and, with the backing of a seemingly morally corrupt Church, they can do whatever they want. Through the depiction of characters such as the de Verdi brothers, Swift explores the power that such men had and how their wealth covered a multitude of sins. For example, Domenico, the younger brother, is determined to build a lavish church to demonstrate his devotion to God, but as he steals from the very people he is meant to protect, by the means of a brutal protection racket, the real reason for Domenico's seemingly Christian devotion soon becomes clear. The church he is having built is not for God. It is so Domenico can feed his insatiable desire for admiration. The brothers seem inherently evil. They are both vile and cruel, but there is also an element of vulnerability about the two of them. They may think they are invincible, but the shocking truth is that despite their wealth and their men at arms they are no safer than the women they so cruelly abused.
The beautiful and famous courtesan, Isabetta, was a character that fascinated me. Unlike what those closest to her think, Isabetta is not completely lost to the scent of the poppy. Her addiction may well have shaped her life and taken her away from the man she loved, but she still tries to hang onto the life she has built for herself and the women under her charge. Isabetta is a woman that one could not help but feel sorry for. Her world has the appearance of wealth and opportunity, but her feet are on unstable ground as she is forced to bow to the whims of the wealthy. However, Isabetta is a character that is not as meek as she first appears. There is a strength in her that made her a very appealing character, and she certainly helped to drive the story forward.
The historical detailing of this novel is second to none. The hours that Swift has dedicated to researching this period of history shines through in the enthralling narrative. Swift has an almost visceral understanding of what makes history worth reading, and she is also the perfect tour-guide to take her readers on a trip back in time to a dangerous past.

The Poison Keeper: An enthralling historical novel of Renaissance by Deborah Swift is the kind of book that you have to recommend to everyone you know so that you can discuss it at length over coffee. I was thoroughly enchanted with this novel from beginning to end. This novel is a must-read for fans of quality Historical Fiction.

Amazon UK • Amazon US
Read for FREE with #KindleUnlimited subscription. 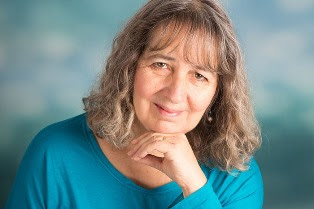 Deborah Swift is the author of three previous historical novels for adults, The Lady’s Slipper, The Gilded Lily, and A Divided Inheritance, all published by Macmillan/St Martin’s Press, as well as the Highway Trilogy for teens (and anyone young at heart!). Her first novel was shortlisted for the Impress prize for new novelists.
She lives on the edge of the beautiful and literary English Lake District – a place made famous by the poets Wordsworth and Coleridge.
Connect with Deborah: Website • Facebook • Twitter • Goodreads. 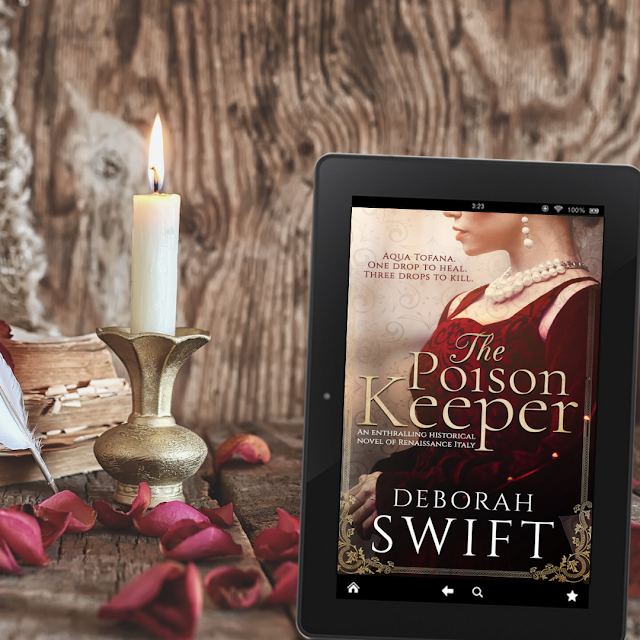