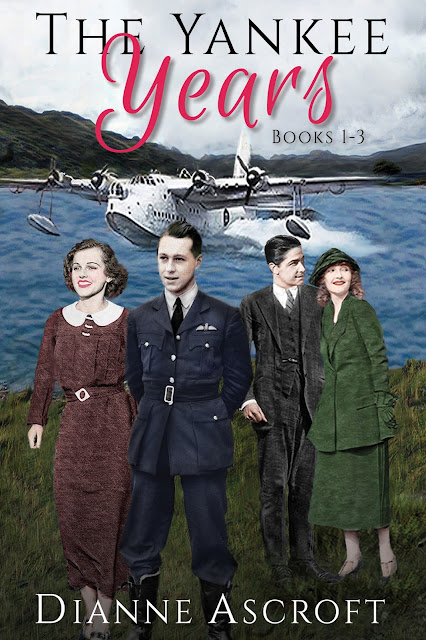 After the Allied troops arrived in County Fermanagh, Northern Ireland during the Second World War, life in the quiet, rural county would never be the same again.

The Shadow Ally
June 1941: When Ruth Corey finds a letter her journalist beau, Harry Coalter, has written, revealing details of the secret construction of an American flying-boat base, she fears it could destroy America’s neutrality and land him in serious trouble. The letter must not be posted. She enlists the help of attractive Italian-American civilian contractor Frank Long to help her stop Harry. Can Ruth safeguard this military secret and protect her beau?

Acts of Sabotage
December 1941: After the attack on Pearl Harbour, the new American flying-boat base must be ready when the first US troops arrive on Northern Ireland’s shores. But, despite Frank’s best efforts, religious conflict within the workforce and thefts on the construction site threaten to scupper the project. Frank confides his worries to Ruth and the pair devise a plan to catch the thieves. Can they stop these acts of sabotage and then what does the future hold for them?

Keeping Her Pledge
June 1942: Pearl Grainger’s life is much more exciting since the Allied troops arrived but she is unprepared for the harsh reality of war, and her RCAF boyfriend is determined to protect her from it. Can Pearl keep her pledge to do her bit for the war effort without losing the man she loves?

Dianne Ascroft writes historical and contemporary fiction, often with an Irish connection. Her series The Yankee Years is a collection of Short Reads and novels set in World War II Northern Ireland. After the Allied troops arrived in this outlying part of Great Britain, life there would never be the same again. The series brings those heady, fleeting years to life again, in thrilling and romantic tales of the era.

Her other writing includes a ghost tale inspired by the famous Coonian ghost, An Unbidden Visitor; a short story collection, Dancing Shadows, Tramping Hooves, and an historical novel, Hitler and Mars Bars