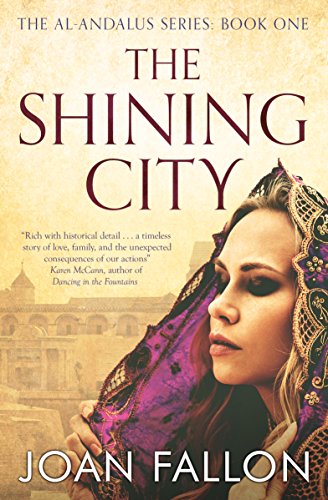 This is the story of a city, a city that is now in ruins: Madinat al Zahra.  The year is 947 AD, a time when southern Spain is under the rule of the Moors.  The ruler, Caliph al Rahman III is rich, powerful and cultured.  His lands are, at long last, at peace and the capital, Córdoba, is considered to be not only the most beautiful city in the civilised world but also the seat of learning and culture.  Against this background we meet the artisan Qasim - he and his family have moved to Madinat al Zahra to make their fortune as potters.

Qasim is a good husband and father.  He works hard, says his prayers and keeps out of trouble.  But Qasim has a secret; his past is not what it seems.  When a stranger arrives asking questions about him, he is worried that his secret will be discovered and everything he has worked for will be destroyed. He has to take action.

What did I make of the story?

An innocent question by a curious nephew unlocks the most vivid and painful memories of old Uncle Omar. Omar's memories take him back to the year 974 AD. That was the year where he met the love of his life, but unfortunately for him, she belonged to another. His forbidden love sets off a chain of events that he could never have foreseen, and it takes him on a journey that he never expected.

What an evocative and emotional read Book One of the Al-Andalus Series is. The Shining City is one of those rare gems, where the writing is exquisite, the story is captivating, and the protagonists are memorable.

Fallon caught my attention on the first page and continued to hold it throughout this beautiful story. I adored the characterisation of Isolde. She is so strong of spirit – despite witnessing her mother's brutal murder, as well as suffering the indignity and fear of captivity. Isolde survives the horror of the slave markets and ends up in the harem — life as she knows it is over. Isolde was so believable, so well crafted as a character that I don't think I will forget her in a hurry.

The Shining City reminded me greatly of Margaret Landon's, Anna and the King — albeit a Dark Age version — it has the same sense of grandeur and also despair. This book took my breath away. The descriptions were so vivid, and the history was so elegantly told that it was as if Fallon had opened a door and beckoned me into this world that she has created. I must say that Fallon is the most remarkable tour-guide for 10th Century Spain.

I can not praise this book enough, it is definitely on my repeat-to-read list.

The Scottish author, Joan Fallon, began her career as a writer after moving to Spain at the start of the new millennium; her first published work was a social history, 'Daughters of Spain', inspired by the women she met in her new home. The research for this book in turn encouraged her to write the following two novels: 'Spanish Lavender', which is set in Malaga during the early years of the Civil War and 'The House on the Beach', the story of two young women growing up in Franco's Spain. Her subsequent novels have grown out of her experiences living and working in Spain.
She is a member of the Society of Authors and the Alliance of Independent Authors.
You can find out more about Joan and her books by going to her website www.joanfallon.co.uk or following her on Twitter @joan_fallon
Posted by Mary Anne Yarde at 08:00