Please give a warm Coffee Pot welcome to Historical Fiction author, Wendy J. Dunn. Wendy is talking about the inspiration behind her award-wining novel. 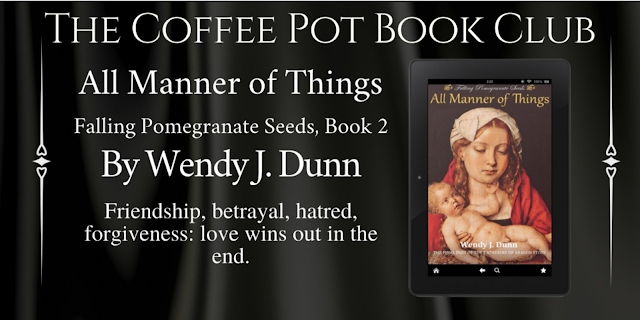 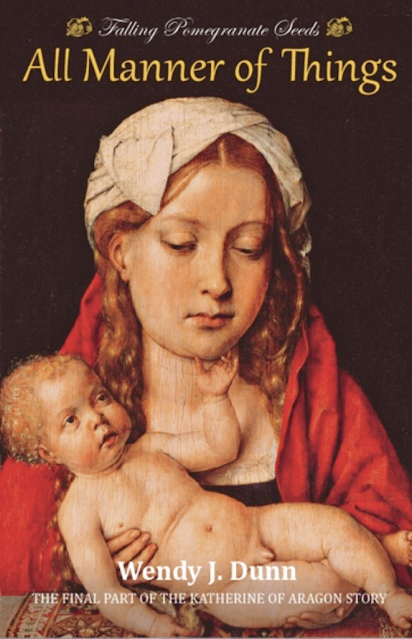 Publication Date: January 15th 2021.
Genre: Historical Fiction.
Print Length: 449 Pages
Publisher: Poesy Quill Publishing
Winter, 1539
María de Salinas is dying.
Too ill to travel, she writes a letter to her daughter Katherine, the young duchess of Suffolk. A letter telling of her life: a life intertwined with her friend and cousin Catalina of Aragon, the youngest child of Isabel of Castile. It is a letter to help her daughter understand the choices she has made in her life, beginning from the time she keeps her vow to Catalina to share her life of exile in England.
Friendship, betrayal, hatred, forgiveness – All Manner of Things tells a story of how love wins out in the end. 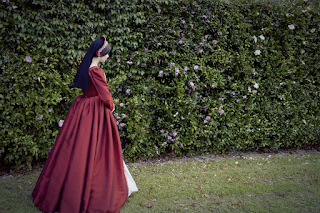 There comes a time when I know it is time to let a new work go into the published world. When I know I must be brave, and say to myself, it’s ready. I must set it free so I can start on the new project already demanding my undivided attention. But that moment of publication has always brought with it true terror. Reading is subjective. I know that not everyone will like my storytelling. But what happens if too many people HATE this work of mine that I have devoted years of my life to create and complete. But to my delight, my fourth Tudor novel, Falling Pomegranate Seeds: All Manner of Things, received three new five-star reviews at the end of 2020, a month before its official publication date. These reviews made me more than simply relieved, but also reflective.

One reviewer, Heidi of Adventures of a Tudor Nerd, wrote, “I only knew about María de Salinas through brief mentions of her in biographies and other novels about Katherine of Aragon, so I was excited to read her story”. Amy at Endo the road opened her review by saying, “I was aware of María de Salinas before reading this but had little knowledge of her own story”. Cindy L. Spear commented, “María’s life itself is a fascinating one…”

That is the thing. My years of research failed to prove to me if María lived a fascinating life or not. I believe she must have lived an extraordinary life during her time with Katherine of Aragon. But history shrouds María’s life in the deepest shadows and reveals very little about her.

All Manner of Things gave me two stories to tell—one about Katherine of Aragon, and the other about María de Salinas. I see historical fiction is a fictional story informed by history. All Manner of Things reconstructs Katherine’s story using my imagination fed upon historical facts. With history so silent about María, I used my imagination to fill the gaps. Omissions and erasures offer opportunities for fiction writers to plot their work by asking what if? (Edwards 2007). What if, I asked myself, María met and fell in love with her future husband—married then to another woman—when she first arrived at court in 1501? What if she saw the future Henry VIII with the eyes of a woman unfettered by the knowledge he would one day be her husband? What if María provides for the reader complete access to the life of Katherine of Aragon?

‘What if?’ questions and historical research always feeds my imagination in the crafting of my novels. Researching the life of Katherine of Aragon provided me with glimpses of María de Salinas. It was more of a glimpse when I read of María’s winter ride in 1536 to Kimbolton Castle, determined to be with the dying Katherine of Aragon. This story of a woman (a woman in her early fifties) riding in treacherous weather to the virtual prison of Katherine of Aragon, fired my imagination alight. María even rode to Kimbolton Castle lacking the permission from Henry VIII. She arrived at the closed-up castle hurt from a fall from her horse—which she used to her advantage, demanding admittance to the castle because of her injuries. But as soon as she was inside, she slipped away, going straight to the chambers of Katherine of Aragon. María stayed with Katherine until Katherine breathed her last in her arms.

It is a gorgeous story of love and friendship from history—one that still gives me goosebumps. But that is the only story of true substance I could find out about María. History hides the rest of her story. I could not even find a portrait of her.

So—what did I know so I could create and construct her story? I knew she was a lifelong friend and fellow country woman of Catalina of Aragon. I knew she served Catalina with great devotion for many years. She married approaching thirty or just over thirty—very late for a woman of her times. Her husband was a wealthy, childless widower—and his death, about ten years after their marriage, left her vulnerable to a brother-in-law determined to take wealth belonging to María’s daughter, his niece. I believe this led to María’s decision to place her daughter Katherine as the ward of Charles Brandon, the duke of Suffolk. This wardship protected her small daughter from men like her uncle. Maria also likely expected Katherine to one day marry the son of Charles Brandon and his wife, Mary Tudor, the sister of Henry VIII. Unfortunately, Mary Tudor’s death in 1533 overturned all these plans. With his only son and heir believed to be dying, Charles Brandon married his young ward weeks after the death of his wife.

Besides these facts, history told me little else about María de Salinas. I had a feast from history to draw from for my story about Katherine of Aragon, but had to rely on my imagination for the voice and story of María de Salinas.

Giving voice to and appropriating the life story of a person of the past plays a major part in the crafting of historical fiction. While this is something I do as a writer of historical fiction writer, it does not mean I do it with little soul searching. This is something that keeps me awake at night. During the construction of my first drafts, I ask myself again and again if I have any right to give voice to the people of the past? The amount of research I do about my subjects gets me through my doubts. I also believe these people deserve their stories to be remembered and told. Even if it means using imagination (imagination drawing from research) to do so.

William Styron once wrote: “While it may be satisfying and advantageous for historians to feast on rich archival material, the writer of historical fiction is better off when past events have left him with short rations” (2010, p. 428).

I have found the truth of these words in all my novels. In these works, I gave voice to historical personages who were little known. But the fascinating bones of their lives were there for me to put flesh on by the means of my imagination. Knowing so little gives my imagination the freedom to imagine. 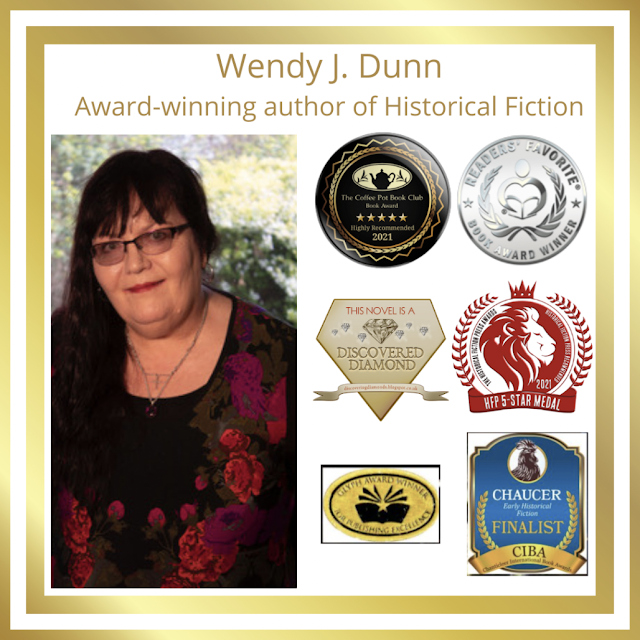 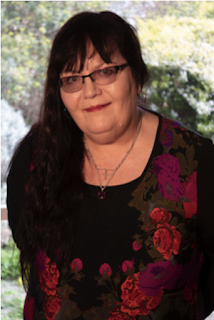 While she continues to have a very close and spooky relationship with Sir Thomas Wyatt, the elder, serendipity of life now leaves her no longer wondering if she has been channeling Anne Boleyn and Sir Tom for years in her writing, but considering the possibility of ancestral memory. Her own family tree reveals the intriguing fact that her ancestors – possibly over three generations – had purchased land from both the Boleyn and Wyatt families to build up their own holdings. It seems very likely Wendy’s ancestors knew the Wyatts and Boleyns personally.