Please give a warm Coffee Pot welcome to Historical Fiction author, Pam Lecky. Pam is going to be talking about The Southampton Blitz (WW2)  today, but before we begin, check out Pam's fabulous upcoming new release. 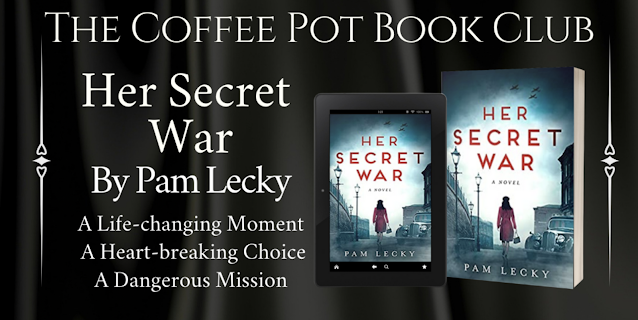 Her Secret War
By Pam Lecky 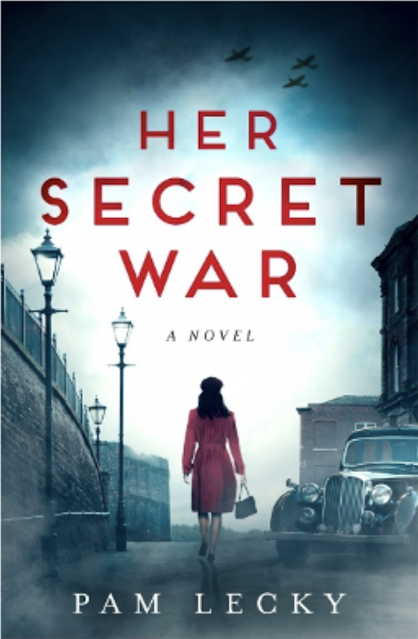 With nothing to keep her in Ireland and a burning desire to help the war effort, Sarah seeks refuge with relatives in England. But before long, her father’s dark past threatens to catch up with her.

Sarah is asked to prove her loyalty to Britain through a special mission. Her courage could save lives. But it could also come at the cost of her own…

It is often the children who are most affected by war and WW2 was no exception. A poignant example of the terror experienced by a child is a quote from a young girl who survived the Southampton Blitzkrieg.

“There must have been some sort of warning before the sirens and when the barrage balloons went up, I knew it meant danger. I was very frightened. I used to rush down the garden to go headfirst into the shelter.”

Being within easy reach of German airfields in France, Southampton was an easy target for the Luftwaffe and a strategic one. Over the course of the war, 57 raids were carried out with approximately 2,300 bombs dropped. Six hundred and thirty-one citizens were killed and 898 were seriously wounded. The damage was extensive with 45,000 buildings damaged or destroyed.

Why was Southampton such an important target for Nazi Germany?

Southampton was a busy naval port and Woolston was home to the Vickers Supermarine factory which was making Spitfire planes. The industry employed thousands of technicians and engineers. By 1940, production was at full capacity to meet the demands of the RAF who were desperate to replace the planes lost during the Battle of Britain. The factory was hit in September 1940, with much of the factory destroyed and 110 people killed. In the aftermath, Vickers Supermarine successfully dispersed its activities throughout Hampshire for the rest of the war, therefore making it difficult for the Luftwaffe to either find or destroy their works again.

Two dates stand out most due to the ferocity of the attacks. On the evenings of 23rd and 30th November 1940, there was such intensive bombing that the city’s water supply was ruined. Many of the fires, ignited by German incendiaries, had to be left to burn themselves out. The glow of the firestorm could be seen as far away as Cherbourg on the coast of France. The Nazis claimed they had left the city a smoking ruin as this American newspaper headline shows. 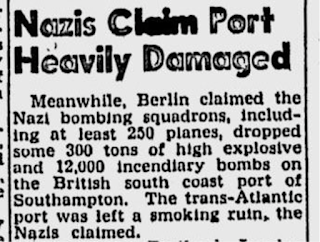 An earlier raid on 6th November, almost destroyed the city’s Art Gallery. The raid targeted the Civic Centre; as Hermann Goering head of the Nazi Luftwaffe had arrogantly observed – it looked like a ‘piece of cake’ from the air, and he would ‘cut himself a slice’. In the course of the attack, 12 bombs were dropped including a direct hit with a 500lb high explosive on the Gallery. This bomb penetrated the roof, finally exploding in the basement killing 35 people including 15 children.

A tragic footnote: A gentleman by the name of Edgar L. Perry and his wife were killed on 23rd November 1940 in the Southampton Blitz. Edgar had worked as a coal trimmer on the doomed vessel, RMS Titanic, and had survived its sinking in 1912. 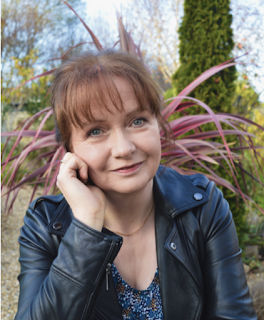 Pam is an Irish historical fiction author with Avon Books UK/Harper Collins. She is a member of the Historical Novel Society, The Crime Writers’ Association and the Society of Authors. She is represented by Thérèse Coen, at the Hardman & Swainson Literary Agency, London.

October 2021, will see the release of Her Secret War, a WW2 historical thriller with lots of twists and turns. This will be the first book of two with Avon Books UK/Harper Collins and tells the story of an Irish girl who travels to England only to be caught up in the dark world of espionage, where lies and treachery reign.

From an early age, Pam had a particular fascination with all things historical, from food and clothes to architecture and social history, so it is little surprise that her books are set against historical backdrops, from the late Victorian era right up to and including WW2.

June 2019 saw the publication of the first book in Pam’s historical mystery series – The Lucy Lawrence Mysteries. No Stone Unturned is a fast-paced adventure set in 1886 and was awarded the B.R.A.G. Medallion. Footprints in the Sand, the second book, set in Egypt, was published in March 2020 and won a Silver Medal in the Coffee Pot Book Club Book of the Year Awards 2020. Pam is currently working on the third book in the series.

Her debut novel, The Bowes Inheritance, was awarded the B.R.A.G. Medallion and was shortlisted for the Carousel Aware Prize 2016 and longlisted for the Historical Novel Society 2016 Indie Award.

She is also rather fond of short stories and writes both contemporary and historical tales, all of which can be found on Amazon