I feel like I should be playing the theme music from Robin Hood Prince of Thieves when I talk about Old Wardour. I think I was about thirteen when that movie came out.  And I can remember going to the cinema again and again to watch it. It was, and has always been, a firm favourite.

I can also remember my friends and I joking about how well traveled Robin was. Robin landed at Dover, headed up to Hadrian's Wall on the borders of Scotland, back down to Salisbury in Wiltshire before heading to the North, where he fought a big man from Bristol in a river in Yorkshire. Perhaps it was an English thing... I doubt anyone else would have found it amusing!

What has this to do with Old Wardour? 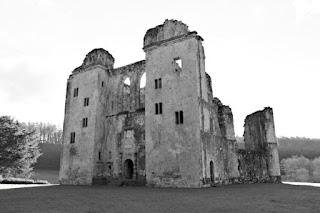 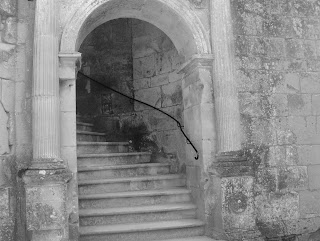 Old Wardour has a fascinating history. It was built in the 14th Century and was inspired by the continental designs of the time, which is why it is hexagonal. It sits between a picturesque lake and a wood. It even has its own grotto. However, if you take a little look closer at its wall, you will see it had a troubled past. There are musket holes in the masonry.

During the English Civil War (1642-1648) Old Wardour's owners, the Arundell family, were staunch supporters of the King. In 1643, Edward Hungerford, a Parliamentarian,  and his men surrounded the castle. Thomas Arundell, 2nd Baron Arundell of Wardour, was away on King's business, when Hungerford and his men attacked. Lord Arundell's wife did the best she could to defend the castle, but after only a short siege she had to surrender.

Lord Arundell died and Henry, his son, laid siege to his own castle. Whether he meant to blow it up, I guess we will never really know. Unfortunately a large part of the castle collapsed. The Parliamentarian's surrendered and Henry won his castle back. But instead of rebuilding it, the Arundell eventually built a new home in the grounds of the old one.

Nevertheless, it is great castle to explore. It is not just a hollow shell, as many of these ruins are. You can climb those stairs, you can explore all the room and you can look out the windows at the view.

Thats all for now.
See you soon.
Mary xx