The search for Arthur continues...Gildas

I may have got a little distracted over the last few blogs. There are so many places that I take inspiration from that I just have to share them with you. But now I am back on track and the search for Arthur continues...

Let me introduce you to Gildas. 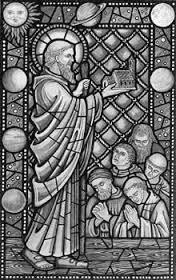 Like Bede, Gildas was a 6th Century monk who was born in the year of the Battle of Mons Badonicus, or, The Battle of Mount Badon, as we now know it. Mount Badon is, of course, the famous battle where King Arthur halted the Saxon invasion for a time.

Unlike Bede or Nennius, Gidas's On the Ruin and Conquest of Britain, reads like a damning sermon. He certainly did not mince his words! He target five particular kings - goodness knows what they had done to upset him - and he isn't particularly forgiving of his fellow priests.

He seems to be more than a little obsessed with the Book of Daniel, the Christian Apocalypse and the Book of Revelations. I don't think I would have liked to have listened to him preach! And I can imagine he wasn't particularly popular with his fellow clergy.

Gildas's work is considered one of most important sources on the history of Britain in the 5th and 6th centuries, simply because, for once, it was written by someone who was actually there and although it is not considered a primary sources it is about as close as we are going to get.

However, Gildas give the word 'vague' a whole new meaning. He gives us very few names and no firm dates. He misses out chunks of history if they do not serve his purpose or his message.

So what does he say about Arthur?

The only 5th century person he does talk about is a man called  Ambrosius Aurelianus.

"... a gentleman who, perhaps alone of the Romans, had survived the shock of this notable storm. Certainly his parents, who had worn the purple, were slain by it. His descendants in our day have become greatly inferior to their grandfather's excellence..."

Now this is where it gets a little confusing. Ambrosius appears to be of Roman decent, which Bede confers with. He organises Briton and leads them in battle against the Saxons. Some historians believe that Ambrosius was Arthur, but remember that Bede named them as two separate people.

So what is going on?

Gildes is very vocal about many things, but not Arthur. He doesn't mention him. At all.

Which led me to the question...Why on earth not?

Arthur has always come across as a sort of people's hero. But in monastic writings of the time he is not described as a hero, in fact he is described as the complete opposite. Which leads me to suspect two things. Firstly, he wasn't as good as we all think he was. Or, he had fallen out with the Church. I kind of lean towards the latter. According to the Life of Gidas, Arthur killed Gildas brother. No wonder he omitted him! He wasn't going to make him immortal in his works. Who could blame him?

So a bit of a dead end there in our search for Arthur...although I do find it all rather fascinating.

That's all for now. Take it steady.
Mary xx
Posted by Mary Anne Yarde at 19:58