Last time I talked about Old Wardour Castle and, if you can remember, I mentioned how Sir Edward Hungerford lay siege to it in 1643. So I thought it was only fair to look at Edward's home as well, and in the next two blogs I am going to do just that.

But first I would like to look at the little parish of Norton St Philipe, Somerset, where the Hungerford's had their home.

Norton St Philip is fantastic in itself without the added bonus of a castle. There was an incredibly bloody battle fought there during the Monmouth Rebellion or "Pitchfork Rebellion," in 1685. Charles II had died and the throne fell to his brother James II, the Duke of York. James Scott, 1st Duke of Monmouth was the illegitimate son of Charles II and he claimed that he was the rightful king and attempted to upsurge James.

It is said that a battle was fought on the North side of the village on a street called Chevers Lane. The locals know Chevers Lane as Bloody Lane. There was so much bloodshed on the day of the battle that the blood flowed down the hill like a river. It must have been horrendous, I don't even want to think about it. The rebellion failed and Monmouth was executed. The feared Judge Jefferies, who also became known as "The Hanging Judge," conducted 12 executions on the village common. A bloody history indeed.

But on a lighter note...Norton St Philipe boasts the oldest tavern in England. The George was built in the 14th or 15th Century...no one really know the exact date, and no one really cares when one has had two or more pints! Lets just say it has been there for a long time and leave it at that. 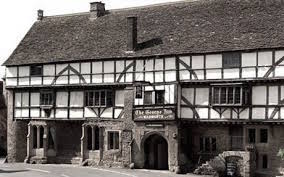 It has a fascinating history. To start with it was a wool store. It was used as accommodation during the annual wool fairs. The Inn then became part of the Stage Coach route between London and the South West. Monmouth used the Inn as the headquarters for his army during the rebellion and then, ironically, it was used by Judge Jefferies as a courtroom to condemn those who had fought with Monmouth.

Regardless of its history, the last time I was there it served really good chips!