Once again I find myself reading about the House of Plantagenet (1126 - 1485). The Plantagenet's gave us some of the most famed British monarchs of all time, as well as a few controversial ones as well! The Plantagenet reign came to an end on the 22 August 1485, when King Richard III was killed by the Lancastrian Army, lead by Henry Tudor, at Bosworth Fields. 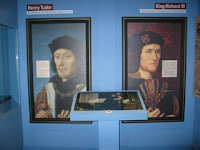 On the face of it, Henry Tudor and his army should not have won at Bosworth, he was outnumbered. But Richard had an adder in his nest - also known as William Stanley - who betrayed his king and placed Henry Tudor on the throne of England and the rest, as they say, is history. But I often wondered what would have happened if Richard had won?


I have read several articles written by Richard Unwin, and he takes a very different view to what historians commonly agree on as to what happened that fateful day in August. He has come to the conclusion that although Stanley may well have wanted to betray the king, the common people who were under his command, would not have taken a sword against their regal monarch in favour of a foreign invader. He believes that when Stanley finally joined the battle, he was in fact, coming to the aid of Richard. The Kings Army, seeing Stanley’s regiments charging towards them, thought, mistakenly, that they had been betrayed. 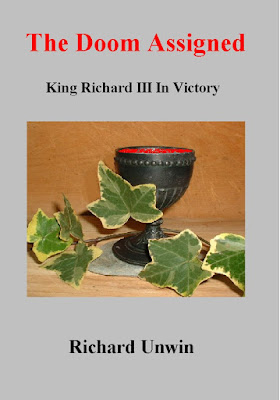 Back to the book…
The Doom Assigned is an alternative history. A history in which Richard III's army does not make this disastrous mistake, instead they welcome the help from Stanley, and the fields at Bosworth is theirs.


I have not read an alternative history for a very long time. I believe the last one I read was Robert Harris, Fatherland, so I was looking forward to read The Doom Assigned.

After I got over my initial - that is not what happened -  chanting voice that seemed to be racing around my head, I began to enjoy it.


The story follows the - I want to say fortunes and misfortunes, but it is more like...that was lucky, incredibly lucky, and that's a stupid thing to do, don't do that again - adventures of a young squire, Robert de la Halle, the son of the king’s armourer.

After the victory of Bosworth, Richard orders the Lancastrian's traitors, and those awful Tudors, to be hunted down and brought to justice. This war would end…for once and for all. Richard demands peace for the rest of his reign.


Robert finds himself in the thick of the action and he seems to inadvertently invite trouble. He certainly does not seek glory; his only wish is to serve his king to the best of his abilities.

The story takes you from shores of Morecombe Bay, to the siege of Pembroke Castle where the traitorous Jasper Tudor, has taken refuge. You experience the court of the King of Portugal and the struggles of a squire who has been awarded the dilapidated Staunton Manor. You find yourself immersed in bloody battles, both on land and at sea. Young Robert, also struggles with family secrets and first love, as well as a very naughty monkey - yes, I said a monkey - Robert learns a valuable lesson...one should never take a monkey hunting and drugging the said monkey is probably not such a good idea.


King Richard is determined to bring order to his kingdom, and to make the people of his kingdom love him. But Lady Margaret Stanley is intent upon revenge and threatens to destroy everything that Richard is working so hard to achieve.


When I started reading The Doom Assigned, I did not realise it was part of a series, thankfully it is a stand alone book. I did not, at any point, feel that I needed to read the other books that came before, in order to understand what was going on.


Richard Unwin historical knowledge is staggering. It is very clear from his writing that he has researched his area of interest well. He is very descriptive in his writing, however, sometimes I felt a little overwhelmed by this and I wasn't really that interested in what they were wearing or the genealogy of certain characters, who were not, I felt, that important to the story. For me, this slowed a perfectly good story down, and make no mistakes I thought the story was great. I really enjoyed it. The demise of Henry Tudor was breathtakingly haunting and it is one of those images that will stay with me for a long time.


Robert is a believable character, who is young, a little naive, courageous and very loyal to his king. I liked him, and it was nice to read a story from this era that was not from a highly born nobles perspective.

The epilogue was a pleasant surprise and I love the way the author has thought long and hard about what would have happened to the royal family if Richard had held on to the throne of England.

The Doom Assigned: King Richard III in Victory, was an enjoyable book and I must now hunt down the rest in the series.

If you are interested in the War of the Roses with an alternative ending, then this is the book for you. Why not check it out today?


Richard Unwin is a retired Technical Author with an interest in English history, poetry and literature. His interest in medieval history, and particularly the life of King Richard the Third, goes back to his early youth. He is a member of the Richard III Society and a local Historical Society in Manchester, England where he lives. He particularly looks for, and exploits in his writings, those elements of history, which though popularly believed, can be shown to have an alternative but logical explanation.
For more information about Richard Unwin, check out his website, here.