What does King Arthur, King Edward III and Windsor Castle have in common?

"His like had not been seen since the days of King Arthur."
Jean Froissart's on King Edward III

During the Middle Ages, Arthur and his knights really captured the imagination of the nobility. There was something appealing about the idea of Arthur, his brave and loyal knights, and the knightly code of honour. He certainly caught the imagination of one young King, Edward III (1312 -1377). 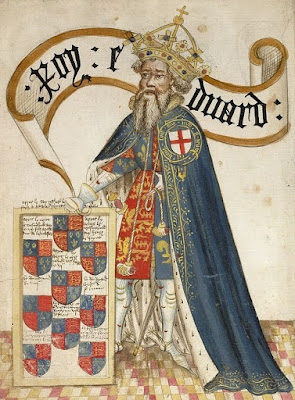 Edward III as head of the Order of the Garter, drawing c. 1430–40 in the Bruges Garter Book.

Edward had some very grand ideas when he inherited the crown. He wanted to model himself and his court on the legendary King Arthur.  He would have knights, just like Arthur did. They would be worthy men who would stand with him, brave men... men he had chosen - It was not surprise that his reign saw the creation of many Earls and Dukes.

At first, Edward III was incredibly popular, despite the expensive wars with Scotland and France. But his reign was far from easy - a great many challenges where thrown his way, most notably The Black Death. The Black Death reduced the population of Britain drastically and also claimed the life of Edward's daughter.

The plague dealt industry a devastating blow - there was a shortage of skilled workmen and those who had survived the plague could charge whatever they wanted for their labours - Laws had to be introduced to fix wages and prices.

The first ever speaker to the Commons was appointed during his reign and for once, this Plantagenet king, seemed to get on really well with his children. 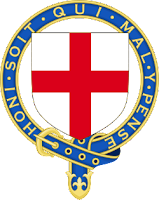 Edward founded the Order of the Garter c.1344. It is said, he got the idea for the name after an incident at a ball when the Countess of Surrey, Catherine Montacute, dropped her garter and Edward picked it up.

To this very day the Order of the Garter is the highest order of chivalry and the third most prestigious honour that the Queen can bestow.


So where does Windsor Castle fit in to all this?

Have you ever heard of a television program called Time Team?

If you are from the UK then chances are you have. For those who don't know, Time Team was an archaeological dig program, where archaeologists and historians do what they do - in a short space of time - whilst being filmed. 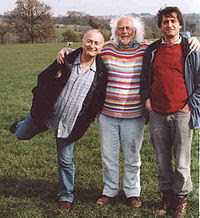 Time Team was hosted by Sir Tony Robinson - he is the man standing on one leg! (who is famous for his role as Baldrick in Blackadder)... who, incidentally, I once met at a music festival when I was a teen - When I say met, I mean my friend and I were stood next to him at a vegetarian burger wagon whispering, "That is Tony Robinson," to each other. Anyway, I digress...

In 2006, in celebration of Queen Elizabeth II, 80th Birthday, Oxford Archaeology and Time Team were given permission to excavate three royal sites over four days. These sites were at Buckingham Palace, Palace of Holyroodhouse and Windsor Castle. It was Windsor Castle, and what they found there, that sparked my interest.

The South Wing of the Upper Ward - Windsor Castle.

In the Upper Ward, of Windsor Castle, the archaeologists found the foundations of the Round Table Building that was erected in 1344 by Edward III - I told you he wanted to recreate Camelot.

Edward ordered the construction of this building in 1344, he wanted somewhere he could host his new Order of the Round Table. The building was going to be used for feasting, festivals and theatrical re- enactments of stories from Arthurian legends.
Chroniclers tell of a large round building, 200 ft (61m) across. But for reasons unknown he never finished it. He later abandoned this order and created the Order of the Garter instead.

So there we have it - be it rather briefly!

This is what King Arthur, King Edward III and Windsor Castle have in common!
Posted by Mary Anne Yarde at 14:10

Email ThisBlogThis!Share to TwitterShare to FacebookShare to Pinterest
Labels: Arthur Pendragon. King Arthur and his Knights of the Round Table, Arthurian Ledgend, King Arthur, King Edward III, The Round Table, Time Team