The Round Table (tournament)

They loved Arthur and his knights in the Middle Ages. King Edward III was more than a little obsessed with him and even Henry Tudor named his eldest son after the legendary King. But it wasn't only the British who celebrated the life of Arthur and his knights. He was very popular across the rest of Europe as well.

Imagine a Medieval festival that involved gallant knights - worthy men of court - who took on the names of those brave, noble men of Camelot. Lancelot, Gawain, Percival - they were all resurrected, they were all there. Now imagine, if you will, the pounding of horse hooves as the knights charge towards each other, lances outstretched. The cheer of the crowds when a lance struck true. In the melee the spectators shout well meaning encouragements to their favourite knights. The sound of music and the smells of food is wafting through the air. This is a great day. This is what it was like in Arthur's Briton. This is what those medieval nobles wanted to return to. This was...

The Round Table was a festival of sorts, which celebrated everything King Arthur. Strangely, however, the first version of this festival occurred in Cyprus in 1223 to celebrate a knighting of a worthy man.

As time progressed, and the festival became more popular across Europe, competition set in. We have all seen what happens when there is a major sporting event like the Olympics - each hosting country tries to outdo the show the previous one had put on and the same could be said for The Round Table.

René of Anjo - who also went by the name of René I of Naples - festival was so elaborate that he actually erected an Arthurian castle for his 1446 Round Table event!

In 1566 Mary, Queen of Scots, held a feast for 30 at her castle in Stirling, when she hosted the event. It is said she had a replica of Arthur's table. It was also a masque themed celebration of the baptism of her son, James, who would late become James VI and I.

Have you ever been to a joust? 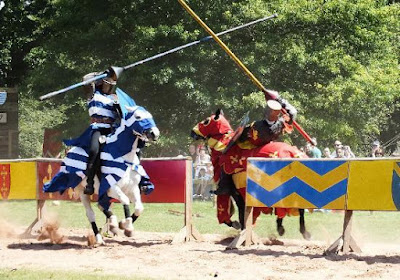 I have actually lost count how many I have been to one. My whole family really enjoys them. We get behind our chosen knight and cheer him on, just like they would have done in the Middle Ages. I have yet to see a better joust than the theatrical jousting that happens every year at Warwick Castle. Of course, the theme there is the War of the Roses, because Warwick Castle was the home of the Kingmaker, Lord Neville. The York knights are always portrayed as villains, but the knights split the crowd so both York and Lancaster are cheered on equally. The festival feeling at such events gives us some idea as to what it must have been like back in the Middle Ages. I am a real, I guess you would call it a fan, of living history, especially when children are involved - I think reenactors do a fabulous job of bringing history alive. These events give us a small taste of what The Round Table tournament may have been like.


In Winchester Castle, hanging from the wall, is a large round tabletop. On this tabletop is the name of various knights of Arthur's court.

The Winchester Round Table is pretty old. The current paintwork dates back to the 1522 state visit of the Holy Roman Empire, Charles V. Henry VIII was on the throne of England then. Can you hazard a guess as to how I know that just from looking at the table? 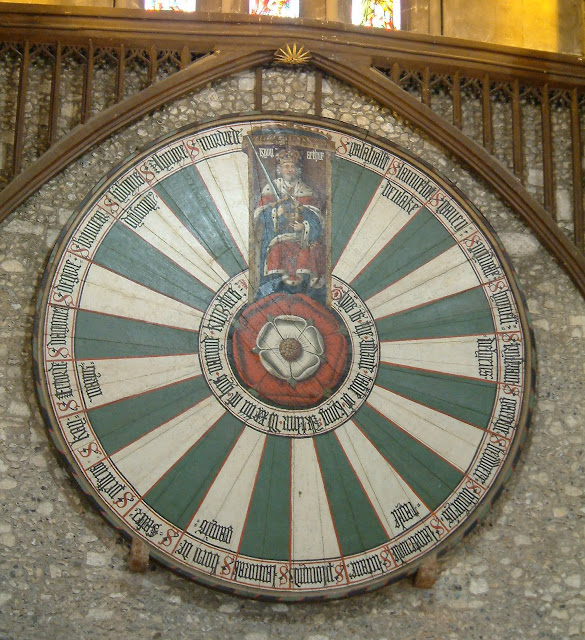 I have enlarged the picture as far as it will go, so you can see it more clearly. In the center of the table is the Tudor Rose and the King seated at the top, isn't Arthur - It is Henry.

The table is considerably older than the paintwork and was commissioned during the reign of Edward I (1239-1307). For those who want to know, Edward I -  also known as Edward Longshanks - had a bit of a problem with the the Welsh and then the Scottish - some chap called Wallace caused him no end of trouble. 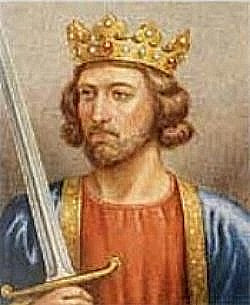 This table was commissioned for the Round Table even that he held in 1284 and 1302. Like everybody else he was fascinated with Arthur and his knights as well, but we are talking about Edward Longshanks - he always had another agenda. It seems that he used his interest in Arthurian myths to serve his own political interests. He thoroughly discredited the Welsh claims that Arthur would come to their aid. Arthur was dead, and besides he was a English hero, not a Welsh one.  It is said that he recovered "Arthur's Crown" from Llywelyn, after his conquest of North Wales.

But back to the table. Martin Biddle, a British archaeologist and academic, discovered, after a close examination of Edward's accounts, that the table is linked to a tournament Edward held near Winchester on April 20, 1290, to celebrate the betrothal of one of his daughters.

So there we have it. I think we should celebrate The Round Table again. It sounds like it could be a really good day out.
Posted by Mary Anne Yarde at 15:35

Email ThisBlogThis!Share to TwitterShare to FacebookShare to Pinterest
Labels: The Round Table festival. Arthur Pendragon. The Knights of the Round Table. Winchester Round Table Myths and Legends. King Arthur.