I love historical fiction. I love fantasy fiction too.

The Treasure of Gwenlais : The Rienfield Chronicles Book 1
by M.T. Magee, combines both genres.

Lets have a quick look at the story. 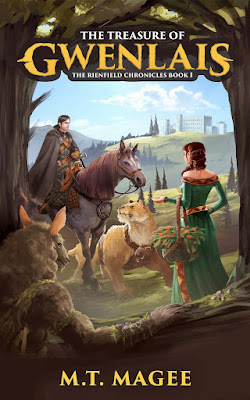 It is said that it is easier to hate, than to try and understand a race that is so different from our own. The Rabkin are such a race. They are a frightening species, feared by the humans, for they are renowned to be exceptionally swift killers and a deadly force to be reckoned with.

Prince Caleb of Heathwin, longs for peace and security for his kingdom and he has secured a fragile alliance between his people and these mysterious creatures.

But dark forces move against this delicate alliance. Unexpectedly a tribe of Rabkin attack a small defenceless village in the neighbouring  kingdom of Gwenlais. These Rabkin are different from the others - they have no respect for life or for death - and they bear different markings to the resident Rabkin tribes. They are strangers, outsiders, mercenaries.

Princess Laurel of Gwenlais is just seconds away from death. The Rapkin have murdered her much loved mother - the Queen of Gwenlais - and they are now hunting her. Prince Caleb saves the princess just in time. This blatant disregard for life shocks him, and knowing the Rapkin as he does, he cannot understand it.

Laurel and Caleb have always been close, despite living in separate kingdoms, and the events that are about to unfold draws them closer together. But their newfound love is as fragile as the peace between the kingdoms and there is an unknown enemy that threatens to destroy everything...

What did I think?

The joy of Kindles is that it tells you roughly how long a book is going to take you to read. According to my Kindle it was going to take me just over 31 hours to read The Treasure of Gwenlais. So either my reading speed is exceptionally slow or this book was incredibly long. Turns out it was the latter! I have to be honest, I would not normally even attempt to read a book that is this long - I just have not go the time to devote such a large portion of it to one book, but the description of the story intrigued me. After doing some quick calculations in my head, I realised that each chapter was going to take me over an hour to get through. So I quickly decided that if Chapter 1 did not hook me in, then I would give the rest of the book a miss. Two hours later I looked up from the book to check the time, and realised that I was late for an appointment!

I absolutely adore the world that Magee has created. I am trying to think of something to compare it to - think of the dramatic backdrop of Game of Thrones, a pinch of Narnia, a dash of Lord of the Rings and a very large splash of the greatest romance you have ever read and you may be getting somewhere. Actually, I don't think even that description gives it justice. Dare I say...this book is an original?? If there is such a thing.

The attention to detail is exquisite. It is almost an hour-by-hour chronicle of what is happening in these peoples lives - but instead of becoming bogged down in the detail, which is always a risk when writing like this, it just gave me a thirst to read more. It became almost like an addiction. This book monopolized all my spare time and I became ever so slightly anti-social for a week or so!

Magee is obviously passionate about her Irish and Scottish ancestry and the world she has created has a whisper of the kingdoms of the ancient Celts. Although in her world, it is perfectly acceptably to drink tea and eat dainty sandwiches! Rightly so. And occasionally a man eating plant will try to kill you...such is life.

Every single one of the characters that you meet in this book is not only unique, but also believable. She breathes life into every single person she talks about, be it a hero or villain. King or servant. Human or Rabkin.

I adored this book. I loved the world, the characters, the plot, the intrigue and the romance. What a beautiful, beautiful story.

I am so glad I took a chance and read Chapter 1. What an adventure I would have missed out on if I had passed it by. Now hurry up, Magee, and write book 2. I want to find out what happens next! 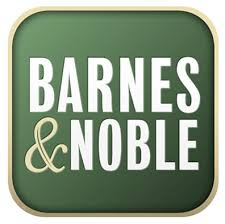 My name is M.T. Magee and I live in New England on our small farm with my husband and son. We raise an assortment of silly goats, quiet rabbits, far too many ducks and chickens, and a high strung Border collie cross named Gronk. I have always loved fantasy and fell in love with Tolkien at age eleven. I read all of his works at age twelve. I have been writing stories since I was ten years old and have always wanted to be an author. After fulfilling my dream of becoming a nurse, marrying the love of my life and having two wonderful sons, I have finally been able to fulfill my dream of publishing my first book. My youngest son is severely disabled and I am his full-time caregiver. The long winter months here in New England make it virtually impossible to go out very often, so I used this time to begin my story, The Treasure of Gwenlais. Fifteen months and 1144 pages later, I am very happy to present my story to all of you. I love strong female characters, who are still able to convey a sense of vulnerability and be very relatable. I also love strong male leads who are not afraid to show their soft side. Love of family is important to me as I am sure it is to everyone and I convey this in my story.