It is with the greatest of pleasure that I welcome Historical Fiction author, Joan Fallon, on to the blog. Joan is going totell us about her inspirations behind her fabulous book… 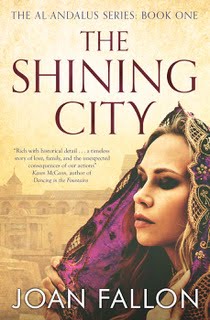 This is the story of a city, a city that is now in ruins: Madinat al Zahra.  The year is 947 AD, a time when southern Spain is under the rule of the Moors. The ruler, Caliph al Rahman III is rich, powerful and cultured. His lands are, at long last, at peace and the capital, Córdoba, is considered to be not only the most beautiful city in the civilised world but also the seat of learning and culture.  Against this background we meet the artisan Qasim - he and his family have moved to Madinat al Zahra to make their fortune as potters. Qasim is a good husband and father.  He works hard, says his prayers and keeps out of trouble. But Qasim has a secret; his past is not what it seems. When a stranger arrives asking questions about him, he is worried that his secret will be discovered and everything he has worked for will be destroyed. He has to take action. 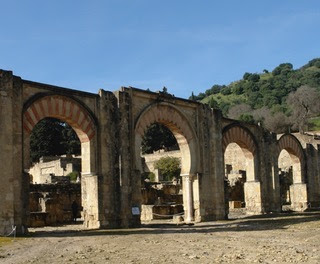 The first book in my historical fiction series, The al-Andalus trilogy, is called ‘The Shining City.’  It is a novel based on the story of a family of Moorish artisans—potters—who lived in the 10th century in southern Spain, only a short distance from where I am living now. Since moving to Spain I had become fascinated with the country’s Moorish heritage and long considered writing a book set at some point during the 700 years of their occupation.  The reason I was inspired to write this particular story was because, back in 2000, I picked up a leaflet about an exhibition of Umayyad art that was to be held in a place called Madinat al-Zahra, just outside the city of Córdoba.  The Umayyads were the rulers of the Muslim world until the 8th century and rulers of Spain after that for almost 250 years. The exhibition was excellent but I was more impressed by the site they had chosen for it: Madinat al-Zahra. This was the ruins of a palace/city built by Abd al-Rahman III just after he proclaimed himself Caliph of al-Andalus—the name that was given to present day Andalusia.  The city was reputed to have been the most wonderful in the western world and covered the entire hillside—25,000 men worked on constructing it.  Abd al-Rahman III himself had 400 rooms in the palace.  It was filled with marble and gold, exquisite engravings and silk hangings, a palace fit for a caliph.  It was said that 800 loaves of bread were used each day just to feed the fish in the fountains and lakes. And what was even more fascinating to me was the length of time that the city was in existence.  Work was started on it in the year 936 AD and only 70 years later it was already abandoned, and falling into decay.  For the next thousand years it was looted, its beautiful buildings broken down and used as building materials—you can find pillars and masonry from the city incorporated in the building of neighbouring cities, including Málaga—until it was as it is today, a ruin. This is the place that inspired my novel. 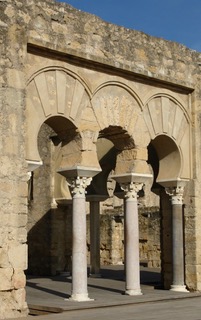 I have always been interested in social history and so decided to write the story of a Moorish family of artisans who had gone to Madinat al-Zahra to work but before I could start I had to learn something of what life was like, not just in that city but in Moorish Spain in the 10th century.   It was a time known as The Golden Age, a period of peace and stability, with a culture and civilisation far beyond the rest of Europe.  The more I read, the more I became impressed with the achievements of those early Moorish conquerors and was surprised to learn that the women of the time had much more freedom, education and rights than one might imagine.

The title of the novel comes from the Arab word, Zahra which means brilliant or shining.  Considering the amount of gold and precious metals used in the construction of the palace, it seemed appropriate to call my novel ‘The Shining City.’

But the inspiration didn’t stop there because I soon became aware that not only did the city itself fall into decay but the Umayyad dynasty was destined to end within two generations. Abd-Rahman III’s son and heir was homosexual and it was thought he would never produce an heir. The incredible story of how he was manipulated into producing two sons forms the basis of the second book in the trilogy. It is very true that truth can sometimes be stranger than fiction. 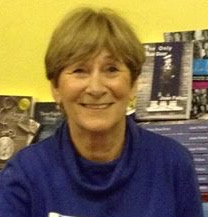 Born in Scotland, Joan Fallon has always wanted to be a writer. Books are her passion and she grew up reading everything she could get her hands on. Although writing was always a major part of her work, both as a teacher and later, as a management consultant and trainer, it wasn’t until ten years ago that she had the opportunity to devote herself to being a novelist. It was when she moved to Spain that she decided that the time had come to take her writing seriously. She enrolled in an Open University course in Creative Writing - the same university where she obtained her Bachelor of Arts (Honours) Open in the early eighties - and hasn’t stopped writing since. Because her working life, during the 1970s and through to the nineties, was that of a woman struggling for recognition in a man’s world, almost all her books have a strong female protagonist. She writes mainly about women and the challenges they have to face because she understands them best. She also likes to write about the past, but not kings and queens, rather the social fabric of society. To date she has written four historical novels, five contemporary novels and one book of non-fiction. Joan is a member of the Society of Authors and the Alliance of Independent Authors.
Useful Links
Website
Twitter
Facebook
Linkedin
Posted by Mary Anne Yarde at 08:00