It is with the greatest of pleasures that I welcome Historical Mystery author, Diane Rapp on to the blog today. Diane is going to tell us all about the inspiration behind her fabulous book, Golden Legacy. Let’s take a quick look at the book!! 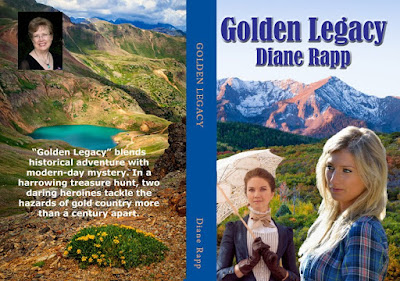 GOLDEN LEGACY blends historical adventure with modern-day mystery in an exciting novel available in e-book and print.  Readers follow the stories of two daring heroines as they tackle the hazards of gold country over a century apart.

Ginny is an English gentlewoman traveling alone in the year 1888.  Having reached the age of twenty-five, she deems herself a spinster, admitting that the circumstance stems from personal choice.  Ginny’s travel plans drastically alter when a telegram arrives—her brother Johnny was shot by bandits. Rushing by train from San Francisco to Colorado takes less than a week.  After tending to Johnny’s comfort, the plucky woman strikes out to deliver supplies to Nick.  He is a family friend, and Johnny’s business partner, who remains stranded at a secret gold mine.  Packing one mule with supplies and riding another, Ginny dodges miscreants to escape from town. She follows a hand-drawn map through perilous terrain armed with courage, a fountain pen, and two sharp hatpins.

In the modern story, Kayla learns that she must find the family gold mine to inherit a family legacy. Ginny’s journal, along with clever clues hidden by other ancestors, guides Kayla and her friends into hazardous mountains. These puzzles were designed to prove an heir’s courage, ingenuity, and honesty.  Dangers conjure nightmares that terrify Kayla and test her mettle.  Can she conquer old fears to unlock a golden legacy and launch her new life with Steven?

A seed for the idea of GOLDEN LEGACY was planted in my mind when our family moved to Ridgway, Colorado years ago.  The spectacular San Juan Mountain range surrounds the mining towns of Telluride and Ouray. Small towns sprang up to support intrepid miners who searched for gold, silver, and other minerals in treacherous granite cliffs of Colorado.

The area’s rich history prompted me to read real-life accounts like TOMBOY BRIDE and FATHER STRUCK IT RICH.  But the roots for the book idea germinated when I read A LADY’S LIFE IN THE ROCKY MOUNTAINS.  This was a journal written by Isabella Lucy Bird about her travels through Colorado.  Miss Bird was an English gentlewoman who traveled alone during the 1800s, a rough-and-tumble time in Colorado history. In the mountains Miss Bird encountered an English ex-patriot, a ruggedly handsome man with a reputation for violence and hard drinking. However, his English manners emerged when he interacted with Miss Bird. As I read the account, I detected a romance between them but the relationship failed.  Unfortunately real-life accounts are bound by actual events. As an unsatisfied reader, I wondered how I might tell such a story and include a romance.

Roots for my book idea spread as I developed characters to inhabit the story during modern times.  After completing my High Seas Mystery trilogy, I thought it might be “fun” to transport familiar characters into the magnificent mountains of Colorado.  They’d search for a family gold mine, following clues from a journal written by a plucky ancestor.  Lots of fun? It was a year’s worth of hard work!

The project sprouted tender young leaves, but I didn’t realize how much research was needed to write an historical novel.  History demands accuracy.  I confirmed railroad routes to Colorado in the 1880s, learned how sleeping accommodations on those trains worked, researched inventions of the period, and viewed pictures of fashions. To immerse myself in the proper language I read historical novels set during the period.  I built a “family tree” from Ginny down to Kayla, using approximated life-cycles to decide how many women had completed the family quest before Kayla.  By establishing names, dates, and histories, I built a back story for an entire family who left clues for later heirs.

Leaves on the project grew broader as I established Ginny’s personality.  I wrote her entire journal (in the first person) to keep my mind focused on the correct language.  While living near Ouray, we toured the Bachelor Mine and drove terrifying trails through surrounding mountains in a 4-wheel drive vehicle. I imagined how scary it could be to ride a mule over the same terrain.  Of course miscreants provided another sort of peril for Ginny!

After I finished the journal, the project started to produce tiny buds.  I changed mental gears and wrote the modern-day account, filled with different dangers and problems, including potential bad guys.  How could I merge the two narratives in a believable manner?  I decided that the modern characters could read episodes from the journal to slowly reveal Ginny’s story as they tackled puzzles about the mine.

Perhaps an ancestor, who learned photography, left framed pictures behind as clues. The beautiful Beaumont Hotel is an important landmark in both stories.  This hotel was recently renovated, so I contacted the current owners to request photos.  Jennifer Leaver was kind enough to supply me with a treasure-trove of photos to use in the book.  I “colorized” old-time photos to make them more vivid for Kindle Fire e-readers.  I also bought other photos that are displayed inside the book.  To see how the idea for this book burst into colorful blossoms, visit the “Golden Legacy” tab at my website and view a slide show and video.

The front cover of my novel shows the two heroines near Mount Sneffels, and the back cover of the print edition shows Lake Como.  This real-life lake is a sparkling turquoise gem high in the mountains near my fictional gold mine. Photographer Rose Krohn Epps provided me with a license to use her vivid photo of Lake Como for the cover, interior, advertising, and articles about the book. 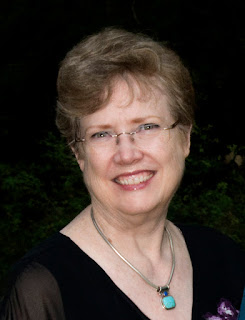 Diane Rapp became an entrepreneur when she started a dog grooming salon in Santa Barbara, California. She spent the next thirty years as a small business owner; she sold real estate, owned an office supply/copy center, and performed free-lance advertising design. During those hectic years Diane wrote stories as a cure for insomnia.  After onsite research and writing a Caribbean tour guide with her daughter, Diane decided to write a mystery series set on cruise ships.  Each book is a stand-alone novel with enough information to satisfy new readers. 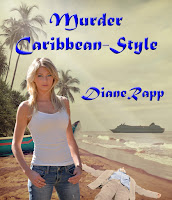 MURDER CARIBBEAN-STYLE is the first book in the High Seas Mystery series.  Readers meet the main characters and learn about life aboard a ship while solving the murder of Kayla’s ex-lover, Patrick.  He made plenty of enemies on the entire cruise line.  Kayla needs to learn what caused Patrick’s personality change—after a visit home he abruptly turned into a womanizer and thief.  She doesn’t want her friends accused of the murder. When she teams up with Steven Young, a handsome British magician working undercover for Interpol, danger and romance are mixed with the action. 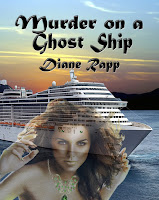 MURDER ON A GHOST SHIP is book two of the series.  Cruise line Chairman, Emily Schultz recently bought a new ship but there is a very unhappy ghost aboard, causing trouble.  Kayla and Natalia are summoned back to work.  They must get rid of the ghost before the pesky phantom sinks Emily’s career.  When Steven joins the team, angry smugglers track him down with deadly intentions.

The third book in the series, MURDER FOR GLACIER BLUE takes readers on a wedding cruise to Alaska.  Kayla and friends gather together preparing for her wedding on Glacier Bay but an art heist and murder threaten to ruin the wedding.  The security team must guard valuable paintings displayed next to authorized copies.  The copies are due to be auctioned for charity, but valuable originals give thieves targets to steal.  Wedding plans hit a snag when Steven’s ex-wife arrives on the arm of his childhood friend. She’s intent on creating trouble. Photos of actual Alaskan attractions are mixed into the narrative as readers take a virtual cruise, solve an art heist, and arrest a killer.